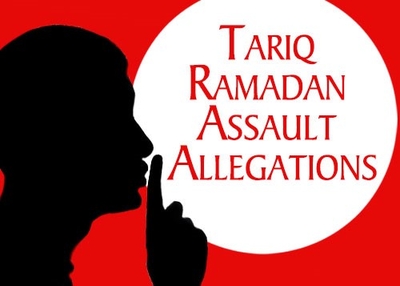 It's never fun when one of your favorite celebrities gets accused of wrongdoing. The home team quarterback faces a DUI, or a politician gets caught with his hand in the cookie jar. You can choose to face reality that the hero may not warrant your devotion, or try to pretend you never saw it.

When it comes to Tariq Ramadan, heir to modern Islamist thought and one of the world's most recognizable Muslim scholars, American Islamists seem intent on looking the other way.

At least four women have accused the Oxford University professor of sexual assault or harassment – making him one of the latest high-profile men to be accused of past misconduct after Hollywood mogul Harvey Weinstein's fall last month. Oxford announced Tuesday that Ramadan is taking a leave of absence "by mutual agreement."

Compared to Weinstein and others, there are few voices taking up the cause for Ramadan's accusers. Some of it may be cultural: Ramadan often has urged Muslims to treat controversial religious issues such as stoning adulterers and female genital mutilation as an "internal discussion." But there's also the fact that Ramadan has been quite helpful to American Islamists over the years.

Rape is a form of oppression.

Last month, he spoke at a conference organized by Georgetown University's Saudi-endowed Center for Muslim-Christian Understanding.

Center Director Jonathan Brown, Georgetown's Prince Alwaleed bin Talal Chair of Islamic Civilization in the School of Foreign Service, also spoke at the conference. Brown generated attention earlier this year with a lecture that argued it isn't "morally evil to own somebody" and that sexual consent is a bit of a myth because no individual is genuinely autonomous.

In the wake of the Ramadan allegations, Brown linked without comment to a Huffington Post op-ed on his Facebook page emphasizing that a person is innocent until proven guilty. 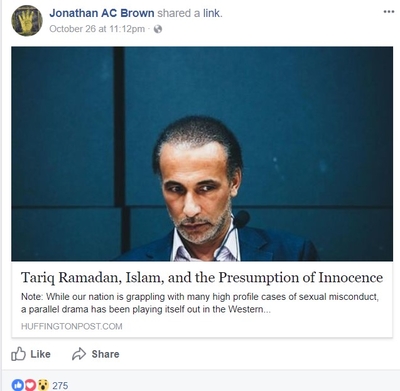 Beyond that, leaders from Georgetown, CAIR, ISNA, ICNA or MAS have had little to say about the possibility Ramadan may be a sexual predator. Some were less reticent when it came to judging people in similar cases. 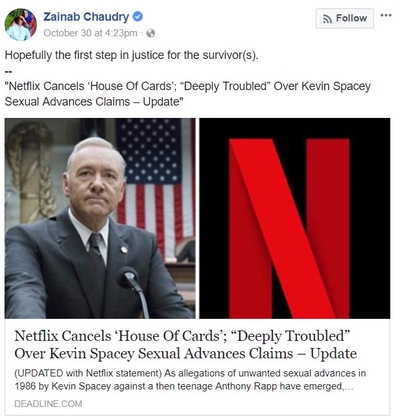 "Hopefully the first step in justice for the survivor(s)," she wrote Monday. She has not expressed concern for the women who say Ramadan assaulted them.

As the Weinstein scandal unfolded, CAIR-Chicago Executive Director Ahmed Rehab took to Facebook to call out the powerful producer as "Another bloated old predator creep - to add to the list alongside Roger Ailles [sic] and Bill O'Reilly - fawned over by society and rewarded with wealth and fame, even as he luxuriated in sociopathic predatory behavior for decades with no accountability.

"Well, it is time for liberals and those on the left to quit the double standard. The same outrage rightly shown to the fallen icons of the right better be shown to this trash human."

He urged people to "Pay close attention to what happens to Weinstein if anything, and how the mainstream media and Hollywood deal with this."

Five days later, Rehab noted that three women accused Weinstein of rape – one accuser fewer than Tariq Ramadan has today – and blasted the "hundreds of enablers, including the biggest stars..." A news outlet called 26 actors and directors to ask about Weinstein. "None responded," Rehab wrote.

Rehab has made no direct comment about Ramadan. On Oct. 28, however, he reposted Ramadan's statement announcing his plans to sue one accuser for slander. In an exchange with a commenter, Rehab predicted "the truth will eventually prevail in such a way that will be indisputable." While he generally believes a woman accuser, "the specifics of any case take precedence for me over the generally speaking."

Weinstein threatened to sue the New York Times after it published a story detailing the number of women he paid to stay quiet about abuse allegations.

At least in the initial claim against Ramadan, those who sided with him were quick to argue that his accuser disagrees with them politically, so she must be making it up. Henda Ayari is described as a former Salafi Muslim who left the faith and became a secular activist.

Ahmed Bedier, a former CAIR chapter director who still helps the organization raise money, called Ayari a mentally ill Islamophobe and "a hero to the anti-Muslim movement and Israeli groups in Europe."

In a New York Times profile, Ayari does acknowledge losing custody of her children for two years following a nervous breakdown. But Bedier failed to provide the context: it was brought on by the stress of fleeing from an abusive Salafi home that was described by a social services worker as a prison. She wore the jilbab and niqab – full body coverings – with the story describing her husband's view that it was "the female garb that most pleased Allah." She rarely was allowed out of the home.

In a related exchange that same day, Bedier said he would normally give the accuser the benefit of the doubt. But in this case, blaming her is okay because "the accuser is an anti-Muslim activist accusing the leading Muslim figure in Europe."

He does appear to have weighed in on subsequent accusers.

After trying to discredit the alleged victim, Ramadan may be targeting one of the messengers. His lawyers say they may sue French journalist Caroline Fourest for "witness tampering," she wrote Friday, adding that she met alleged victims as far back as 2009.

A self-described Muslim feminist has stayed mum about the prospect a leading Muslim voice, and the grandson of Muslim Brotherhood founder Hassan al-Banna, could be a rapist. Linda Sarsour is a leader of the Women's March movement.

As the number of Weinstein accusers increased, the March's Twitter feed expressed appreciation and admiration for their courage. "You are not alone," it said.

Tuesday morning, after the New Yorker published Ronan Farrow's follow-up detailing Weinstein's use of private investigators, including one company comprised of ex-Israeli security officials, to try to thwart investigations into his sexual predations, Sarsour wrote that the story "literally gave me chills."

Neither the March nor Sarsour has expressed similar solidarity with Ramadan's accusers. He defended Sarsour in January, when she faced criticism from liberals who were uncomfortable with her leadership for the Women's March. "There is nothing bigots fear more than strong Muslim women," he wrote, "and that this community will not stop standing up for itself and all the marginalized in the face of hatred and bigotry."

What about sexual assault?

Tariq Ramadan remains innocent until proven guilty. But public judgment changed dramatically with other men as more accusers emerged and a pattern of behavior became clear. A former French official has acknowledged that Ramadan long has had a reputation for womanizing, and that it sometimes included violence. At least four women say that they can attest to that.

At some point, attacking the victims or imagining it will all go away no longer works.