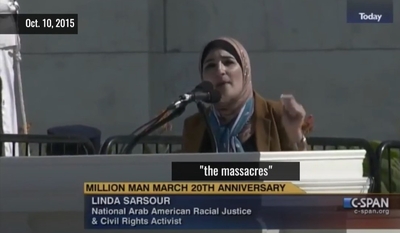 In a hyper-politicized world, it can be easy to forget that two things can be true at once.

The New York Times seems to have fallen into that hole Sunday, in an article that largely whitewashed antisemitic activist Linda Sarsour. She is identified as a victim of a Russian troll farm's 2017 campaign to smear her due to her faith. Sarsour had just helped lead the original Women's March, which drew hundreds of thousands of people to protests throughout the country.

"What she saw on Twitter that Monday was a torrent of focused grievance that targeted her," the Times reported. "In 15 years as an activist, largely advocating for the rights of Muslims, she had faced pushback, but this was of a different magnitude. A question began to form in her mind: Do they really hate me that much?"

"It was like an avalanche," she told the Times. "Like I was swimming in it every day. It was like I never got out of it."

And here's where two things are true: There apparently was a Russian troll operation that aimed at exacerbating divisions within American society. And Sarsour has long been one of those divisive voices, with an anti-Israel obsession that repeatedly crosses into antisemitism.

Long before the Russians targeted her, Sarsour went on Russian-owned RT America television in 2012, blasting American law enforcement. She claimed that "Islamophobia" fits in a continuum of American atrocities including slavery and the genocide of native Americans.

That same year, she claimed that the "Underwear Bomber," a Nigerian man who set his pants on fire trying to blow up a Detroit-bound passenger plane carrying 292 passengers and crew members on Christmas day in 2009, was recruited not by al-Qaida, but by the CIA. 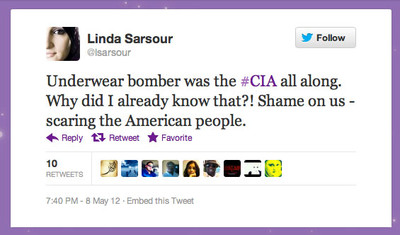 In fact, Umar Farouk Abdulmutallab's father did warn the CIA about a month earlier that his son had connections with al-Qaida terrorists. But there was nothing close to Sarsour's representation. Remarkably, that post remains on her Twitter feed a decade later.

"Russian trolls didn't make Linda Sarsour and Tamika Mallory amplify the conspiracy theory that the @ADL and Israel train US law enforcement to brutalize people of color," New York writer John-Paul Pagano noted Monday. "That disinformation is their own initiative, designed to pit African-Americans against Jews."

The Times story "dubiously rehabilitates the reputation of a person who was justly taken down for promoting the estrangement of Blacks and Jews," said Pagano, who authored a lengthy dissection into the problems facing the Women's March due to Sarsour and her colleagues' antisemitism.

It's not the first time. The Times profiled Sarsour in 2015, describing her as "a Brooklyn Homegirl in a Hijab." Two months later, Sarsour spoke at the 20th anniversary of avowed anti-Semite and Nation of Islam leader Louis Farrakhan's "Million Man March."

Well before any Russian troll operation, Sarsour used her time to blame American police violence against black people on a program that takes American police leaders to Israel. "The same people who justify the massacres of Palestinian people and call it collateral damage are the same people who justify the murder of black young men and women," she said.

It is a blood libel she spread repeatedly.

"If you believe in the idea of ending police brutality and the misconduct of law enforcement officers across the country," she told the Islamic Society of North America's 2018 convention, "then you do not support an organization that takes police officers from America, funds their trips, takes them to Israel so they can be trained by the Israeli police and military, and then they come back here and do what? Stop and frisk, killing unarmed black people across the country."

There simply is no data, and no participant's account, to support this claim, an Investigative Project on Terrorism investigation found. If anything, it has led to policies which can reduce deaths in police confrontations.

The Times article acknowledges that Sarsour and the Women's March had problems before any Russian interference. It cited the departure of founder Vanessa Wruble after a confrontation with antisemitic undertones.

And it cited concerns progressive Jews had about whether their participation was welcome, especially after "ultimately indefensible" statements by Sarsour.

Months before the 2017 Women's March, Sarsour made it clear that she didn't want to work with anyone who didn't share her views on Israel and Palestine.

"We have limits to the type of friendships that we're looking for right now," Sarsour told the American Muslims for Palestine (AMP) 2016 conference. "And I want to be friends with those whom I know have been steadfast, courageous, have been standing up and protecting their own communities, those who have taken the risk to stand up and say – we are with the Palestinian people, we unequivocally support BDS [boycott, divestment and sanctioning Israel] when it comes to Palestinian human rights and have been attacked viciously by the very people who are telling you that they're about to stand on the front line of the Muslim registry program. No thank you, sisters and brothers."

She really said it, CAIR. It's on tape. In fact, she thought the message was so nice, she said it [at least] twice.

In a 2017 interview with The Nation, she claimed people could not be both feminist and Zionist.

"It just doesn't make any sense for someone to say, 'Is there room for people who support the state of Israel and do not criticize it in the movement?' Sarsour asked. "There can't be in feminism. You either stand up for the rights of all women, including Palestinians, or none. There's just no way around it."

No Russians were involved in crafting that message. It's unfortunate that Sarsour was targeted by a foreign government. But the notion that progressive Jews wouldn't be concerned about her, or that her reputation as an antisemite might not have developed – as the Times story implies – ignores reality.