Over lunch in Istanbul last week, a friend and I spoke about the upcoming Turkish referendum. "Many European Turks are likely to vote 'yes,'" I cautioned my friend, whom I knew was planning to vote 'no,' or against the measure to grant President Recep Tayyip Erdogan unlimited powers. A "yes" vote, by contrast, would end the democratic parliamentary government established by Mustafa Kemal Ataturk, the founder of the republic, and in the eyes of most Western leaders, establish Erdogan as the Muslim world's newest dictator.

My friend was visibly angered. "Then let them, with all their rights and freedoms, come here to live," she retorted. "How dare they think that they can take these rights from us when we are the ones who have to live with the result?"

The outcome of Sunday's referendum showed a Turkey split almost exactly in half, with 51 percent "yes" and just under 49 percent voting "no."

It is too soon to make a full analysis of the vote results – which some rights groups have already contested – but one thing was immediately made clear: the vast majority of Turks living throughout Europe voted in support of Erdogan's rule, even as the majority of those living in major Turkish cities – Izmir, Ankara and Istanbul – voted against it. If only the votes of Turks living in the country had been counted, would the results have been the same? Or would they show that Turkey's residents support a secular, Western democracy while Europe's Turks do not?

If my friends in Istanbul who voted "no" woke this morning afraid for their country's future, so, too, should my friends in much of Europe. In the Netherlands, for instance, a whopping 71 percent of Dutch-Turks who participated in the vote chose "yes." As the results of the referendum became known, thousands descended on the Turkish Consulate in Rotterdam, waving Turkish flags and celebrating the victory of an Islamist leader who had pledged to "raise a new, religious generation," end secular education, and who has imprisoned countless journalists, writers, artists, and others who have dared to criticize him.

It was not only in Holland. According to the Daily Sabah, 75 percent of Belgian Turks who voted opted for "yes," as did 73 percent in Austria, 65 percent in France, and 63 percent in Germany. Only Switzerland, Sweden, and the United Kingdom showed majorities with "no" votes. And of these three, Sweden is effectively the only member of the EU. 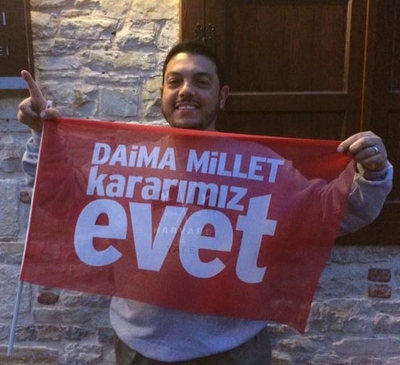 American-Turks, however, showed the greatest resistance, with 83 percent voting "no." Still, some prominent Islamist voices spoke out in support of Erdogan, including former Muslim American Society president and political activist Esam Omeish, who celebrated the referendum results on his Facebook page with a photo of himself holding a Turkish flag that reads "evet," or "yes."

In Europe, some have argued, as did "Volkan," a pseudonym for the owner of the popular DutchTurks.nl blog, that the results were self-inflicted, the result of having antagonized Turkey and Erdogan in recent months. Holland, for instance, refused entry to pro-Erdogan officials seeking to campaign on his behalf. Germany, where rallies were similarly blocked, has also been outspoken in its criticism of Erdogan's imprisonment of a German-Turkish journalist.

But such explanations do not account for the results in Austria and France, or for the similar outcome of the November 2015 election, in which majorities in Germany, the Netherlands, and France all voted for Erdogan's Justice and Development Party (AKP).

What I did not tell my friend, as we sat watching the sunlight dance over the Bosphorus, was that the European Turks who were voting to change the Turkish Constitution, who were effectively choosing to establish a more fundamentalist, Islamist Turkey in place of the secular, Western democracy that has been in place since 1923, have no interest in the "freedoms" that she spoke of. That they have them in Europe is meaningless: they don't want them. They don't want them in Turkey, where they come from; and they don't want them in Europe, where they now live. Not for themselves. And not for anybody else.

Indeed, as the IPT noted after the November 2015 elections, of the 4.6 million Turks living in Europe, a majority seems to prefer to live in an Islamic state, and not a secular one.

This is the frightening lesson that Europe must learn from the results of the April 16 referendum. While its leaders now confer about the "proper" response to Erdogan in his new role and what they expect of him as the leader of a clearly-divided country, they might also consider their response to his supporters who are not just Turkish citizens, but Europe's own. How to reckon with Europeans who choose against European norms and values, who actively vote against the separation of church and state, who seek a more Islamized society? What does this say about the failure of integration? More, what does it say – or threaten – about Europe's potential future? And what can be done to save it?