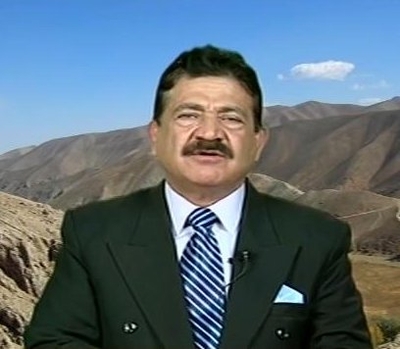 The father of Orlando mass shooter Omar Mateen has longstanding connections to prominent Islamist groups in the U.S., a document discovered by the Investigative Project on Terrorism shows. Seddique Matin is listed as president of a then-new American Muslim Alliance (AMA) chapter in Fort Pierce in a July 1997 announcement archived by the IPT.

The Fort Pierce chapter is among 10 new AMA chapters opened, the announcement in an AMA bulletin says. 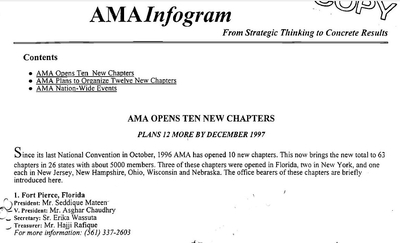 AMA was incorporated as a nonprofit organization in California in 1994 "to educate the Muslim community and others on the history and laws of the United States and on affirmative participation in civic activities on a non-partisan basis." AMA's political activist wing, the American Muslim Political Coordinating Council (AMPCC), includes leading Islamist organizations in the U.S. including the Council on American-Islamic Relations (CAIR), the Muslim Public Affairs Council (MPAC), and the American Muslim Council (AMC). 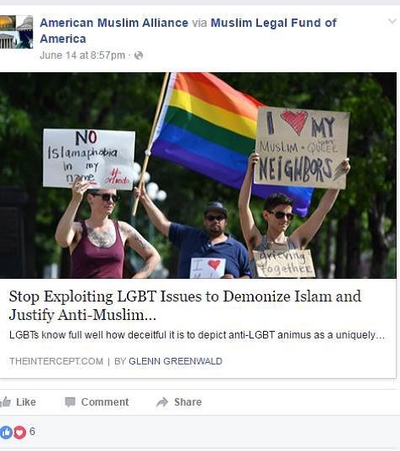 AMA no longer exists as a registered nonprofit and it last filed tax returns in 2010. But the organization continues to maintain an active Facebook account. In its posts, the AMA refuses to consider any Islamist motivation for the attack and lays the blame for Omar Mateen's massacre which killed 49 people at the Pulse nightclub solely on the country's lax gun laws.

The organization has a history of working with radical Islamist groups and has issued statements in support of several terrorists later convicted in the U.S. The FBI cut off outreach communication with CAIR, for example, after uncovering evidence placing the organization and its leaders in a U.S.-based Hamas-support network.

In October 2000, AMA co-sponsored a rally in Washington's Lafayette Park where AMC's then-executive director Abdurahman Alamoudi announced his support for Hamas and Hizballah.

In 2004, Alamoudi was sentenced to 23 years in prison for illegal financial dealings with Libya. He also confessed to taking part in a Libyan plot to assassinate then-crown prince of Saudi Arabia.

Saeed also penned an op-ed along with CAIR's then-national board chairman Parvez Ahmed that called for Al-Arian's release from prison during a subsequent contempt case. The op-ed criticized U.S. counterterrorism efforts claiming "the saga of Dr. Sami Al-Arian is a repeat of past incidents in American history in which our government targeted individuals using unconstitutional and un-American tactics."

Saeed advocated "armed resistance" at a 1999 Islamic Society of North America (ISNA) in Chicago: "United Nations has a resolution...which says... people in Palestine have the right to resist their oppression by using all means including armed resistance...." Saeed was featured as a guest speaker at Islamic Association for Palestine (IAP) conventions. Evidence unearthed in a Hamas-financing trial in Dallas, showed IAP served as a propaganda machine for the terrorist group in the U.S.

At AMA's 7th Annual National Convention in October 2002, Agha Saeed indirectly blamed the U.S. for the 9/11 attacks. Osama bin Laden was contemptible, he said. "But I would like to say very respectfully, who brought Osama bin Laden from Saudi Arabia to Afghanistan? Who gave him million[s] of dollars? Who trained him in [the] science of war, death and destruction, deception and deceit? Who gave protection to his cause and diplomatic coverage to his enterprise? Was it not President Reagan, when he had to see mujahideen at the White House, he said, 'When I meet you I feel as if I am in the company of the founding fathers of this country?'"

Years after working with AMA and its Islamist allies, the senior Mateen, who hosts the Durand Jirga Show from California on the YouTube channel Payam-e-Afghan, has been reported to be an ideological supporter of the Taliban. He can be seen in one video declaring his candidacy for the Afghan presidency. In another video, Mateen can be seen praising the Afghan Taliban and referring to the terrorist group as "our warrior brothers," the Washington Post reports.

While little information is known about Seddique Mateen's work with the AMA, the 1997 newsletter shows the Orlando shooter's father has worked for years with some of the most visible and radical Islamists in the United States.

Good information from your group, I would like to suggest that you research the possibility that all these terrorist have a father who has intermarried with their first cousin or other close family member and to try to link the mental deficiencies of these terrorist that could be the cause of their mental state that causes these people to want to be cajoled into being a suicide bomber or to take out their aggressive behavior toward women or use a gun to kill all the people that they have in the past and will kill in the future. I would like to see a serious discussion on this topic, So far I have not seen anything in the media about this condition.

England has so far spent about 600 million on taking care of these babies and children that have these serious mental and physical problems, according to what I have read on the subject, 30% of the Pakistani children born in England have these defects. This will be a future problem in America and will strain the healthcare system which is already push to it's limits on cost and services for our present citizens

San Bernadino shooters family also had ties to Islamists. Seems to me most violent Islamists come from Islamist sympathizers, at the very least. Also when I see CAIR jumping in to support families of Islamist killers, I usually suspect the whole family.

Gee what a surprise. Never mind, your President and his protege are working hard to dismantle the 2nd Amendment so there is some hope that gun restrictions will prevent , um, ordinary American Infidelophobes from buying suitable guns in the US for mass murder of Islamophobes. Still, they will easily be able to import decent automatic weapons through the wide open US/Mexican border.