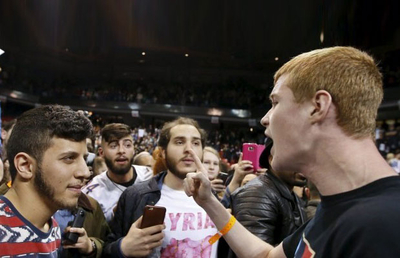 Voltaire – to whom variations on the quote "I may not agree with what you say, but I will defend to the death your right to say it" are attributed – is spinning in his grave after the events of the past weekend.

Protesters forced the cancellation or violently disrupted rallies organized by Republican presidential candidate Donald Trump, as the level of political discourse continues deteriorating over the 2016 election cycle. Ugly rhetoric is not limited to one party. Democratic presidential candidate Bernie Sanders has provided his own incendiary comments by routinely targeting the "greed, fraud, dishonesty and arrogance" of Wall Street bankers.

It more befitted the goon squads of Syrian President Bashar al-Assad or dictatorial strongman Vladimir Putin than citizens of a country founded by the principle that freedom of speech is the most fundamental freedom in the world. A principle that distinguishes fascist states from democracies.

Such activities in the U.S. are unfortunately nothing new. For years we and many others have been accosted and heckled on college campuses around the country, most recently by Brown University students and clergy just three weeks ago over views concerning balancing accepting Syrian refugees with U.S. national security.

In 2010 Muslim students carefully plotted a heckling campaign for a lecture by the Israeli ambassador at University of California, Irvine because he represented the policies of the Jewish state.

The George Soros-funded MoveOn.org Political Action not only credited itself for the violence in Chicago, but promises more.

The Council on American-Islamic Relations (CAIR) and the Muslim Public Affairs Council (MPAC) supported the 11 students who obstructed the Israeli ambassador from speaking. CAIR stated: "Delivering this message in a loud and shocking manner ... falls within the purview of protected speech." MPAC added "These students had the courage and conscience to stand up against aggression."

The trademark of Code Pink and Black Lives Matter is to disrupt congressional hearings, public events and speeches by political candidates, even those on the left. They argue that nasty heckling is constitutionally protected.

Well, no, their behavior is not a constitutional right if they are suppressing the ability of others to voice an opinion. Somehow they must have missed their primary civics lesson in school about the First Amendment of the U.S. Constitution, which guarantees the right of free speech to those with whom they disagree. But if they want to hold their own independent rallies in which they scream expletives, it is their right to do so.

Some are trying to make excuses for and defend those who are disruptive and perhaps threatening safety and security. Cable news talking heads even blamed Trump for daring to hold an event in Chicago.

After radical Islamists murdered four Americans in Benghazi, Libya in 2012, former Secretary of State Hillary Clinton told the family of one of the victims that the filmmaker who produced an anti-Muhammad film that nobody's ever seen – yet somehow "inspired" the attack – would be arrested and prosecuted. She didn't mention any retribution for the jihadists who actually attacked the facility.

In public and private political gatherings, where perhaps 10,000 or more people took the time and effort to attend, their constitutional right to hear a candidate's views is routinely ruined by deliberately planted agitators.

The adult adolescents are no doubt looking to blame their actions on what others say, but they are the only group who can be held accountable for their uncivilized and obnoxious vitriol. It says much more about them than those they are protesting.

American political leadership needs to speak up against those who are illegally denying the right to free speech to others merely because that "other" free speech offends them. The silence from our president and the Civil Rights Division of the Justice Department is deafening.

Attempts to suppress speech are all hallmarks of activity sanctioned by the ruling mullahs in Iran, the Islamist terrorists running Gaza, the brutal dictator unleashing genocide in Syria or the tin men running South American dictatorships.

People might disagree with Trump's political positions, they might not appreciate Sanders vilifying Wall Street, they might not like an immigration process that protects U.S. security first, and they might not agree with American foreign policy, but living in the United States means respecting the ability of all citizens to speak freely and having the right to be heard.

And it is precisely what decided my vote in the Republican primary. I am voting for Trump as a vote FOR free speech and against the notion, now prevalent on campuses, that it is acceptable, even desirable and justifiable, to disrupt someone else's speech if one finds it offensive. The notion that one should use counter speech (not simultaneous disruptive speech) is now a foreign concept to them and to Soros and his Moveon.org crowd.. They don't even realize they are supporting fascism in this country--or they do, and pretend they don't.