This oped was written for the Washington Times. Video of Hoekstra's attempts to complete his remarks appears below. 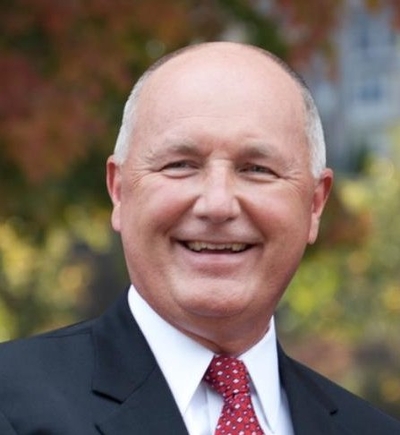 Accepting Syrian refugees into the United States is an emotional issue.

People are suffering and dying in Syria and throughout the broader Middle East. The grotesque nature of the situation is very real. Innocent Christians, Jews, women, homosexuals and children are being killed, sold as sex slaves and brutalized. Nobody in America wants that.

Nor, however, does anybody in America want ISIS and other radical Islamist groups to exploit the refugee crisis to export their savagery to Europe and North America. ISIS has stated that it intends to infiltrate the hundreds of thousands of Syrian refugees fleeing the barbaric ISIS terrorists using their families as cover. The FBI director and director of National Intelligence said that U.S. intelligence and law enforcement cannot thoroughly vet the backgrounds of the tens of thousands of Syrian refugees the president has vowed to bring to the United States.

This week I was invited to participate in a press conference at the Rhode Island state capital where we requested that Gov. Gina Raimondo rescind her open invitation to Syrian refugees. Organizers wanted to first know how the federal government would ensure that the individuals and families who are permitted to enter the country will not threaten the safety and security of U.S. citizens.

It is a simple, straightforward concern that is as much about ensuring basic national security as it is compassion.

It soon became apparent that the press conference would not proceed cordially, with one side expressing its opinion followed by a competing press conference offering a different point of view.

I cannot broadly characterize the group I encountered in Rhode Island — organized by the United Council of Churches and students from Brown University — as anything other than ill-mannered and hate-filled. Rather than opening themselves to a polite discussion or allowing one side to present its facts and opinions, we were treated in a most uncivilized manner.

The type of behavior that occurred this week unfortunately is not unique. Earlier in February, protesters shouted down a conversation on Jewish identity led by actor Michael Douglas and human rights activist Natan Sharansky on the campus of Brown University. Anti-Israel hecklers delayed a lecture by Hebrew University professor Moshe Halbertal at the University of Minnesota in Minneapolis in November.

Also in November, faculty at the University of Missouri confronted a photographer and called for "muscle" to prevent him from covering an event held in a public space.

Some 30 campus groups objected to a speech at Yale University by Somali-born women's rights activist Ayaan Hirsi Ali in 2014. It happened within a few months of Brandeis University rescinding an invitation for her to speak following an outcry by a vocal campus minority.

I'm not OK with clergy, students and those of different opinions lying and expressing hateful speech in the name of love, but again it is their constitutional right. I'm not OK with their conduct, but in America we tolerate it, as obnoxious and spiteful as it may be.

I'm not OK with any of that adolescent behavior. I have never known it to solve problems or heal divisions.

The ugly demonstration at the press conference was a wonderful experience in how not to accomplish anything. I'm sure that those who disagreed with us felt that they had a good day. They were louder than everybody else. Congratulations, but what exactly did they achieve?

They did not succeed in reaching a consensus or fostering ideas on how to balance national security with welcoming those seeking to escape horrific circumstances.

Let's hope that someday those who proudly wore their clerical garb, those who identified as open-minded college students and those who were simply there to express a different opinion will learn that dialogue is better than swearing, that listening is better than screaming and that passion is good but it needs to be balanced with reason.

• Pete Hoekstra is the Shillman senior fellow with the Investigative Project on Terrorism and was chairman of the U.S. House Intelligence Committee.

Let's establish first that there are No Independent Terrorist Organizations in the middle east. That after the end of WWII, western & eastern nations were heavily invested in the middle east and the straights of Hormuz to control the bulk of petroleum imports. For that purpose, there is no rifle name Ahmed nor grenade named Saeed. The purpose of USA's creation, sponsorship & support of the Taliban is to fight the Russians in Afghanistan in the early 1990s, indirectly as a by-proxy army. To that effect Europe employed PLO, Fatah, Hamas, as their hatred of Jews & Israel, wheres Russia, N. Korea & China got Hezbollah. As years went by, USA has seen a decline in the effectiveness of such armies and employed even more to restart & respur motivation. Al-Qaeda was the new scapegoat for the U.S. Drug Cartel entry into Afghanistan, goal being cheap opium. CIASIS (ISIS/ISIL) was the latest psyop (arming both sides of war) to hit the middle east for the purpose of returning military to Iraq, to keep guarding the siphooning of free raw petroleum, as Exxon-Chevron-Conoco-BP-Shell have done for 20 years prior. So, to say export is erroneous, especially after giving them Military Oshkosh vehicles and air dropping supplies to them. Now for the proposed oil pipeline from Syria through Turkey and into Europe, eliminating Russia from the European petroleum market, the same group is being used. We are narrowly stepping into open war with Russia. So when you speak of Savagery, as them being a by-proxy army, you have to look in the mirror and see the savagery in US, even as passive, the traitor within is ten times more dangerous than the enemy at the gates.

Thank God for people like Pete Hoekstra and others who keep trying to get through to those close minded. If they would only listen, they just might learn something. If, after learning something new, they still want to believe what they believe, then fine. This is America. They are entitled to be "less than smart". However, I will continue to speak my mind, respectfully, to all those that will listen and I will continue to protect their right to free speech, no matter how uneducated they may sound.