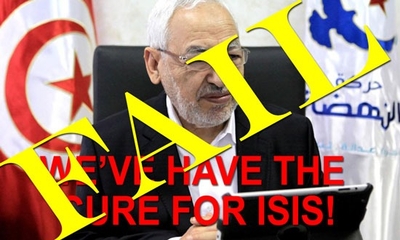 Sheikh Rached Ghannouchi, founder and head of Tunisia's Muslim Brotherhood-linked Ennahda Party, claims in a recent Time magazine column that his country offers the antidote to the poison spread by the Islamic State (ISIS).

That's an interesting claim, given that more Tunisians have gone to fight for al-Qaida ISIS than any other nationality. Within Ghannouchi's country, a Salafi-jihadi insurgency threatens the democratic gains made after dictator Zine El Abidine Ben Ali was ousted in 2011.

Many of these foreign fighters belonged to Ansar al-Sharia in Tunisia, an al-Qaida linked group designated as a terrorist organization by the State Department in 2014. A December tally by the New York-based Soufan Group found that approximately 6,000 Tunisians have joined the Islamic State. Some had suggested that democracy would sap jihadism's appeal, but the country's new openness has had the opposite effect.

It has given radical jihadists and their supporters greater openness to spread their ideas. The New York Times interviewed dozens of young Tunisians in October 2014, finding that many who believed ISIS offered their best chance for "social justice" and redistribution of the Gulf states' oil wealth.

A paper written by the Carnegie Endowment for International Peace blames the Salafi-jihadist movement's growth on a "passive attitude" by the Ennahda-led government, which ruled Tunisia after the 2011 revolution until early 2014.

Many Tunisian foreign fighters are college-educated but unemployed. This lack of opportunity fuels support for radical jihadists, according to an October article published by the Combating Terrorism Center at West Point.

But ISIS also has attracted support inside Tunisia. Ansar al-Sharia spokesman Seifeddine Rais declared his allegiance to ISIS and its leader Abu Bakr al-Baghdadi in 2014, right after the ISIS proclaimed itself a caliphate. Reports suggest that a suspected June ISIS attack on beachgoers also had a connection with Ansar al-Sharia members. The same was also true of the attack last March against the Bardo where ISIS also took responsibility.

Ghannouchi's Ennahda party failed to "to lead the country towards the economic and social improvement" during its time in power, Tunisia's former foreign minister Rafik Abdessalem told Mediterranean Affairs in a Dec. 21 interview. The Carnegie Endowment shares Abdessalem's opinion, noting that "Ennahda has not struck a healthy balance between politics and religion," which it says has helped the Salafi-jihadists grow in popularity.

Nonetheless, Ghannouchi wants the West to look to his country for inspiration.

"Tunisia's progress provides the best response to extremist groups' claims that Islam and democracy are incompatible," Ghannouchi writes in his Jan. 25 Time column. "We have held multiple free and fair elections, women are actively involved in government and political life, and we have a constitution that enshrines the rule of law, separation of powers and respect for human rights including freedom of conscience and expression ... The radical moderation and inclusivity adopted in Tunisia has ensured political and social stability, and maintained the momentum for democratic reform."

Ghannouchi argues that a religious counter-narrative depicting Islam as "a religion of mercy, respect, solidarity and coexistence" is needed to confront the Islamic State's "quest for political domination." Tunisia's model, he writes, shows that "political dialogue as the only way to overcome conflict – is a strong basis for gradual, sustainable change." 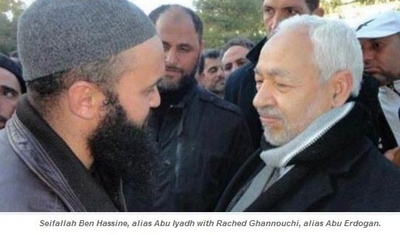 Those are wonderful sentiments, but they do not match Ghannouchi's own track record. He has embraced some of Tunisia's most radical elements, including Ansar Al-Sharia and its late leader, Abu Iyadh – a former Bin Laden ally sanctioned by the U.S. after 9/11. Abu Iyadh was responsible for al-Qaida's assassination of Northern Alliance leader Ahmed Shah Masood two days before the attacks on the Twin Towers and the Pentagon.

Video from January 2012 shows Ghannouchi meeting with Salafists – Muslims who believe in a literal interpretation of Islamic text – urging them to bide their time creating an Islamic state in Tunisia. He advocates Islamizing Tunisian society through peaceful means rather than violence.

"The secularists are still controlling the media, economy and administration. Therefore, controlling them would require more time," Ghannouchi says in the video. "I tell our young [S]alafists to be patient ... Why hurry? Take your time to consolidate what you have gained."

Ghannouchi also admits in the same video to meeting with members of Hizb ut-Tahrir, a radical Islamist group that advocates a global caliphate, and leaders of the al-Qaida linked Ansar al-Sharia in Tunisia.

He has done little to deter the foreign-fighter phenomenon. In fact, the Lebanese news website NOW News reported in October 2014 that Ghannouchi supported Tunisians who went to fight in Syria. He allegedly told the parents of two young men who went to fight in Syria that it was "better for your son to die in Syria than here. He will be a martyr and he will mediate for you on Judgment Day. Fighting Bashar al-Assad is better than staying here."

Ghannouchi told "Good Morning Egypt" that the ultimate goal of the Islamist movement is to restore the Caliphate, a goal shared by Hizb ut-Tahrir and al-Qaida, but he did not have a timetable for how long that would take.

Ghannouchi condemns terrorism against fellow Tunisians, but he describes Israel as a land of jihad. He also maintains close ties with Hamas.

"The jihad is in Palestine, not on Mount Chaambi," Ghannouchi said in a 2013 talk with young Tunisian Salafists, referring to jihadist activity in north central Tunisia.

Ghannouchi's support for Palestinian terrorism stretches back decades, and led to the U.S. government banning him from the U.S. in 1994. The Obama administration ended the ban in 2011 after Ennahda won big in Tunisia's elections. He visited the U.S. numerous times since then and met with State Department officials on two occasions.

Back in 1990, Ghannouchi spoke at a conference in Tehran, Iran where he advocated the "destruction of the Jews" and invoked Ayatollah Khamenei's "call to jihad" against America, "the Great Satan. The allies of Zionism are the allies of Satan."

He also called for a global financial institution that would fund an "Islamic army" to "liberate" Palestine and other "occupied" Muslim lands. He advocated for the development of "an Islamic civilizational project that spans all humanity" to stoke the flames of "rebellion and Islamic resistance everywhere."

Evidence suggests not much has changed in recent years despite his effort to position himself as a moderate. In a 2010 speech, Ghannouchi declared "wherever there is occupation, there is an answer: Jihad. It is an action to liberate Muslim homelands remaining in foreign occupation."  Ghannouchi praised Hamas in his official biography on the Arabic website of the International Union of Muslim Scholars, saying that its approach of "[r]esistance [to Israel] restored hope to the Islamic Ummah."

In 2011, Ghannouchi said co-existing with Israel was "like an attempt by the body to coexist with cancer." Ghannouchi praises Hamas in his official Arabic biography, saying the "approach of Hamas in Resistance restored hope to the Islamic Ummah."

He played a key role mediating the April 2014 reconciliation agreement between Hamas and Fatah and posted a photo of himself alongside Hamas leader Khaled Meshaal on his Facebook page in August 2014.

As recently as October, Ghannouchi issued a call to fight against Israel, saying they had a "historic opportunity to support this Intifada, support the Palestinians, and liberate Jerusalem."

These statements encouraging jihadist murder should give pause to any Westerner who wants to buy into Ghannouchi's claim that his country, his way, is the path away toward peace.

​"There are smart and dumb Islamists," said Middle East Forum founder Daniel Pipes. "The smartest of them (like Ghannouchi) accept aspects of modernity and use non-criminal and violent tactics. The dumbest​ of them (like ISIS) strain to live as in the seventh century and deploy crazed tactics. Naturally, the smart ones not only disassociate themselves from the dumb ones but even use the dumb ones to their own advantage: 'Work with us or look what  you'll reap' goes their message. But that's not the case. Working with any Islamists forwards their joint cause and should always be avoided."