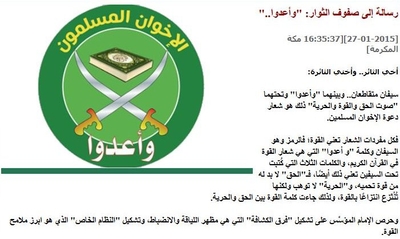 Egypt's Muslim Brotherhood, hailed as a moderate voice and welcomed by officials in the Obama administration just this week, issued separate statements on its English and Arabic websites this week that appear to contradict each other.

A call for "a long, unrelenting Jihad" appeared on the Brotherhood's Arabic language website Tuesday. The statement, first reported Friday by the Washington Free Beacon's Adam Kredo, starts by invoking a passage from the Quran: "And prepare against them whatever you are able of power and of steeds of war by which you may terrify the enemy of God and your enemy and others besides them whom you do not know but whom Allah knows. And whatever you spend in the cause of God will be fully repaid to you, and you will not be wronged."

On its English language website Friday, the Brotherhood struck a dramatically different tone in an article in which it "Reiterates Commitment to Non-Violence."

"The Brotherhood should not have to – every day – reiterate its constants, its strategic stance and chosen path of civil peaceful struggle to restore legitimacy...," it said.

It does when it posts a call to prepare for jihad invoking assembling the "steeds of war by which you may terrify the enemy of God."

The English posting says Brothers who stray from non-violence "no longer belong in the Brotherhood, and the group no longer accepts them, no matter what they do or say."

As the IPT has shown, offering mixed messages in Arabic and English is routine for the Brotherhood.

On Thursday, a speaker on a Brotherhood-affiliated television station warned foreign tourists and business interests to leave Egypt next month, or risk becoming a "target for the revolutionary punishment movements." A similar statement was posted on Facebook.

The dueling statements come just after the four-year anniversary of the Arab Spring uprising that toppled dictator Hosni Mubarak and led to the Brotherhood's rise to dominate Egyptian government in his wake. But that rule was short-lived, as President Mohamed Morsi was forced from office by Egypt's army in July 2013, after millions took to the streets to protest the government's performance.

This week, dozens of people were killed in protests marking the 2011 revolution. A delegation of exiled Brotherhood officials visited Washington this week, urging support to return Morsi to power.

It was in that context that the Arabic call for jihad was published. According to the Free Beacon, it invoked Brotherhood founding ideologue Hasan al-Banna, who "prepared the jihad brigades that he sent to Palestine to kill the Zionist usurpers..."

"For everyone must be aware that we are in the process of a new phase," the statement concludes, "in which we summon what of our power is latent within us, and we call to mind the meaning of Jihad, and prepare ourselves and our children, wives and daughters, and whoever marches on our path for a long, unrelenting Jihad. We ask in it the abodes of the martyrs."