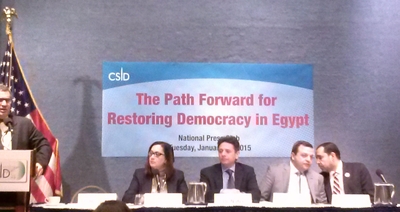 A delegation including senior exiled members of Egypt's Muslim Brotherhood and two people with a history of open support for Hamas lobbied senators Wednesday.

The delegation requested a meeting with several senators, a Senate source told the Investigative Project on Terrorism (IPT).

The delegation sought help in restoring former President Mohamed Morsi and the Muslim Brotherhood to power in Egypt. Morsi-era parliamentarians, government ministers and judges formed the Egyptian Revolutionary Council in Istanbul, Turkey last August with the aim of toppling Egypt's military government. It is based in Geneva, Switzerland.

The delegation arrived in Washington Monday and will leave Thursday, according to a brief provided to the Senate offices. A Facebook post Wednesday by former Egyptian Judge Waleed Sharaby showed him alongside fellow delegation members on Capitol Hill.

Sharaby's Facebook page shows him at the State Department on Monday. In a Facebook posting Thursday, Heshmat claimed he met with "a representative of the White House" as well. "The voice of the Egyptian revolution must be loud everywhere," he wrote.

Sharaby and Heshmat have openly expressed support for Hamas.

Heshmat's Facebook page features a picture of him posing with Hamas Chairman Khaled Meshaal. He told the IPT that he met Meshaal during a conference in Doha, Qatar last June, and said he did not have a "continuous relationship" or a "dark relationship" with the terrorist leader.

The Muslim Brotherhood leader has a long history of supporting Palestinian terrorists. Heshmat "wants to send weapons to the Palestinians, and even send Egyptians to fight," Deborah Amos reported in 2002 for "NOW with Bill Moyers."

Heshmat denied making the statement when the IPT asked about it Tuesday, saying all he had ever favored was sending "humanitarian aid" to help the Palestinians.

In an August 2012 Facebook posting, he denied that Muslims were responsible for a terrorist attack in the Sinai. "[I]t is unreasonable that the Muslims carried out such an incident, because if it were a jihadist operation, it would be the first inside Israeli territory," the Egyptian newspaper Al-Masry Al-Youm reported.

He blamed "an American Zionist plot" for Egypt's military crackdown on the Muslim Brotherhood in August 2013. In a Facebook posting last July, Heshmat called Israeli Jews "the descendants of pigs and monkeys" who were fighting against the "Palestine of Jihad."

"Or shall I tell you how this blessed movement developed the thought of resistance in record time and under the circumstances in which it was impossible to verify that these results? From throwing stones at the enemy, to stabbing him with a knife, to the sniper shot, to the IED, to martyrdom operations in the heart of the Zionist Entity, to the short-range missiles, to the long-range missiles to attack Israeli military units which made the people of Israel go into bunkers!!!"

The State Department defended the meeting in an email to the IPT. "We meet with representatives from across the political spectrum in Egypt."

Before coming to Washington, Dardery, Sharaby and Heshmat participated in a forum in New Jersey sponsored by Egyptian Americans for Freedom and Justice, which an Egyptian newspaper describes as a "Brotherhood organization." The forum was also attended by noted Islamist leader Mohammed Qatanani.

Heshmat and Sharaby arrived in the U.S. on Jan. 20, according to the Facebook page of Egyptian Americans for Freedom and Justice.

Appearing at an event Tuesday sponsored by the Center for the Study of Islam and Democracy (CSID) at the National Press Club, Azzam called the discussions with the State Department "fruitful."

"There was an overlap and a common reading of the situation, of the threat of the current regime to human rights and the rule of law," Azzam said regarding the feedback her delegation received from the State Department. "They welcomed the continued engagement with us."

Delegation members told the State Department that support for President Abdel Fatah Sisi's regime ran contrary to American values and national interests. They asked the U.S. not to get in the way of the Egyptian people's "fight for their own freedom," Azzam said.

Tuesday's CSID event emphasized the Sisi regime's killing, torturing and jailing of political opponents. Speakers pointed to a 2014 Human Rights Watch (HRW) report that found that Sisi and the Egyptian military were likely guilty of "crimes against humanity."

The military government killed thousands of Egyptians, jailing thousands of innocent protesters and imprisoning over 40,000 political dissidents of all stripes, according to Azzam , including liberals, Islamists and others.

Nafei accused the media of creating "a complete fabrication" about the idea that the Muslim Brotherhood wished to create a religious state both before and after the military ousted President Mohamed Morsi in July 2013.

The delegation urged Egyptian-Americans of all stripes – Coptic Christian and Muslim – to unite against the Sisi government. Dardery asked Copts, who have overwhelmingly supported Sisi, to come to their side.

"The constitution that was made in 2013 … states clearly that all Egyptians are equal," Dardery told the IPT. "There is no difference between a Christian, a Muslim and Jew.

Dardery's sentiments did not convince Michael Meunier, a Coptic leader and Sisi supporter who embraced the 2011 revolution early on. The Brotherhood was behind violence that has swept Egypt since Morsi's fall, Meunier told the IPT from Cairo. He noted that Coptic churches were burned by the Brotherhood's supporters, and St. Mark Cathedral in Cairo was attacked by Islamists during Morsi's tenure.

Meunier had terse words for the State Department, saying that meeting with this delegation furthers the perception that the U.S. was behind the Brotherhood's rise to power and heightens tensions between Egyptians and Americans.

One thing you can always count on Obomber doing is giving aid & comfort to enemies at war with us.

So, this comes as no surprise.

I'm just surprised Obeyme's letting us do a little bombing of IS targets in support of the Kurds.

Maybe the general in charge of what's going on with IS lies to him to get his support.

Several reporters asked Jen Psaki about this today and she said the only thing she could offer was that Georgetown University arranged and funded these meetings. It is nothing out of the ordinary as the State Dept. often participates in these MB confabs that include previous Parliamentary members from Egypt.