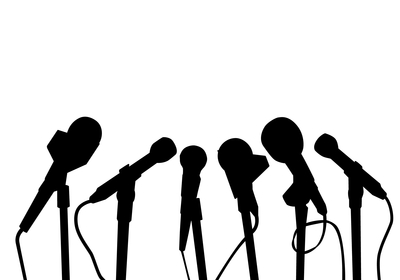 More than a dozen American Muslim leaders condemned the Islamic State's (IS) brutal tactics as contrary to Islam Wednesday during a press conference held at the National Press Club.

But in doing so, several speakers urged the public to ignore the terrorist group's theological motivations.

Talib Shareef, imam of Masjid Muhammad in Washington, D.C., exhorted the media to refer to IS as the "Anti-Islamic" State because its actions run contrary to the teachings of Mohammed.

Another speaker, former Council on American-Islamic Affairs (CAIR) Tampa director Ahmed Bedier, later wrote on Twitter that IS "is not a product of Islam," and blamed America for its emergence.

Haris Tarin, Washington director of the Muslim Public Affairs Council (MPAC), moderated the event. It included noted Muslim leaders such as Imam Mohamed Magid, former president of the Islamic Society of North America (ISNA) and member of the president's Homeland Security Advisory Council; Johari Abdul-Malik, an imam at the Dar al-Hijrah Islamic Center in Falls Church, Va.; and Humera Khan, head of the group Mufflehun, which aims to keep young Muslims from radicalizing.

"Long years of experience have shown us that this problem cannot be solved by law enforcement and security measures alone," Gersten said. "Local communities are the front line of defense and response, and are essential in identifying recruitment, especially as Syrian-based groups look to target Westerners."

Gersten noted that local law enforcement and members of the Muslim community should be the first line of defense against those intent on becoming jihadists.

Several speakers reiterated their constant refrain since the 9/11 attacks that Islam has nothing to do with terrorism, noting the 2005 fatwa against terrorism issued by the Fiqh Council of North America – an organization that currently includes Jamal Badawi, who has endorsed suicide bombings.

Humera Khan offered condolences to the mothers of beheaded American journalists Steven Sotloff and James Foley, saying their murders had nothing to do with Islam. She and Tarin both emphasized that young Muslims need to be taught that the rhetoric used by jihadist recruiters has nothing to do with authentic Islamic teaching.

"Just because someone uses Islamic terminology does not make one a Muslim," Asma Hanif, executive director and board member of the Baltimore-based Muslimat Al-Nisaat, women's shelter.

Magid called IS a "cult" that had nothing to do with Islam because it has killed more Muslims than anyone else, demolished mosques and killed Christians in Iraq.

"All of this is against the foundation and teaching of Islam," Magid said. "It was our Prophet Muhammad, peace be upon him, who said whoever mistreats a Christian or a Jew, or any person of another faith, I am his enemy on the day of judgment.

"The Holy Qur'an says whoever takes one life it as if he has taken the life of all of humanity, and anyone who saved one life; it is though he has saved all of humanity."

The Investigative Project on Terrorism challenged Magid, citing Surah 9:29 of the Quran, which IS invokes to justify killing Christians. It says: "Fight those who do not believe in Allah or in the Last Day and who do not consider unlawful what Allah and His Messenger have made unlawful and who do not adopt the religion of truth from those who were given the Scripture - [fight] until they give the jizyah willingly while they are humbled."

Christians have become subject to the jizyah, or poll tax, since IS seized Raqqa in Syria earlier this year and Mosul in Iraq earlier this summer. Those subject to the jizyah face death if they refuse to pay or convert to Islam. IS similarly cited the Islamic law book known as "Reliance of the Traveler" to justify killing Yazidis and requiring them to convert to its brand of Islam to be spared.

Magid insisted that IS had acted outside of the bounds of Islam, noting that Muslim scholars never mandated killing all non-Muslims in Iraq or Syria during the 1,400 years before IS came into being.

Ironically, IS makes a similar argument against Muslims who criticize the group. Those are not true Muslims, IS claims.

The strategy of disowning radicals and denying their theological motivation is a losing one, argued James Brandon in an article Tuesday.

"When moderate Muslim groups use takfirism (calling Muslims with other views apostates) to tackle extremism, this dangerous and intrinsically intolerant doctrine is therefore not challenged but is instead reaffirmed," wrote Brandon, an associate fellow at the International Centre for the Study of Radicalisation and Political Violence (ICSR). "A better approach is to accept that Islamist extremists, however distasteful their view of Islam, remain Muslims, however much other Muslims, and non-Muslims, might dislike their version of Islam."

At Wednesday's news conference, Magid discussed the need for programs aimed at Muslim youth to counter the jihadist narrative that has led to over 300 American Muslims to fight for IS and other jihadist groups in Syria and Iraq over the past three years. The jihadists' theological arguments needed to be countered point by point, he said.

"There's nothing cool about being a jihadist! You're a loser!" said Johari Abdul-Malik, whose mosque has been home to numerous individuals arrested in connection with jihadist plots. "I want to point out that I am black! We never conflated the actions of the KKK with Christianity."

But one of Abdul-Malik's colleagues at Dar al-Hijrah, Shaker Elsayed, endorsed the concept of violent jihad as recently as February 2013. During a talk at a Northern Virginia high school, he preached that Muslim men would be last in line except if it was for "arms for jihad."

America's Muslim community provides the first line of defense against terrorists acting in the name of Islam, they said. Abdul-Malik suggested imams are eager to work with the FBI to counter terror.

"We are on the front line because we are the ones who are in the chat rooms and on Facebook talking to them and saying, 'You know what, brother or sister, I think they just went over the line,' and the data shows that we are the best defense," Abdul-Malik said. "I have a message for law enforcement. First, I want to thank you … because myself, and other imams, sometimes we get an agent who comes in our office and says, 'Do you know something about this person or that person?'

"We tell the truth and have saved the lives of many people."

Abdul-Malik's sentiments are not shared by other American Muslim groups.

CAIR, which portrays FBI agents as ruthless schemers out to set up Muslims for trumped-up charges, was noticeably absent from Wednesday's news conference. Its Minnesota chapter obstructed FBI investigations into al-Shabaab's recruitment of Somali Muslims in the Twin Cities, and its San Francisco chapter published a poster saying: "Build A Wall of Resistance: Don't Talk to the FBI."

Another group, the Assembly of Muslim Jurists of America (AMJA), which counts Magid as a member, published an article in 2008 written by Hatim al-Haj, a member of its fatwa committee, saying that working for the FBI was "impermissible" because of the "harm they inflict on Muslims."

Who are you going to believe...

Who are you going to believe, your lying eyes or these experts?