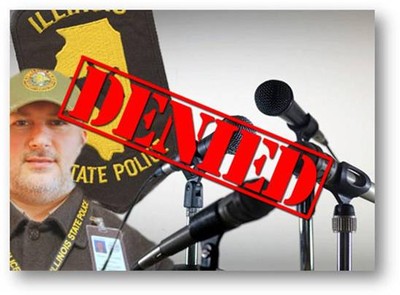 A federal judge in Chicago has dismissed an imam's claim that the Illinois State Police (ISP) discriminated against him when it rescinded the imam's appointment to be a volunteer chaplain.

Kifah Mustapha's appointment as the ISP's first Muslim chaplain was reversed after the Investigative Project on Terrorism reported in January 2010 that he was named an unindicted co-conspirator in a Hamas financing trial which ended with sweeping convictions in November of 2008. Mustapha was identified as a member of a Muslim Brotherhood-run Hamas support network in the United States, and was a paid employee of the network's official fundraising arm, the Holy Land Foundation for Relief and Development. Records show he spent five years as the charity's "sole employee in its Illinois office."

Mustapha, an imam at the Mosque Foundation in the Chicago suburb of Bridgeview, did not tell the state police about his Holy Land Foundation connections when he originally applied for the chaplain's post. He passed an initial review and announced his appointment.

But state police officials took a second look after reading the IPT report. They verified the information about Mustapha's Holy Land Foundation work and saw a videotape entered into evidence which showed Mustapha singing a song praising Hamas and jihad.

An FBI official told state police that Mustapha would not pass their background check for a similar position. The ISP rescinded Mustapha's appointment, and he sued. He tried to attack the IPT's credibility as part of his litigation.

He also claimed "that he condemns Hamas and any suicide bombings, and instead he teaches against terrorism," U.S. District Judge Ronald A. Guzman wrote in his order granting the state summary judgment.

During a deposition, Mustapha claimed the video, showing a child holding a machine gun on stage as Mustapha and others sing, "O Hamas, raise the banner of Jihad … through it or through martyrdom," was not an endorsement of the terrorist group, but actually meant something quite benign. When the singers name Hamas, he said, they were "referring to the Palestinian people, that Hamas means 'excitement' in Arabic and the use of the word 'jihad' in the song related to the struggle of the Palestinian people for freedom and equality," Guzman wrote. Mustapha "acknowledged that others might interpret the invocation of 'Hamas' as referring to the terrorist organization."

But the ISP saw the video quite differently.

While Guzman wrote he was not judging the facts of the case, he found that concerns about hiring Mustapha by the state police were "well-founded given the [IPT's] earlier blog entry posted soon after Plaintiff went through chaplain orientation criticizing the ISP for selecting Plaintiff given his purported ties to terrorism."

Mustapha also claimed he was discriminated against due to his religion and ethnicity. But, Guzman noted, the state police originally hired Mustapha knowing his heritage and that he is a Muslim. "It was only after finding out about Plaintiff's past conduct, i.e., that he had been employed by HLF, was named as an unindicted co-conspirator in a federal terrorism trial, appeared in a video in which individuals are toting guns and chanting 'O, Hamas, teach us the rifle' and 'O, Hamas, raise the banner of jihad,' and learned that Plaintiff would not pass the background check to be a volunteer chaplain with the FBI that the ISP decided not to retain Plaintiff as a volunteer chaplain."

Mustapha was represented by attorneys for the Council on American-Islamic Relations (CAIR), which similarly was implicated in the Holy Land case as part of a Muslim Brotherhood-orchestrated Hamas support network in the United States. Internal documents show CAIR was a member of the Palestine Committee, and two CAIR founders appeared on a Palestine Committee telephone list.

Their filings claimed Mustapha had no knowledge of what the Holy Land Foundation did with its money, that the original IPT report was a dubious source, and that Mustapha – despite the court evidence – is a peaceful man who preaches against terrorism. Letters of support from Arab and Muslim organizations that Guzman reviewed portray Mustapha as "one of the most influential Islamic leaders in Illinois and a role model to Muslim youth and adults."

Those groups appear to have put all their eggs in Mustapha's basket, despite the record.

If the ISP still has no Muslim chaplain, it is not for lack of effort, Guzman wrote. After determining Mustapha was unacceptable, state police sought other candidates. No one applied, "and the only responses the ISP received in response to requests for additional candidates made to Muslim organizations throughout Illinois were recommendations in support of" Mustapha.