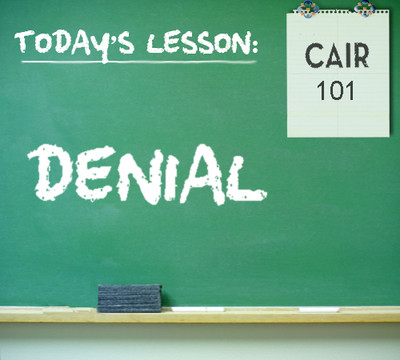 Making the absence of proof a proof of its own, the Council on American-Islamic Relations argues that the FBI's failure to identify Tamerlan and Dzhokhar Tsarnaev as terrorist threats before the Boston Marathon bombings proves that counter-terror stings don't work. That's among a series of fatuous claims and misguided recommendations in written testimony CAIR submitted to a House committee last week.

The testimony minimized the theological underpinnings driving terrorism by al-Qaida and other Islamists and offered instead a series of grievances and misguided policy recommendations that do nothing to avoid future attacks like Boston's.

CAIR long has cast FBI terrorism sting operations as entrapment, an argument rejected by Attorney General Eric Holder and one that has never proven successful in court. Its proponents are wrong on the facts "or do not have a full understanding of the law," Holder said in 2010.

Yet, in its testimony, CAIR said it "believes that stings should be executed to prevent crime, not create criminals." Rather than stopping people like the Tsarnaevs – committed to waging jihad in the United States – CAIR said successful stings "contributed to a false sense of security within the FBI that led to its agents missing a more well-guarded threat like Tamerlan Tsarnaev. While well-publicized FBI sting operations create an official narrative that the government is preventing acts of terrorism, they have little to no effect in stopping real tragedies like the Boston attacks, the Fort Hood shooting, the growing list of mass shootings in places like Virginia Tech, Tucson, Arizona, Newtown, Connecticut, and Aurora, Colorado perpetrated by disturbed individuals, or near misses like the failed Times Square bombing." [Emphasis original]

Under this logic, law enforcement gets no credit for interdicting a terrorist attack before anyone is hurt, but it gets the blame when people like the Tsarnaevs slip through the cracks. As we've noted, sting operations include numerous opportunities for the suspect to back out, but when they choose not to, the investigations thwart people determined to carry out mass casualty attacks in public places.

The assumption is that wannabe jihadis who take to the Internet seeking help, or otherwise vocalize their desire, would never be able to make deadly explosives without FBI assistance. But looking at Tamerlan Tsarnaev and his stoner kid brother before April 15, would anyone expect them to have the ability to make two successful shrapnel-laden bombs, and coordinate their explosions so efficiently?

For example, in its testimony, "CAIR wholly condemns" Mohamed Mohamud's attempt to detonate a car bomb at a Portland Christmas tree lighting ceremony crowded with children and their families. But CAIR "believes that the FBI advanced Mohamud through the process of radicalization, enabled, and pressured him at a point where he could have possibly abandoned such violent ideologies." [Emphasis original]

"This was an individual who was given a number of opportunities to desist from his course of action, but who at every turn decided that he wanted to continue," Holder said in late 2010. "But for the interaction that he had with the FBI, he might have come in contact with somebody who, in fact, would have made his plans tragically real."

In court papers, prosecutors pointed to recorded evidence which showed that Mohamud "planned the explosion, he identified the target, he planned out and practiced the routes, he conducted surveillance, he purchased parts, and he armed the bomb after guiding it to the final target. Moreover, defendant unquestionably took a substantial step towards detonating the truck bomb on November 26, 2010, when he punched a telephone number into a phone that he believed would detonate a bomb."

CAIR's recommendation would mean ignoring Mohamud's publications in an online magazine called Jihad Recollections and his attempts to contact people who could help him travel to Pakistan for jihad training.

CAIR has a contentious relationship with the FBI, dating back to the FBI's 2008 decision to cut off outreach communication with the group, citing evidence in a Hamas-financing trial that tied the organization and some of its officials to both the Palestinian terrorist group Hamas and Egypt's Muslim Brotherhood. Internal records of a U.S.-based Hamas support network listed CAIR among the group's member organizations. "[U]ntil we can resolve whether there continues to be a connection between CAIR or its executives and HAMAS," a senior FBI official wrote in 2009, "the FBI does not view CAIR as an appropriate liaison partner."

In 2010, a Justice Department official said there was no "new evidence that exonerates CAIR from the allegations that it provides financial support to designated terrorist organizations." And FBI Director Robert Mueller reaffirmed the ban on working with CAIR during congressional testimony in April, 2011.

Mueller's agents obtained the evidence linking CAIR to terrorists, so their opinions carry some authority. Why the House Homeland Security Committee saw CAIR as a credible voice to chime in on counter-terror efforts, and the FBI's actions, is difficult to fathom.