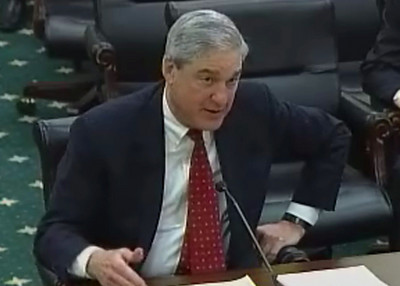 The FBI should shut down web sites carrying al-Qaida propaganda on American-based servers, including its English-language magazine, if it has the ability and legal authority to do so, a ranking member of Congress said Wednesday.

The capability exists, Mueller said, but there are questions about the First Amendment and the likelihood that the radical content would simply migrate to other websites. Mueller acknowledged that young Americans are being radicalized by jihadist content on the Internet, especially the sermons and writings of American-born al-Qaida cleric Anwar al-Awlaki.

In addition to ideological radicalization, many of those sites including training and specific instructions. Web sites bring the "sermons of Alwaki into the bedroom of teenagers anywhere in the United States," he said. The FBI is working to determine who is visiting such sites, Mueller said.

"We are trying to develop sources to identify people who are being radicalized and are seeking weapons or explosives …in order to carry out their intentions," he said.

While Mueller was on Capitol Hill to discuss the 2012 budget, he stressed the challenges the FBI faces if a budget compromise is not reached this year and the government is forced to shut down. It's a point he made last week before a Senate panel, when he said the FBI would face $200 million in cuts and would be forced to leave hundreds of vacant positions unfilled.

Money from important, but lower-ranked priorities would be diverted to ensure the Bureau's top priorities of counter-terrorism, counter intelligence and cybercrimes do not suffer. "Investigations will continue unhindered," while new initiatives and some training would take a hit, Mueller said.

Much of that threat comes from individual radicalization fueled by the Internet. Al-Qaida affiliates in Yemen and Somalia aggressively target Westerners for recruitment. Among the examples is Inspire magazine, published by al-Qaida in the Arabian Peninsula. Each issue includes suggestions for "open source jihad" and step-by-step instructions for attacks.

"I know you can't take every site down," Wolf told Mueller. "But that magazine is out there and it ought to be taken down."

He also urged Mueller to continue the FBI's policy of not working with the Council on American-Islamic Relations (CAIR), even though it is the nation's most visible Muslim advocacy group. The FBI's cut off came in 2008, based on evidence tying the group's founders to a Hamas-support network in America.

Mueller did not say much in response. "We have no formal relationship with CAIR," he said when asked if the policy continues. He has made similar statements before other congressional committees this year and cited concerns with the group's national leadership.

He said he was aware of a poster published by CAIR's San Francisco chapter which urged people to "Build a Wall of Resistance" by not talking to the FBI.

That poster, Wolf said, "is a telling example of how CAIR has sought to prevent individuals from cooperating with law enforcement, or at the very least to present themselves as the only legitimate channel for doing so."

Wolf then read from a letter sent by Executive Director Nihad Awad to Libyan dictator Muammar Gaddafi seeking money for a CAIR project. Last month, the Investigative Project on Terrorism reported on a face-to-face appeal Awad made to Gaddafi when the Libyan leader visited the United Nations in 2009. In the letter, Awad thanked Gaddafi for his generous support, Wolf said.

He asked Mueller whether the FBI knew if CAIR received any money from Gaddafi. Mueller said he would find out.

On other issues, Mueller said the FBI had developed intelligence showing terrorists in places like Pakistan and Yemen discussing getting people into the United States through the Mexican border. He declined to address any specific instances in the open hearing, but stressed that both the northern and southern borders are targeted by terrorists seeking entry into the country.

When it comes to questioning terrorist suspects, Mueller was open to legislation allowing a temporary exception to the Miranda rule so agents could inquire about plots or other conspirators. The FBI already has used "clean teams," agents who may question a suspect on such matters strictly for intelligence reasons. After they are done, criminal investigators may take their places and question the suspect further after reading him his rights.

"To the extent we can have flexibility in such situations, I am in favor of flexibility," Mueller said in response to a question from Rep. Adam Schiff, D-Calif. Sometimes, he cautioned, that exchange of agents might be counterproductive in that it makes it more difficult for agents to build a rapport with a suspect and persuade him to answer more questions.

Mueller also addressed questions based on media reports that FBI agents are questioning Libyan nationals in the United States. In some cases, it is to determine who might pose a threat of pursuing a terrorist act in retaliation for U.S. airstrikes against Gaddafi's regime. In others, it is an attempt to learn about the rebels fighting the regime and determine whether they have terrorist ties.

The FBI is in the front lines of an ideological war.

But when you won't name or define your enemy, you spend all your time in fantasy, nit-picking about whether your enemy should have the same rights as you.

When you won't name or define your enemy, your enemy wins by default.

Mueller should read and mull on the truths in The Art of War.