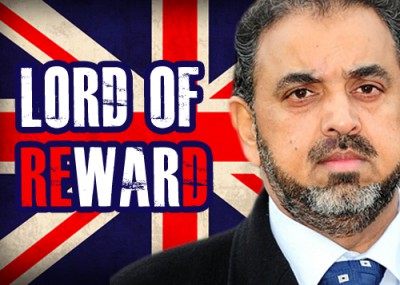 The first Muslim nobleman in England has been suspended from his political party following reports that he put a bounty on Presidents Obama and Bush during a speech Sunday in Pakistan. It is not the first time that Lord Nazir Ahmed has advocated on behalf of the worldwide Islamist causes.

It's also a damning indictment of how the British political system empowered and supported a radical Islamist, despite indications that his misuse of the position would convey legitimacy to extremist causes.

"If the U.S. can announce a reward of $10 million for the [capture] of Hafiz Saeed, I can announce a bounty of £10 million [for the capture of] President Obama and his predecessor, George Bush," Ahmed was quoted as saying by Pakistan's Express Tribune. The threat came during a seminar at Punjab University entitled "International Scenario, Pakistan and Our Responsibilities." It was a sharp response to an American reward for Hafiz Muhammad Saeed, the founder of Pakistani terrorist group Lashkar-e-Tayyiba, and an alleged planner of the Mumbai massacre in November 2008.

Ahmed was appointed the Lord of Rotherdam for life in 1998, during Tony Blair's reign as prime minister. He functions as a Labour Party representative for Britain's noble upper branch of Parliament, the House of Lords.

Ahmed indicated "that he would arrange the bounty at any cost, even if he was left with the option of selling all his personal assets, including his house," according to a report by Middle East Media Research Institute (MEMRI).

An article on the Punjab University's webpage independently confirms the threat and adds more details. It said that Ahmed told a "charged" university audience that former President Bush and Prime Minister Tony Blair must be indicted for war crimes, and he predicted that "Iran was likely to be attacked by the U.S. or Israel in order to get votes." If either nation did attack the Islamic Republic, "the Muslim nation [Ummah] should unite against these powers."

Britain's Labour Party immediately distanced itself from the comments and Ahmed. "We have suspended Lord Ahmed pending investigation. If these comments are accurate we utterly condemn these remarks which are totally unacceptable," a party spokesman told British news outlets.

The comments may be grounds for more than just suspension from his party. Former federal prosecutor Nathan Garrett told the Investigative Project on Terrorism that he "suspect[s] the authority exists for the British government to institute legal action against Mr. Ahmed, notwithstanding the fact that the comments were made in Pakistan."

The quotes could also cause the United States to declare Ahmed a 'persona non grata,' or enter the gray area of American prosecution if the threat matures into a plot. The danger of Ahmed's quotes may "creep its way into U.S. jurisdiction if some furtherance of the threat touches U.S. soil or otherwise involves (on the perpetrator side) U.S. persons," Garrett said.

Although multiple news sources have reported the quotes as accurate, Ahmed responded with surprise to news of his suspension. He claimed to not have offered any bounty, but merely suggested Britain and America had committed war crimes in "illegal wars" in Afghanistan and Pakistan. For those crimes, former leaders George Bush and Tony Blair "should be brought to justice," he said.

He also demanded that the British government prove he had made the quotes and told the BBC he was "shocked and horrified" at the accusations.

This isn't Ahmed's first brush with controversy. He has long promoted extremist causes to British and American audiences, including defending terrorists and lauding Islamists in both countries.

In February 2009, he sent a letter to President Obama questioning America's treatment of terrorist Aafia Siddiqui, an MIT-educated scientist who recently was convicted of trying to kill U.S. troops and federal agents in Afghanistan. Ahmed called for her to be repatriated to Pakistan.

In recently posted comments at the headquarters of the Islamic Circle of North America, an American organization known for radicalizing its membership, Ahmed denounced the prosecution of a recently convicted Pakistani lobbyist.

He called the prosecution of Ghulam Nabi Fai, who pleaded guilty to taking $3.5 million from Pakistan's terrorism-tainted intelligence forces, a "politically motivated" act. "The arrest and charges on Dr. Fai Sahib [the respected one] by American authorities was to apply political and moral pressure on Pakistan intelligence services," he said in an Urdu-language interview.

"People within America society, who support American nationalism, believe that Pakistan is not cooperating with America as before. The problem with America is that Americans think by giving dollars they can buy someone's faith," he said. "They think that by giving dollars they can murder a person or rape a person. They've made a habit of murdering and raping whether it is the case of Raymond Davis, or it is attacking Pakistani forces at checkpoints for 2 to 6 hours and making them martyrs."

In addition, he lauded pro-Hamas MP George Galloway as a "very big hero" and a "legend," referring to his outspoken colleague's actions as a "success of Muslims."

Ahmed expressed support for extremist South Asian organization Jamaat-e-Islami (JeI) Bangladesh during a 2012 ICNA meet-and-greet event. The Bangladeshi group's activities have been curtailed in its home country, its primary literature has been banned, and the national government has indicted JeI Bangladesh leaders for their roles in massacring civilians during the 1971 War of Independence. One of ICNA's current regional leaders, Ashrafuz Zaman Khan, reportedly will face charges as an executioner for the organization.

Ahmed called Jamaat-e-Islami "our Muslim brothers" and accused Bangladesh's leader of pursuing a politically motivated campaign influenced by India as an attack against Pakistan and its intelligence sources.

In England, he has rallied for Islamist causes. He came out in support of radical Israeli-Arab cleric Raed Salah [Mahajna], whom the British government tried to ban from entering the country for his Hamas fundraising activities and blatant anti-Semitism. Ahmed had tried to book a room in parliament for Salah to give a speech.

He advocated on behalf of al-Qaeda leader Mahmoud Abu Rideh, who was arrested after receiving refugee status in Britain, personally meeting with him and escorting him on a visit to the British Parliament. Rideh was later killed while fighting foreign forces in Afghanistan.

In 2010, Ahmed was booked as a speaker for a British tour of senior Jamaat-e-Islami Pakistan leaders. Qazi Hussain Ahmed, the chief presenter and former head of JeI Pakistan, was quickly banned from entering the U.K. for pro-terrorist and anti-Semitic quotes.

Ahmed has given other virulent bigots a stage in Britain's governmental buildings or defended their controversial remarks.

For example, he hosted a 2005 book launch in the House of Lords for anti-Semite Israel Shamir, who claims blood libels and supposed Jewish designs to conquer the world are real.

The series of controversies follows on the heels of Ahmed's conviction for "dangerous driving," after he was caught texting while driving before a fatal car crash with another driver. Although the Labour Party kicked him out at the time, Ahmed was let back in after serving 16 days of a 12-week sentence.

Ahmed's outrageous statement about two American presidents should come as no surprise to anyone who has tracked his career in the House of Lords. A brief suspension, or anything less than his removal from parliament, should draw vehement protest by the United States.