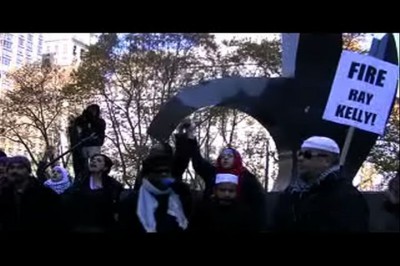 Muslim Americans teamed up with Occupy Wall Street protesters to march toward the New York Police headquarters Nov. 18 in a demonstration against NYPD and CIA tactics and repression of Muslim American communities.

They defended convicted terrorists as victims of entrapment and abusive treatment, including one convicted of trying to kill American troops and FBI agents in Afghanistan.

One speaker, an attorney, said she was "counting on the media to also help us investigate and expose the vicious Stasi-like tactics of the NYPD." The Stasi were East Germany's brutal secret police.

Another dismissed mosque leaders who work with law enforcement as "Uncle Toms."

The statements were in response to a series of media reports portraying the NYPD engaging in vast surveillance programs with the city's Muslim community, sending informants into mosques, using demographic profiling and other perceived abuses.

But the rally strayed far beyond such grievances, casting all law enforcement actions as invalid and somehow threatening. Dawud Walid, executive director of the Council on American-Islamic Relations (CAIR) Michigan chapter, told the crowd of about 200 that it was time to push back.

"We're not gonna sit with you for these bogus iftar dinners where you, say, have a little hummus and some dates with us and then you're sending these informants into our [mosques] and Arab and Muslim organizations. Enough is enough," Walid said. "And we need to start calling out, you know back in the old days the Uncle Toms were normally my color. These days we have Pakistani Uncle Toms, Arab Uncle Toms, we have Uncle Toms masquerading as imams, Indonesian and Malaysian Uncle Toms. And we need to call them out. And these people are trying to speak on behalf of the community, when they try to go off to the powers that be for these photo [opportunities] ... We as a community should rise up and say this Uncle Tom and Aunt Jemima does not represent the interests of the [mosques] and Arab organizations. Enough is enough."

Their chosen speakers included several advocates of conspiracy theories targeting Muslims. Among them:

· The lawyer, Lamis Deek, who tells Muslims the Mossad is roaming the streets of America and that the FBI will break the law to set them up.

· An imam, Talib El Hajj Abdur-Rashid, who takes Iranian President Mahmoud Ahmadinejad's side that the Holocaust is exaggerated, and who has a history of defending convicted terrorists.

· Mauri Salaakhan, a writer who thinks Zionists control Keith Ellison, the first Muslim elected to Congress, and that Israel is responsible for the U.S. invasion of Iraq.

· Walid, who thinks an imam who was killed after he fired first on approaching FBI agents, was a victim of excessive force.

Muslims convicted in American courts are victims, too, speakers told the crowd. Relatives of defendants in two homegrown terrorist plots involving FBI informants spoke of the injustice they believe was done to their loved ones.

"These mens (sic) are doing 25 right now for a case that was manufactured by our God damn Justice Department," said Alicia McWilliams, aunt of David Williams. He was among four men convicted of plotting to blow up a synagogue and target National Guard aircraft. "... And I say hell to Bloomberg. Commissioner Kelly – you knew this case was manufactured ... I say hell to the judges. When the government start losing its integrities (sic) and its morals and its ethics, we as a people have to stand up."

While the presiding trial judge was critical of the informant's behavior in the case, she upheld the convictions, finding the defendants had a predisposition "to commit violent terrorist acts against Jews and American government facilities" before the informant entered the picture. Williams, she wrote, "immediately and enthusiastically entered into planning the criminal venture."

Similarly, speaker Mauri Salaakhan called the case of Aafia Siddiqui "the heaviest on my heart of all the cases I've ever dealt with." Siddiqui, an MIT-educated neuroscientist, is serving an 86-year prison sentence for attempting to murder U.S. soldiers and law enforcement officials trying to interview her in Afghanistan in 2008.

Siddiqui blamed Israel for her conviction and demanded that all Jews be excluded from her jury. Her attorneys claim she had been tortured. At the rally, Salaakhan asserted she continues to be mistreated.

"And right now this Muslim woman, this sister of ours, is sitting on a military base in a prison hospital and they are trying to drive this woman into committing suicide or moving her toward a slow, agonizing death," he said. "We should not allow this to happen in silence. We must stand up and we must defend her."

Salaakhan has embraced wild conspiracy theories in the past.

In his book, The Palestinians' Holocaust: American Perspectives, he claimed that the "Jewish-Zionist lobby" in America is so pervasive it controls Keith Ellison, a Minnesota Democrat and the first Muslim elected to Congress. He also likened conditions in Gaza to Nazi concentration camps, and cast the Darfur genocide as an exaggeration pushed by Israel.

Attorney Lamis Deek, a member of CAIR-NY's board, kicked off the rally, predicting it would make history as the start of a campaign ending the marginalization of Muslims in America. "This is our first message to the state security apparatus that across the world is falling apart, and we demand that it behave properly here today," she said. "End the state security apparatus. Bring the money back to the people. Build our schools. That's what we're here to say."

She twice condemned the purported "Stasi-like" tactics of the New York police. Deek is known for invoking frightening images in advising audiences to fear law enforcement. FBI agents "will do anything, anything within their power and oftentimes beyond their power to get you to talk," Deek said during an April presentation. "They will threaten you. OK? I've had one case where they tried to blackmail my client, I mean blackmail, seriously blackmail; that's illegal. But they'll do it."

Deek also was actively involved in supporting Viva Palestina, a pro-Hamas aid convoy organized by former British MP George Galloway, through her role as a co-founder of Al-Awda Palestine Right to Return Coalition. During a July 2009 fundraiser in Brooklyn, Deek said the convoy's aim was political, not charitable.

Part of that goal was an attempt to legitimize Hamas, a terrorist group, as a legitimate representative of the Palestinian people. Her comments seemed to endorse the Hamas charter and its call for a Palestinian state replacing Israel. "In choosing Hamas, what they chose was one united Palestinian state on all of the 1948 territories from the north to the very south. That is what Palestinians chose. And in supporting Palestinian choice we are saying we support their right to liberation from violent colonialism."

Also speaking at the rally was Imam Talib El Hajj Abdur-Rashid, popularly known as Imam Talib, the president of the Islamic Leadership Council of New York. Like Walid, he tried to discredit Muslims who cooperate with law enforcement.

He, too, has a history of defending of convicted terrorists.

Long after Sami Al-Arian pleaded guilty to conspiring to provide goods or services the Palestinian Islamic Jihad, Talib described him as "someone who has committed no crime other than to have perhaps a political view that differs ... And in America even that is not supposed to be a crime."

Talib similarly defended Jami Abdullah Al-Amin, also known as H. Rap Brown, who was convicted of killing a police officer in Atlanta, Georgia in 2002. Talib is a member of the National Committee to Free Imam Jamil Abdullah Al-Amin.

Prosecutors argued that Al-Amin was part of a movement of African-American converts to Islam, who wanted a separate Sharia-governed state within the United States.

"The incarceration of Imam Jamil Abdullah Al-Amin is the latest stage in a pattern of harassment, frame-ups and setups of him by the U.S. government," Talib told the New Amsterdam News in 2001. "The pattern stretches over approximately 40 years and is designed to neutralize his effectiveness as a leader to negate the unique dimension of his contributions to the struggle of oppressed peoples and a Muslim freedom fighter born and raised in America."

In his remarks at the New York demonstration, Walid defended a follower of Al-Amin's, who died in 2009 after opening fire on FBI agents who came to arrest him on a criminal complaint. Luqman Abdullah preached violence and urged his followers not to surrender peacefully to police.

"I had a colleague of mine two years ago, a Muslim leader who was killed through one of these joint terrorism task forces, Imam Luqman Ameen Abdullah [who] was shot 21 times including shot in the back by the FBI along with a raid coordinated by the Dearborn and Detroit Police Department, it's personal for me," Walid said at the rally.

No one at the rally mentioned failed terrorist plots in New York City, including the attempted Times Square bombing or Najibullah Zazi's plot to bomb subway stations. Rather, they chose to castigate those Muslims who try to work with law enforcement, concocted arguments to excuse the convictions of would-be terrorists, and likened their situation to one of the most severe police states in history.

Dawud is a loon

This CAIR guy, Dawud Walid of CAIR is a closet terrorist supporter for sure. He continually goes around the state of Michigan preaching Islam but always confronts all other religions as "threatening". He is a pure whack-job loving Islamaphobe himself.