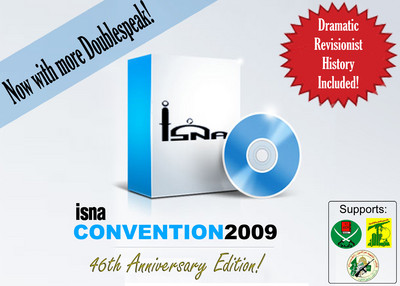 The Islamic Society of North America (ISNA) engages in frequent interfaith programs with Jewish groups and has been embraced warmly by the Obama administration as a contact point for the American Muslim community.

In those circles, ISNA presents an open and progressive face of Islam that is led by a woman, Ingrid Mattson.

Literature available at ISNA's annual convention last month in Washington, however, offers a far different vision. Books and pamphlets obtained by the Investigative Project on Terrorism from ISNA's July national convention feature numerous attempts to portray U.S. prosecution of terrorists and terror supporters as anti-Muslim bigotry; dramatic revisionist history that denied attacks by Arab nations and Palestinian terrorists against Israel; anti-Semitic tracts and hyperbolic rants about a genocide and holocaust of Palestinians.

Previously, the IPT exposed hate speech during a conference panel that featured a call for "more jihad" along with slurs against Jews and gays and a defense of the terrorist group Hizballah as an innocent player subject to incessant Israeli onslaught.

ISNA made no comment about pro-Hizballah comments by author Cathy Sultan, who said she could "see no reason why Hizballah should not remain armed." It feigned ignorance about invited speaker Warith Deen Umar's radicalism and bigotry, even though his book was available at the convention and is excerpted on Umar's own website.

ISNA's pre-convention vendor statement demanded that all literature at its bazaar "must be pre-approved in writing by ISNA, in ISNA's sole and absolute discretion. Book selling vendors must complete enclosed form providing inventory of the literature to be sold at ISNA." [Emphasis added]

Among the works that met approval from "ISNA's sole and absolute discretion" were:

In The Palestinians' Holocaust: American Perspectives, an introduction says the book "features a myriad of diverse voices, whose individual and collective observations will no doubt underscore why the plight of the Palestinian people must be seen as a genocide and present day holocaust!"

Picking up that theme, Professor Francis A Boyle describes his visit to the Dachau concentration camp. The town of Dachau was so close to the death camp, he writes, that it was impossible to believe residents didn't know about the mass murder taking place inside. Boyle had the same reaction as he traveled through the West Bank and Gaza in 1986 "in order to investigate Israel's atrocities and war crimes against the Palestinians." He claims that Israel and the United States "are striving to consummate a Middle East version of the Munich Pact that will sell out the right of the Palestinian people to self-determination."

In a later chapter, "The Zionist Footprint in Iraq, Somalia, and Sudan," Saalakhan blames Israel for the U.S. invasion of Iraq:

"How does Israel factor into the equation? It is a known fact that Israel has a strong presence in different parts of the continent – especially in the Horn of Africa. It is also a well known fact that Israel – like the Islamophobes at the highest levels of the U.S. government - desire nothing more than controlled chaos in the Muslim world. This was the first thought that came to this writer's mind when Ethiopia (and the U.S.) attacked Somalia in December 2006."

On page 221, in the chapter "Target Iran," Saalakhan writes of the pleasure in meeting Iranian President Mahmoud Ahmadinejad, but:

"The Zionists and their supporters have made him into a lightning rod for controversy since his public statements on the holocaust and the State of Israel."

Saalakhan even called out U.S. Rep. Keith Ellison, who works closely with ISNA and the Council on American-Islamic Relations (CAIR), an organization so rooted in Hamas-support that the FBI has cut off communication with it. Of Ellison, Saalakhan writes:

"He is has a fairly progressive legislative history, however, on the Arab-Israeli conflict he has not shown himself to be much different from other American politicians; which is to say, the Jewish-Zionist lobby has its inordinate influence within his office as well. (We pray that this will soon change.)"

When American law enforcement and federal prosecutors go after alleged terrorists and their financiers, that's due to Israeli influence, too, according to Saalakhan. In a chapter called "Israel's Reach Into America's Judiciary: The Holy Land Foundation Trial," Saalakhan writes that the 2001 Treasury Department order effectively shutting down the Holy Land Foundation for Relief and Development (HLF) for Hamas support came with ulterior motives:

"Solely because the humanitarian relief that this organization had consistently brought to the needy people of Occupied Palestine was construed as 'funding terrorism' against the state of Israel."

A flyer from the Muslim Legal Fund of America similarly cast HLF as an innocent supplier of humanitarian aid to needy Palestinians and condemned the HLF conviction, demanding "this un-American & Unjust Verdict [that] must be appealed."

In fact, the defendants were charged with violating American law prohibiting support for terrorist groups, including Hamas. Evidence from the trial showed the men supported Hamas' activities and were part of a broader effort to support Hamas with "media, money, men and all of that." Other evidence shows the defendants knew that the Palestinian charities where HLF routed more than $12 million were controlled by Hamas.

The Palestinians' Holocaust was one of several books and pamphlets at the ISNA conference espousing conspiracy theories that portrayed the defendants as victims of a government out to get Muslims.

An essay by Laila Al-Arian, daughter of Palestinian Islamic Jihad board member Sami Al-Arian, was distributed which lamented the "chilling effect" the HLF verdict would have on the Muslim community:

"With its propaganda-like quality, the evidence was clearly intended to provoke an emotional response. For example, jurors were repeatedly shown videos of grisly suicide bombings that none of the defendants were in any way connected to, or accused of planning."

Jurors did see the bloody aftermath of Hamas attacks. But they also saw repeated examples of the defendants praising such violence, and even acting it out.

Similarly, a flyer from the "Fort Dix 5 Support Committee" argued the five men convicted of conspiring to attack Fort Dix and kill soldiers were victims of government entrapment. The men were convicted, the flyer said, because "the tactics and strategies of the prosecution in these cases have stretched legal concepts beyond the point where a fair trial is possible."

The defendants were arrested as they met with the informant to buy M-16 and AK-47 rifles to use in their planned attack.

Similarly, accused Al Qaeda terrorist Aafia Siddiqui is also portrayed as a victim of the U.S. government's abuse of Muslims. For example, literature from the Muslim Legal Fund of America ("MLFA") distributed at the conference sought donations for Siddiqui's defense fund. Siddiqui is charged with plotting to kill American soldiers and federal agents in Afghanistan and has been found competent for trial. 9/11 mastermind Khalid Sheikh Mohammed allegedly told interrogators that Siddiqui was an Al-Qaeda accomplice and facilitator. The Office of the Director of National Intelligence asserts that Siddiqui was also tied to Pakistan Al-Qaeda operative 'Ammar al-Baluchi. He gave her orders to travel to the U.S. to help facilitate other Al-Qaeda operatives entry into the U.S. in order to carry out terror operations and married her shortly thereafter in 2002.

The MLFA claimed that she was a "Victim of the 'Global War on Terror'" and alleged that she had been abused in custody.

Likewise, the Muslim Public Affairs Council (MPAC) distributed copies at the conference of its new 19-page booklet, "Seeking an Elusive Peace: Keys for Successfully Advancing Middle East Peace." MPAC does not describe suicide bombing as acts of terrorism but as a military tactic, and accuses Israel of deliberate ethnic cleansing. Palestinian violence against Israel and criticism of that violence was akin to criticizing Native American attacks on white settlers, the booklet argues:

"Palestinian use of violence cannot be understood without reference to this basic historical fact. The conventional American view is analogous to criticism of Native American assaults on White settlers, while ignoring their underlying dispossession."

That, along with Salaakhan's book, is among the attempts to cast the Palestinians as victims of a holocaust or genocide. The Nazi Holocaust sought to eliminate European Jewry and succeeded in killing 6 million Jews. The Armenian genocide left 1.5 million Armenians dead among a population of 2.5 million people.

The ongoing Darfur conflict has had an estimated toll of 400,000 deaths from direct bloodshed, disease and starvation and the displacement of 2.5 million people. That, too, Saalakhan writes, is Israel's fault:

"It is a known fact that Israel has a strong presence in different parts of the continent – especially in the Horn of Africa. It is also a well known fact that Israel – like the Islamophobes at the highest levels of the U.S. government - desire nothing more than controlled chaos in the Muslim world. This was the first thought that came to this writer's mind when Ethiopia (and the U.S.) attacked Somalia in December 2006."

Despite all this conspiratorial, anti-U.S. dogma, the State Department's www.america.gov web portal continues to function as a veritable PR machine for ISNA, publishing monographs and posting articles like this, this, this and this, in which ISNA officials are treated as if they represented a mainstream organization analogous to the Anti-Defamation League, the U.S. Catholic Conference or the NAACP.

Ahmed Mohamed's August 20 story on the same State Department site is the latest example. It promotes "Journey into America," a film which premiered July 4 at the Islamic Film Festival at ISNA's convention. (President Obama praised the book and DVD as a "wonderful gift.")

In a panel discussion which followed the film, ISNA President Ingrid Mattson said "Journey into America" was "refreshing" and would dispel irrational fear that many Americans have about radical Islamists organizing at mosques: "There are many Americans who are really frightened of what might be going on behind the doors of the mosques. So to get in and to hear what is in those people's minds, it takes away the strangeness of it."

The true measure of character is determined by what is said and written when people think no one is paying attention. The literature promoted at last month's convention shows we may not really be seeing what goes on behind closed doors with ISNA.