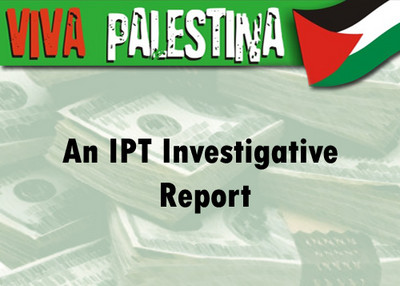 In the U.S. and England, organizers are laying the groundwork for a convoy of relief aid destined for Gaza. It would be the third such venture by a group calling itself Viva Palestina.

"I, personally, am about to break the sanctions on the elected government of Palestine. By Allah, we carried a lot of cash here. You thought we were all fat. We are not fat. This is money that we have around our waists ... We are giving you now 100 vehicles and all of the contents. And we make no apology for what I am about to say: We are giving them to the elected government of Palestine; to the Prime Minister Ismail Haniyeh."

Galloway was a little more circumspect on the second trip to Gaza in July. There was no public ceremony showing the donations. A group of Viva Palestina convoy participants did meet with Haniyeh, however, who praised them "as heroes; you are opening the eyes of the world to the siege in the Strip."

The Investigative Project on Terrorism has found ample evidence that Viva Palestina's ultimate objective is political – with the elevation of Hamas at its core. How can we be so sure?

Viva Palestina officials repeatedly said so. During that March event with Hamas officials, Galloway held up the bag of cash and said:

That sentiment was echoed on the eve of the sendoff of the Viva Palestina USA convoy which left in July. During a rally in Brooklyn, speaker Lamis Deek told the crowd:

"It's not about charity... but in every way that we cut it, it is political."

"[I]n choosing Hamas, what they chose was one united Palestinian state on all of the 1948 territories from the north to the very south. That is what Palestinians chose. And in supporting Palestinian choice we are saying we support their right to liberation from violent colonialism."

England's Charity Commission has an open investigation into Viva Palestina, reporting that officials with the group have not responded to requests for information.

Canadian officials refused to allow Galloway into the country last spring, citing an immigration law barring foreign nationals who support terrorism. A spokesman labeled Galloway as "infandous," or particularly odious, and someone "who actually brags about giving 'financial support' to Hamas, a terrorist organisation banned in Canada." That decision was upheld by a Canadian judge.

Wednesday, the Jerusalem Post reported that the University of California-Irvine was investigating whether the school's Muslim Students Union helped raise money for Hamas by organizing an event with Galloway in May.

Galloway has denied being a Hamas supporter, despite his direct donation to Hamas in Haniyeh's name that was captured on video last spring. He claims to be loyal to the late Fatah leader Yasser Arafat. But he stands against Arafat in endorsing Hamas, which has been engaged in a bloody power struggle with Fatah since 2007, when Hamas took control of Gaza by force.

A representative of the National Lawyers Guild advised travelers what to do if questioned about their trip:

"And if there is anything in your mind that seems to suggest that there's a trick or something about that, don't answer it. Don't answer."

After the convoy returned, supporters gathered July 27 to discuss their experiences at Brooklyn's Salam Arabic Lutheran Church. Archbishop Atallah Hanna of the Greek Orthodox Patriarchate of Jerusalem expressed a desire in sync with Hamas' ultimate goal:

Life in Gaza must be desperate for its residents. But the fastest way to improve those conditions is not to entrench an Islamist government espousing doctrinaire opposition to a peaceful settlement to its conflict with Israel. The more Hamas believes it can withstand diplomatic and military pressures, the longer this cycle will endure.

Faceless should call himself brainless. The fact that Hamas was elected goes to show the fallacy behind elections always being the source for what is right. Read the Hamas charter. Stalin and Hitler and Saddam Hussein always won their "democratic" elections as did Arafat. If the Germans elected Hitler then attacked America would we be bad for fightng back agaisnt the "democratically elected government of the German people"? The Hamas Charter says it all, the Arabs elected an anti-Semitic, fascist, totalitarian government of cutthroats that deserve no support from the West. "Beneath contempt" is what someone like Faceless is when it comes to stopping Arab fascis. Hamas is al Qaeda and must be stopped.

1. true democracy don't do coup d'etat like Hamas did in Gaza

2. true democracy don't throw people from roof because they are of another party (Fatah, in this case)

4. true democracy don't use women nor children like human shields

8. true democracy are not engaged in a war to wipe another country and people of map

9. your idea about true democracy is wrong

Hamas was the lesser evil of two thugs to the Palestinian voters, not a legitimate election

Some democratic election, faceless, as the Arab voters had only a choice between two terror groups and Fatah was deemed more corrupt. Hamas then murdered the Fatah politicians, throwing them off buildings or shooting them in the head. You call that democracy in action, you fool? So you think supporting Hamas supports democracy? What of their charter advocating the annihilation of the world's Jews? And your position isn't arrogant? As for suffering people in Gaza, that, too, is the fault of Hamas for firing missiles into Israeli communities and using the Gaza population as human shields. I find your crocodile tears about this noxious "charity" far more contemptible than anything else. www.StoptheISM.com .

You can't handle the truth. The people of Gaza were not given an "election" choice. It was Hamas or death. Much in the same way the people live today in Gaza. If you cross Hamas, you die.

You know it's true.

Viva Palestina supports Hamas, and Hamas IS identified worldwide as a terrorist organization in every sense of the term.

That is why the Charities Commission IS currently investgating VP but VP won't respond to them.

Because VP are stinking of support for Hamas.

What kind of turd would attack the messenger?

A "faceless" one, no doubt.

Viva Palestina is a registered charity in the UK under the control of the Charities Commission. If there are any irregularities that you are aware of, please feel free to inform them. eanwhile people are suffering and you are happy to see that continue. You are beneath contempt and I'd have called you exactly what you are, but you've set your filters to block honest expression.

Rest assured though - you are a massive one.