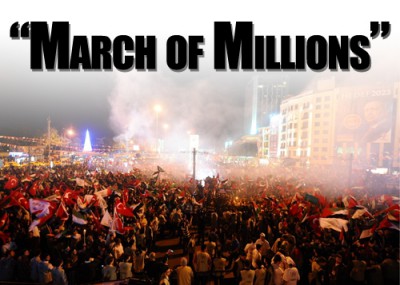 Turkish organizers of a flotilla aimed at breaking Israel's embargo on Gaza vow to carry on despite growing international pressure to back off.

United Nations chief Ban Ki-moon last week "called on all governments concerned to use their influence to discourage such flotilla, which carry the potential to escalate into violent conflict." On Wednesday, U.S. State Department Spokesman Mark C. Toner said during a White House press briefing, "We have made clear through the past year that groups and individuals who seek to break Israel's maritime blockade of Gaza are taking irresponsible and provocative actions...."

France and Canada have warned their citizens against participating. Last year's flotilla ended violently as passengers on the ship Mavi Marmara attacked Israeli commandos with clubs, knives and other weapons. The soldiers opened fire in self defense, killing nine people.

But IHH, the Hamas-tied Turkish organization behind last year's confrontation, is pressing forward despite the warnings. Freedom Flotilla II is expected to sail toward Gaza in late June working with 22 other international organizations to send 15 ships across the Mediterranean. Approximately 1,500 people from more than 100 countries are expected to participate.

Israel imposed a sea blockade on Gaza in 2007 to prevent Hamas from receiving materials that can be used in terrorist attacks. But Egypt opened its Rafah crossing with Gaza last weekend, freeing the flow of goods into the Palestinian territory and rendering the need for a flotilla bearing aid moot.

A U.S. State Department official told a Senate subcommittee hearing last month that "We've been very clear with them [the Turkish government] that a new flotilla will in no way be helpful." In mid-May, a bipartisan group of 36 members of Congress wrote a letter to Turkish Prime Minister Recep Tayyip Erdogan expressing "serious concern" over reports of the next flotilla, and requesting that the Prime Minister "help discourage these efforts and work with the Israeli government in a productive way as it continues to allow legitimate aid, but not weapons, to enter Gaza."

Those calls were dismissed.

"We are not supposed to give an answer because Turkey is not the recipient of this letter," a Turkish Foreign Ministry spokesman said, adding that the flotilla is a civil-society initiative with participation from across the world, and not an issue of the Turkish government. Turkish Foreign Minister Ahmet Davutoglu stated on numerous occasions that the government cannot and will not control the actions of the Turkish NGO. "The expectation of Turkey to do something Western countries can't do is a reflection of the opinion that Turkey limits democratic freedom. We will take the necessary measures we had taken last year, but the main source of the issue is Israel's blockade," Davutoglu said in May on a Turkish news channel.

IHH head Bulent Yildirim, who prepared a group of approximately 40 IHH operatives in advance to clash with the Israeli commandos, addressed Israel and the United States during a speech at a rally on Monday:

"We are now coming with our second flotilla. We are not alone," he said. "We are coming with our nine martyrs this time. A year ago 600 people applied to join us and after our blood was shed in the waters of the Mediterranean this number has gone over 500,000."

On Monday, IHH hosted a press conference about the upcoming flotilla on the Mavi Marmara, now docked in Turkey. Later on, a ceremony to commemorate the anniversary of last year's violent clash attracted tens of thousands of people in Istanbul's Taksim Square.

Muhammad Zeidan, head of the Higher Arab Monitoring Committee and a passenger on the Mavi Marmara last year, thanked the people of Turkey during the press conference and said the blood of Mavi Marmara martyrs was not shed in vain.  Attendees of the press conference included Sheik Raed Salah, the head of the Northern Branch of the Islamic Movement in Israel, former Hamas leader Mohammed Sawalha, Viva Palestina leader Kevin Ovenden, Ann Wright from the U.S. BOAT TO GAZA initiative, and other representatives from Italy, Bosnia, Ireland, Spain, Jordan, Iran and Pakistan.

When asked about the possibility of another Israeli attack, IHH Deputy Head Hüseyin Oruç responded, "We should not forget that these are Palestinian waters. It belongs to Palestinians. No third party has a right to control those territories. This is unlawful."

Late Monday night during the commemoration ceremony, participants carrying Palestinian, Turkish and IHH flags chanted slogans such as "Wait Palestine, Mavi Marmara is coming," and "Revenge, revenge." Some protestors raised Hamas and Hezbollah flags, and carried coffins and posters such as "Palestine's resistance will win."

Representatives from countries participating in the flotilla spoke, including two from the United States. "If the Israeli killers thought they could scare us to go away they were wrong. We are coming back. We are coming stronger," said Matthias Gardel, a member of the Swedish flotilla delegation. "Free Palestine."

Sheik Raed Salah, who was on the Mavi Marmara last May and plans to sail on it again in June, gave a fiery speech to the crowd in Arabic [translation here]:

Salah and his group are monitored closely by the Shin Bet, the Israeli Security Agency. Throughout the 1990s, charities run by the Northern Branch of the Islamic Movement were shut down by Israel for transferring funds to Hamas in the West Bank, and Salah was jailed in connection with it. He is periodically arrested for inciting violence. The Islamic Movement has been described by senior Israeli terrorism expert Ely Karmon as "a faction of the regional Muslim Brotherhood organization."

A widow of one of the nine killed last year called flotilla passengers "the pride of Palestine and this ummah and the heroes of Mavi Marmara. You are the fear of Israel, its annihilation." On Tuesday, Hamas unveiled a monument to commemorate last year's dead. Hamas Prime Minister Ismail Haniyeh inaugurated the Freedom Flotilla Martyrs' Memorial at Gaza City's harbor. "The Freedom Flotilla exposed the unjust nature of the siege. A siege that reflects hegemony and oppression," Haniyeh said. Haniyeh denounced UN Secretary General's call to prevent the flotilla from sailing to Gaza and thanked Turkish leaders. He added that flotilla organizers must "press ahead and not hesitate, for the sake of their brothers in Gaza."

Video evidence indicates that IHH had no interest in delivering humanitarian aid to Gazans last May, but instead desired martyrdom. In an interview last June with Al Jazeera TV, Hüseyin Oruç said, "The passengers aboard the ship were all prepared for this outcome. They all wanted to become martyrs. They were prepared. Our goal was to reach Gaza or die without achieving that."

Flotilla organizers have tried to downplay IHH's role in Freedom Flotilla II. Yet Monday's ceremony, IHH's defiance and extreme rhetoric, and the continued support the group receives from Hamas, indicate the group is determined to initiate another violent encounter with Israel.

2. Israel allows more rights to Muslim Arabs than any other Arab nation in the world. If they wanted peace, they could just set down their guns for a couple of weeks, and negotiate with Netanyahu on peaceful, not harmful terms. Israel would be glad to accept a peaceful Palestinian state, but that cannot be done with a group like Hamas. "[Peace] initiatives, the so-called peaceful solutions, and the international conferences to resolve the Palestinian problem, are all contrary to the beliefs of the Islamic Resistance Movement. For renouncing any part of Palestine means renouncing part of the religion"- the Hamas Charter. This shows the reason why Israel has had so much trouble making peace with the Palestinians; the Palestinian government Hamas does not believe in Peace with Israel, because they believe it is against their religion.

3. Jews are indigenous to Israel too. In the past 3400 years, there have been 3 Jewish States of Israel. In fact, BEFORE the creation of the modern State of Israel (in 1948), there were Arab riots in the 1800's, 1920's, and 1930's where ancient Jewish towns were targeted by groups such as "The Black Hand" (led by Izz ad Din al Qassam). Jews living in the area for centuries were systematically murdered by this group and other Arabic mobs that were formed.

4. Realize why so many Jews came to Israel in the first place. Jews left the Arabic countries because they were persecuted, beaten, had religious taxes, and were murdered. Around 600000 Jews migrated from Europe to Israel because of the anti-semitism and the Holocaust.

5. The Jews in 1948 offered the Arabs to have peace and to live together, but the Arabs rejected this notion and instead attacked the new Jewish State, causing the 1949 war.

Peace be upon those who have the Hudah

You are completely wrong on that JRD Kidd, the "Arabs" will never give in to Israel, let alone negotiate with them. Israel isn't a legitimate body, it's occupied ISLAMIC LAND (waqf) no "Arab" would allow it, let alone any Muslim.

The Messenger Muhammad (saw) said: "Two religions shall not co-exist in al-Jazeerat al-Arabi." That was before he killed the Jews of Khyber.

"Indeed, they want to eradicate the light of Allah with their mouths, but Allah will perfect his light over them, although they dislike it. Indeed it is He, who sent his Apostle with the Guidance and the ideology of Truth to make it superior over all other ideology, although the people hate it." (9:32-33)

Rasullullah (saw) said: "Islam is superior and nothing can supercede it."

Peace unto those with Hudah.

The inevitable war that will reduce the entire region to rubble.

Unless the Israeli government start to embrace pragmatism and to accept that sooner or later five million indigenous Arabs will reclaim their lands by force, regardless of the nuclear, biological and chemicals weapons stockpile in Israel's arsenal - then the future is bleak indeed. Every month that passes with the refusal of Netanyahu to negotiate, the nearer is the inevitable war that will reduce the entire region to rubble.