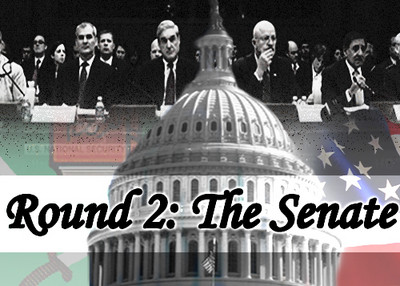 The Muslim Brotherhood is more of an organization with extremist members than an extremist organization, America's top two intelligence officials told a Senate committee Wednesday.

Director of National Intelligence James Clapper emphasized the heterogeneous nature of the Brotherhood, saying its ideology and approach varies from country to country and describing a generational gap between old-line conservatives and younger members more willing to participate in secular political systems.

"This is not a monolithic organization," CIA Director Leon Panetta told the Senate Intelligence Committee. It has lawyers and professionals among its ranks, so while "it is clear that within the Muslim Brotherhood there are extremist elements," it's difficult to label the organization as a whole.

Minutes earlier, Clapper acknowledged that the Brotherhood "probably is supportive" of weapons smuggling to Hamas terrorists in Gaza. He could not say what the Muslim Brotherhood would do regarding Egypt's 32-year-old peace treaty with Israel.

Clapper used part of his opening remarks to clarify comments he made about the Brotherhood before a House committee hearing last week. In response to a question at that hearing, he called the Brotherhood "a very heterogeneous group, largely secular, which has eschewed violence."

Clapper's comments triggered disbelief among many in Washington last week, with Rep. Sue Myrick, R-N.C., saying the administration either didn't know much about the Brotherhood "or they are apologizing for them, which is inappropriate for those in charge of protecting the American people. Let's be clear – the Muslim Brotherhood is NOT secular."

Clapper acknowledged using a "less than precise turn of phrase," and said the Brotherhood is not secular, but in Egypt works within a largely secular political system. Its support, he said, is based on grass roots outreach and social services such as health clinics. It "likely will be a part of the political process in Egypt," he said.

A Brotherhood representative is on an eight-member committee charged with recommending changes to Egypt's suspended constitution by the end of next week. The existing constitution bars religious groups from forming political parties, but the Brotherhood's presence on the committee, along with its stated intention to form a party to run candidates for parliament, indicate that limitation is not likely to endure.

As we reported last week, Article 2 of the Brotherhood's bylaws call for it "to establish Allah's law in the land by achieving the spiritual goals of Islam and the true religion." That includes "the need to work on establishing the Islamic State, which seeks to effectively implement the provisions of Islam and its teachings."

General Guide Muhammad Badi emphasized that point in a sermon given last September, saying the Quran should be the law of Egypt and that Muslims are duty-bound to bring that about.

The Brotherhood's motto remains "Allah is our objective. The Prophet is our leader. The Qur'an is our law. Jihad is our way. Dying in the way of Allah is our highest hope." It continues to desire the spread of Islamic law within Egypt and around the world.

While Brotherhood officials have issued a series of statements in recent weeks, claiming to welcome a democratic government to replace Mubarak, former Council on Foreign Relations President Leslie Gelb said the group's true ambitions are unclear at best. "It would be delusory to take the Muslim Brotherhood's democratic protestations at face value," Gelb said.

Sen. Dianne Feinstein, a California Democrat and the committee chairwoman, alluded to reports that downplayed the Brotherhood's influence, an estimated 30 percent among Egyptians. In politics, she noted, 30 percent is a significant foundation, especially in a society with few other organized parties.

"Egypt," she said, "is the key country in the Middle East. I worry about that."

On other issues, Panetta and National Counterterrorism Center Director Michael Leiter expressed frustration with Pakistani intelligence. Feinstein commented that the Inter-Services Intelligence (ISI) agency "walks both sides of the street," helping the United States at times, but refusing to hand a key suspect in the 2008 Mumbai terrorist attacks to India and hesitating to send forces to fight the Taliban in Northern Waziristan.

"They look at issues related to their national interest and take steps that complicate the relationship" with the United States, Panetta said. He acknowledged spending significant time discussing "how they operate, the ties they have to certain groups" with his Pakistani counterparts.

Pakistan's cooperation has helped keep al-Qaida at its weakest point since 9/11, Leiter said. But resistance in other areas, including Pakistan's relationship with the terrorist group Lashkar-e-Tayyiba, are a frustration. Though it has not done so yet, Lashkar has the ability to wage terrorist attacks in the United States and Europe.

"What they did in India can be done elsewhere," Leiter said.

But another major Lashkar attack in India would hurt U.S. national security and dramatically increase tensions between the South Asian nations, he said.

Senators also asked about Iran's nuclear program. In his prepared remarks, Clapper said the Islamic republic is "keeping open the option to develop nuclear weapons in part by developing various nuclear capabilities that better position it to produce such weapons, should it choose to do so. We do not know, however, if Iran will eventually decide to build nuclear weapons."

Sen. Dan Coats, R-Ind., asked why there was doubt about Iran's intentions, but Clapper said he could not answer that in an open hearing. Economic sanctions imposed by the United States and other countries are being felt by the Iranian government and the people, Clapper said.

But that has yet to persuade the Iranian government to back off its nuclear weapons program.

And while a new wave of anti-government protests hit Iran this week, Clapper noted that executions there are at record levels, which could stunt the movement's growth. Other crackdowns like arrests of dissident leaders and cutting off Internet access similarly could slow the anti-regime movement.

I have to ask how much credibility this assessment has after a statement like the Brotherhood is secular and whether making that gaffe influenced what was said in this statement.

I watched parts of this hearing and it amazes me that Feinstein can be asking these questions. Is she not an elected official who should have been doing some homework on this issue over the YEARS since 9-11? Asking the Clapper to confirm for her what she can easily find out makes her look even more foolish than he sounds.

You have been telling people for years to read the documents like the ones the Brotherhood produces and publishes and determine if what they say qualifies them as an extreme organization or an organization with extremists. You conveniently put these documents all in one place for ease of reading.

If these men and women who are our elected officials, who are sworn to uphold the Constitution of the United States, are misleading us on these issues purposely, is that not insurgency? And if they are not purposely misleading us, aren't they too stupid be be heads of our national security and part of our govenment. Oh, I just see the stupidity of that last remark.

We are 9+ years since 911. When will Feinstein find time to learn for herself? Didn't the documents seized in Annandale VA in 2004 prove that the Brotherhood is Hamas? Where has Clapper been?