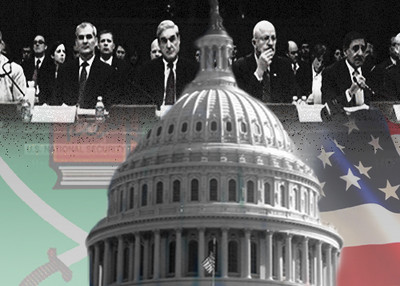 Elements of the Muslim Brotherhood, the Islamist group whose ideology has inspired terrorists such as Osama bin Laden, are in the United States and have supported terrorism here and overseas, FBI Director Robert Mueller told a House committee Thursday.

Mueller joined seven other Obama administration intelligence and law enforcement officials at a hearing of the House Permanent Select Committee on Intelligence. They spoke of the Brotherhood's U.S. ties as word spread in Egypt that President Hosni Mubarak was prepared to resign. Mubarak has repeatedly said his administration, in place since 1981, is the one thing keeping an Islamic state led by the Brotherhood from taking over Egypt.

While Mueller, Director of National Intelligence James Clapper and other witnesses spelled out a variety of threats, they and some committee members highlighted the Brotherhood's ties in the United States. It was a significant departure from earlier hearings, which focused on groups more directly involved with terrorism.

"I'm concerned that the Muslim Brotherhood is using peaceful protests in Egypt for a power grab, and our government doesn't seem to grasp their threat," Rep. Sue Myrick, R-N.C., told the committee and the witnesses. "The Muslim Brotherhood isn't a danger because they are terrorists, but because they push an extremist ideology that causes others to commit acts of terrorism."

Clapper agreed that "there are entities associated with the Muslim Brotherhood here in the United States." Mueller told Myrick that he would provide the committee with greater detail on the Brotherhood's activities in closed session.

However, Clapper also characterized the Brotherhood in Egypt as a mostly secular umbrella organization. "The term 'Muslim Brotherhood'...is an umbrella term for a variety of movements, in the case of Egypt, a very heterogeneous group, largely secular, which has eschewed violence and has decried Al Qaeda as a perversion of Islam," Clapper said in response to a question from Myrick. "They have pursued social ends, a betterment of the political order in Egypt, et cetera.....In other countries, there are also chapters or franchises of the Muslim Brotherhood, but there is no overarching agenda, particularly in pursuit of violence, at least internationally."

Clapper's "secular" reference is odd, given the Brotherhood's motto is "Allah is our objective. The Prophet is our leader. The Qur'an is our law. Jihad is our way. Dying in the way of Allah is our highest hope."

In a statement issued after the hearing, Myrick expressed astonishment at Clapper's assessment. ""Either the Administration doesn't know who the Muslim Brotherhood is, which shows incompetence," she said, "or they are apologizing for them, which is inappropriate for those in charge of protecting the American people. Let's be clear – the Muslim Brotherhood is NOT secular."

During the hearing, Myrick said she was also concerned about the Brotherhood's attitudes toward government. "The danger of the Muslim Brotherhood is not just encouraging terrorism through their ideology, but also trying to take over government, so everyone has to succumb and live under their ideology," Myrick said.

The scope of the Brotherhood's vision for the United States was spelled out in a 1991 document called the "Explanatory Memorandum." In that memo, which federal prosecutors introduced as evidence in two trials of the now-defunct Holy Land Foundation for Relief and Development, Brotherhood leaders said they planned to create an Islamic state in the United States.

In that document, the Brotherhood's stated goal was "a kind of grand Jihad in eliminating and destroying the Western civilization from within and "sabotaging" its miserable house by their hands and the hands of the believers so that it is eliminated and God's religion is made victorious over all other religions."

The memo also listed 29 organizations working in the United States to further the Brotherhood's goals. They include the Islamic Society of North America (ISNA), the Muslim Students Association (MSA), the North American Islamic Trust (NAIT) and the Islamic Association of Palestine (IAP). The IAP and the Holy Land Foundation shared many members and directors, including those who founded the Council on American-Islamic Relations (CAIR).

Clapper told the committee the U.S. government has no relationship with the Muslim Brotherhood in America. However, In response to a question from Rep. Peter King, R-N.Y., Mueller said "we do not have a relationship with CAIR," although some FBI officials have attended the same events as CAIR representatives. The FBI suspended formal ties with CAIR in 2009, citing CAIR's ties with Hamas, the Middle Eastern terrorist group that controls the government in Gaza, and the ties of some CAIR leaders with Hamas front groups.

Much of the evidence tying CAIR to Hamas, another offshoot of the Muslim Brotherhood, was presented during the two trials of the Holy Land Foundation. Five HLF officials were convicted in 2008 of illegally sending millions of dollars to Hamas.

Much of the hearing testimony focused on the threat still posed by al-Qaida, the Islamist terrorist group responsible for the 9/11 attacks. Anwar al-Awlaki, the U.S.-born cleric who now leads al-Qaida unit based in Yemen, al-Qaida in the Arabian Peninsula (AQAP), has become perhaps the greatest threat, Clapper said.

While AQAP has primarily focused on attacks in Yemen and Saudi Arabia, Clapper said, "it is increasingly devoted to directing and inspiring attacks on the U.S. Homeland and other targets in the West, as well as Western interests in Yemen."

Obama supported the Muslim brotherhood & a big number of American & European are agree.

Campus Crusade for the Muslim Brotherhood

What ever idiot said that the MB is as welcome as the Campus Crusade for Christ is a moron. Please know that their is no equivalent in the Christian, Buddhist, Shinto, Hindu or other religions of the world. None of them (at least not since the inquisition) wants to impose its view on you, die trying or better yet, kill you trying.

On the spectrum of coercion, they are on a new chart. You would never invite the Aryan Nation on Campus. So, why would you invite an event better funded, better organized, more populous and more zealous group into your home?

O'bama's partner for US Islam

Clapper is paving the way to dupe US into supporting the violent Islamists to advance their ideology. O'bama in his early presidency said that the US is not a Christian country. Why did he say that? Because he hates America and its history. No doubt about it. This is his main intention all along to make the US an Arab-Muslim state and to erase its history that Christians founded this country.

Good for them. I fail to see anywhere in the Constitution that states it is a Christian country. If the Muslim Brotherhood wants to bring their cultural jihad, as opposed to a physical, violent jihad(try looking up the difference between the greater jihad of the mind and the lesser jihad of the body sometime) then they are just as welcome to as the Campus CRUSADE for Christ!

Clapper is an imbecile of the highest caliber - How can an organization based on the tenets of Islam be secular? This man is truly incompetent to say the least!

Abbott & Costello In CHarge of US Intelligence Gathering?

"We've met the enemy, and he is us". Now we kow why the US is being infiltrated by the Muslim Brotherhood! Our great protectors on the front lines deending us from all enemies foreign and domestic, don't even know who they are! Are we so surpirsied? James Clapper didn't even know about the 12 Britons arrested for ploting terrorist activities in London. How can this man be allowed to remain at his post after the deer in the headlights stare he gave to Dianne Sawyer on ABC? What a joke? And guess what the rest of the world is thinking aobut the sorry, weakended state of the US with this man at the helm? Can a better case be made for the need for accountability? Who is overseeing the overseers? Good grief Charlie Brown, I won't move the football again, I promise. Now that we know who has let our gurad down, what can we do about it? The alarm is ringing, but is anybody waking up? Thank You for looking out for our best interest. What a bunch of dopes. Liberals have nearly destroyed this great country, and the multiculti's are leading us down to the nearly unthinkable - a secular state led by the Muslim Brotherhood. Oh those darned secularists! PUH-LEASE!