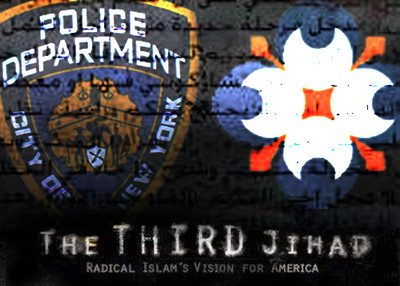 The Council on American-Islamic Relations' protest that the documentary The Third Jihad smears Muslims reveals more about CAIR's desire to hide its record than any concern for the civil rights of Muslim Americans.

Unfortunately, however, that was enough for the New York Police Department to cave in to CAIR's demands and stop using the film in training programs for police officers. Now, New York's finest will have to look harder for evidence that the group claiming to look out for civil rights is actually working to stymie law enforcement efforts to stop terrorism.

Narrated by M. Zuhdi Jasser, a Muslim who challenges groups such as CAIR, The Third Jihad details how CAIR was created shortly after a secret 1993 meeting in Philadelphia involving members of the Muslim Brotherhood's Palestine Committee. Their goal was to lead opposition to the 1993 Oslo accords and generate support for Hamas, the terrorist organization that now runs the government in Gaza.

Records of that October 1993 conference, which was tapped by federal law enforcement officials, detail how CAIR's founders Nihad Awad and Omar Ahmad were present as the group discussed the need to create a pro-Hamas advocacy group that would not be tied publicly to Hamas.

Shukri Abu-Baker, then the president of the Holy Land Foundation for Relief and Development, a Hamas financial support arm, explained the idea. "We will form an organization for you to show the Americans that you are … [unintelligible]," he said. "It will be made up of some of our people, our beloved ones, and let's not hoist a large Islamic flag and let's not be barbaric-talking. We will remain a front so that if the thing happens, we will benefit from the new happenings instead of having all of our organizations classified and exposed."

In testimony, FBI case agent Lara Burns said CAIR was created after the Philadelphia meeting and pointed to an exhibit which shows CAIR listed on a Palestine Committee agenda within weeks of its 1994 creation.

The FBI cited that evidence in explaining why it cut off formal communication with the group. "Until we can resolve whether there continues to be a connection between CAIR or its executives and HAMAS," FBI Assistant Director Richard C. Powers wrote in April 2009, "the FBI does not view CAIR as an appropriate liaison partner."

The Third Jihad also shows CAIR officials refusing to denounce Hamas or Hizballah as terrorist organizations and cites an internal Muslim Brotherhood document submitted in the federal trial of the Holy Land Foundation for Relief and Development that shows how the Brotherhood wants to create a global Islamic state.

But CAIR refused to deal with the documentary's substance. Instead, it called it "notorious" and then devoted the rest of its press release to the same guilt-by-association tactics it accuses its opponents of using. It quoted CAIR-NY official Zead Ramadan comparing the documentary to the Nazi-era file Triumph of the Will and the silent movie Birth of a Nation, which romanticized the Ku Klux Klan. Ramadan also voiced his concerns to NY Police Commissioner Ray Kelly at a local Eid celebration. According to Ramadan, Kelly seemed concerned and said he would "take care of it."

Deputy Commissioner Paul Browne also took CAIR's side in the argument. "It was reviewed and found to be inappropriate," he said of the movie. "It was not approved for the curriculum. It's not shown for any purpose now."

Released in 2008, The Third Jihad's only flaw concerning CAIR is that it doesn't have enough information about the self-styled civil rights group. For example:

It's not the first time the NYPD has met CAIR's self-interested demands. In 2007, CAIR heavily criticized an NYPD report entitled "Radicalization in the West: The Homegrown Threat." Then-CAIR Chairman Parvez Ahmed said the report casted "a pall of suspicion over the entire American Muslim community" and labeled "almost every American Muslim as a potential terrorist."

Perhaps what CAIR really objected to was the report's analysis of the radicalization of former CAIR communications specialist Randall Todd Royer. A former U.S. Army soldier, Royer, as part of a 2004 plea agreement on weapons charges, admitted in a statement of facts to assisting others in "gaining entry to a jihad camp run by the Lashkar-e-Taiba in Pakistan," a U.S. designated terrorist organization. In 2004, Royer testified in the case of Virginia cell leader Ali Al-Timimi, in which he admitted to encouraging others to seek training from LeT during a secret meeting held only days after 9/11. Royer's terror-linked actions overlapped with his time served with CAIR, from 1997, to at least the beginning of October 2001.

In 2009, the NYPD amended the report to include a statement of clarification which called the New York Muslim community its "ally" and added "that the NYPD's focus on al-Qaida inspired terrorism should not be mistaken for any implicit or explicit justification for racial, religious or ethnic profiling" and that it should "not be read to characterize Muslims as intrinsically dangerous or intrinsically linked to terrorism." That wasn't good enough for CAIR. In a joint statement, the organization remained concerned that the report still contained "harmful stereotypes."

CAIR officials, it seems, have never seen a documentary, article or planned congressional investigation of radical Islam they consider "unbiased." Nor, it seems, have they found any law enforcement investigation of radical Islam worthy of their support. All of which makes it quite troubling that the leaders of the police department in the city most victimized by radical Muslim terrorists would roll over so easily.

Now that Dr. Ben Carson has been bold enough to speak the truth to a totally ignorant population of Americans there's no doubt the controversial questioner at the recent Trump gathering was a 'plant.'

The good Doctor, and Trump also, have been trashed by Liberal Media for being so prejudiced against that wonderful 'peaceful religion' Islam. Trump's response to the accusation from the man in the crowd was lame yet his reply was enough to send the liberal media into 'gotcha heaven!' Trump offered no rebuttal to the unidentified man that flatly stated, 'Obama is a Muslim.' I suspect Trump was waiting for a question about his hair, or perhaps Jeb Bush's wife's Pedigree?

It is Dr. Ben Carson that has stepped up to the plate answering directly that he would not be supportive of a Muslim President. As always, liberal media, and now even some conservative media have determined Carson is unfit to be President and are bent on driving him out of the race for President. That is a most telling clue revealing just how truly stupid the people are that we depend on for the latest news. Dr. Carson is undoubtedly far more qualified to tell the truth about The Muslim Movement than all the over paid zealots we call Anchors and Reporters combined.

Think about it, what person(s) running for office or delivering the six o'clock news has more International Travel and Cultural Education that Dr. Ben Carson? There aren't any, even former Secretaries of State. Carson scares the media, he talks about God and his Mom deserving all the credit for his success. He talks about, and backs with facts, how Liberal Policies have destroyed opportunity for Blacks going back to The Johnson Administration. He is obviously a serious threat to those Liberal Elitists that are afraid they might lose power over their enslaved voting block. They fear blacks might begin to understand the common sense offered to them by an honest black candidate, a black candidate that talks about real hope and real change.

On Monday, we were given a remarkable clue that is likely behind the planted question. CAIR, The Council of American Islamic Relations has demanded Dr. Carson withdraw from the race for President. This the greatest endorsement Dr. Carson could ever get. This group is but one of hundreds of Muslim activist groups under the Big Umbrella of The Muslim Brotherhood. CAIR was dubbed a Terror Group by The F.B.I. years ago when they were exposed in a lengthy trial in Dallas Texas.

I'm often chastised for long letters, but serious issues most often are not covered in sound bites or a couple of paragraphs. Just ask Dr. Ben Carson. The majority of Americans generally are totally unaware that Freedom itself is on a fast track to extinction.

RE: AMERICANS ARE BEING MISLEAD

The very fact that CAIR (the Muslim Brotherhood in America) is emboldened enough to interfere with a US election should concern Republicans and Democrats alike. These enemies of the West should not even be operating within the USA. Lets be real - 8 years of a liberal administration has eroded our national security to a dangerous degree.

PC, NYPD and The Third Jihad

This article is a prime example of why the King Hearings are necessary and long over due !

When will America and her elected officials pull their heads out of the sand? CAIR is bullying our officials who are all afraid of not being re-elected. They are selling our country down the river and will scream when we are attacked again that no one did anything to stop it. CAIR should be listed as a supported of terrorism and outlawed in America. WAKE UP!!! before it's too late.