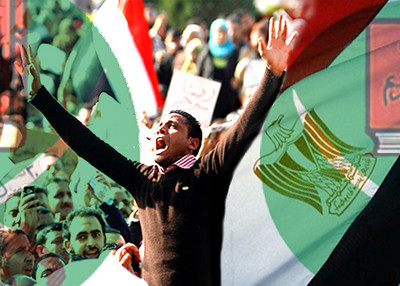 The protests against Egyptian President Hosni Mubarak show little sign of relenting. The dismissal of the previous government, and swearing in of new ministers Monday did little to assuage those demanding Mubarak's ouster. There are calls for 1 million people to take to the streets of Cairo Tuesday. One report says demonstrators are giving the army until Friday to choose sides between the government and the people before protesters march on the presidential palace.

Meanwhile, former International Atomic Energy Agency chief Mohammed El-Baradei may be making progress in his campaign to become the consensus candidate to lead a future Egyptian government. The Muslim Brotherhood has been content to lurk in the background throughout the weeklong uprising against Mubarak's government.

It has supported the protests and helped organize local vigilante efforts against looting and vandalism. And it has endorsed El-Baradei's campaign, creating concern over how much power and influence the Brotherhood might enjoy under an emerging Egyptian government.

Divergent views of what that means for the Egyptian people, the United States and its allies have emerged in recent days. Former CIA officer Bruce Riedel, now a senior fellow at the Brookings Institution's Saban Center, wrote that Brotherhood power might be troublesome but is not a cause for anxiety. Likewise, analyst Peter Bergen told CNN that the Brotherhood "could well play a quite constructive role."

Both men argue that the Brotherhood is a relatively moderate movement in a sea of Islamic radicalism. The group has renounced violence, both say, and are far from subscribing to the blood-lust ideology driving al-Qaida.

That view glosses over the Brotherhood's core fundamentalist attitude that could subject women and Egypt's religious minorities to second-class status, threaten the 30-year peace between Egypt and Israel, and benefit terrorist groups including Hizballah and Hamas, a group created by the Brotherhood to carry out terrorist violence against Israel.

This belief was made clear in August during a sermon by Brotherhood General Guide Mohammed Badie. "The Zionists, the West and the lackey rulers conspired together. If the Muslim Brotherhood had remained in the field, the Zionist Entity would not have stood nor its flag raised," he said.

Brotherhood power in Egypt "would be calamitous for U.S. security," counters Council on Foreign Relations President Emeritus Leslie Gelb. "What's more, their current defenders don't really argue that point, as much as they seem to dismiss it as not important or something we can live with. The MB supports Hamas and other terrorist groups, makes friendly noises to Iranian dictators and torturers, would be uncertain landlords of the critical Suez Canal, and opposes the Egyptian-Israeli agreement of 1979, widely regarded as the foundation of peace in the Mideast. Above all, the MB would endanger counterterrorism efforts in the region and worldwide. That is a very big deal."

To the Brotherhood, violence is justifiable when it agrees with the cause. "They cry to us: freedom is not granted from an occupying usurper, not is it implored at negotiations tables," the group's leader said in a March sermon. "Throughout history an occupying usurper will only depart through resistance. The people will only obtain their freedom through Jihad. The history of freedom is not written in ink but in blood."

What has the Brotherhood said about its vision of governance?

In 2007, when it was under the control of more reform-minded leaders, the Brotherhood called for a "Supreme Ulama Council" – a group of religious scholars – which would vet government decisions to ensure they are consistent with Islamic law.

The following year, MB Secretary-General (now its deputy leader) Mahmoud Ezzat gave an interview in which he explained that "in Islam there is no difference between politics and religion ... I personally feel astonished when I hear that reform can be achieved without resorting to Islamic principles."

Women and religious minorities, including Coptic Christians, would be prohibited from holding positions of power. And the group's opposition to violence has its limits. Israeli intelligence sources say the Brotherhood has been funneling money and facilitating the covert flow weapons to Hamas in Gaza. One of its most influential theologians, Yusuf al-Qaradawi, has repeatedly sanctioned suicide bombings by Palestinians and by Iraqis fighting American soldiers.

He has called the Holocaust a punishment of Jews for their corruption and expressed his dying wish to kill an Israeli and be killed by an infidel in order to achieve martyr status. Qaradawi is no fringe voice within the movement. He has repeatedly been offered the post of Brotherhood spiritual guide.

And his views on suicide bombings were echoed in a July sermon from Badie, the general guide. "Jihad and resisting the occupier are not terrorism," Badie said, "and martyrdom seeking operations are not suicide."

Meanwhile, there's little to indicate that the Brotherhood's vision is representative of those taking to the streets throughout Egypt.

For regular Egyptians, the spontaneous revolution was remarkable in how fast it spread throughout the country despite the termination of the internet and cell phones. They trained their anger on the reviled President and his henchmen, the internal police who had long been the Mubarak's shock troops in suppressing free speech and carrying out physical abuse and even torture. As the violence of the weekend wore off, the military was out in force befriending the protesters as well as in trying to tamp down the violence. In contrast to other revolutions, the military in Egypt was not hated or reviled by the people.

Rather it was a respected institution that was not involved in the suppression of rights or in the incarceration of citizens. Observers also say that the Egyptian military also was not widely infiltrated by the Muslim Brotherhood except at lower ranks, the type of lower ranks that permitted Muslim Brotherhood to infiltrate the military in 1981 and assassinate President Anwar Sadat.

It is the Egyptian military that is the real power behind the throne. And if it decides that Mubarak has to go, then Mubarak will be gone.

When the time comes for free elections, the question is going to be raised whether the MB should be allowed to participate.

The Obama Administration seems open to the Brotherhood, inviting its officials to his June 2009 speech in Cairo.

The administration's emphasis on allowing true democracy to emerge in Egypt, one of the key demands of the protesters, is totally understandable. But one need only look at the unmitigated disaster under the Bush Administration when it pushed the Palestinians to hold free elections in Gaza. Hamas won big and parlayed that into a coup d'état in Gaza where the terrorist group rules today.

It is not in America's best interests to allow a new Egyptian regime to be controlled, or significantly influenced, by the Muslim Brotherhood. That scenario would destabilize the entire Middle East, possibly creating a domino reaction that would see the government of Jordan and other Muslim allies of the U.S. fall.

Therefore, the United States should encourage the establishment of a stable, civil society in Egypt before any elections. If that is not possible in Egypt, then the United States needs to make it clear that its annual economic and military aid – in excess of $1 billion – will be cut off from any Egyptian government seeking to renounce peace treaties and impose the Brotherhood's theocratic ambitions on the Egyptian people.

Why would anyone think that Egypt, the country that produced the 9-11 terrorists, not go radical once Mubarek is out of office? Wouldn't you expect that the Islamic extremists would fill the vacuum once Mubarek is out? And if that is a real possibility, why is President Obama pushing for his ouster? And why are all the media also in favor of his ouster? There is no difference in the commentary between Fox, MSNBC, CNN, and the networks. How did this revolt happen so quickly? How did the violent uprising that started today get organized overnight ? Who is really behind this revolution in Egypt?

the brotherhood to lead?

The Muslim Brotherhood have never done anything constructive. They have only been destructive.

Egypt needs grain... where are they going to get it??

Why are the nations that have GRAIN not as appreciated as those who have oil?

Why are we not drilling our own resources? on and off our own shores??

The world with the muslim brotherhood in charge in the middle east will decend quickly into a new dark ages... Obama has set us up with debt to the Chinese,, with food shortages began with the draught in California... Obama is part and parcel of this global islamic caliphate..

He and Odinga pushed sharia on Kenya.. the 2 of them are ganging up to remove the Christian president of the Ivory Coast.. Obama's miscreant trouble making ACORN and code pink affiliates are in the middle east riling people up for revolution... their people are in the US screaming for the same.. revolution to what?????

when those who revolted in the middle east see that the miscreants have no positive plans, the same as the libs in America are seeing Obama has.. NO POSITIVE PLANS... will WW III be hand to hand, machete to machete fighting, like the crusades?