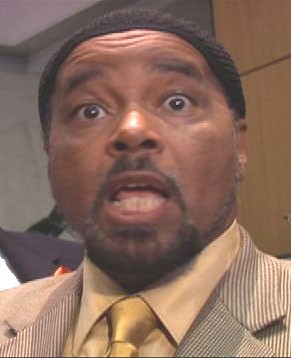 Mahdi Bray is at the center of a firestorm on Staten Island. In response, he is falsely accusing the Investigative Project on Terrorism both of fueling it and of misrepresenting a videotape showing him enthusiastically responding to a call for Hamas and Hizballah supporters.

At issue is the proposed sale of a convent to the Muslim American Society (MAS), a group founded by Muslim Brotherhood members in the United States. MAS hopes to turn the building into a mosque. Bray directs the group's political arm, MAS Freedom.

Opponents of the sale have zeroed in on MAS' ties to the Brotherhood and Bray's videotaped gesture supporting Hamas and Hizballah during a 2000 rally outside the White House. The Brotherhood tie is significant because it has designs on restoring a global Caliphate and because it gave birth to Hamas during the 1980s.

It's the IPT's fault, Bray said, calling Executive Director Steven Emerson an "Islamophobe." The IPT, he wrote on his own web blog, "work[s] hard to create religious and ethnic division between people in America. As one case in point, Emerson has flooded the internet with my prior arrest record, even down to my arrest mug shot. In addition, he continues to circulate a ten year old video clip (taken out of context) that seems to give the impression that I, and other persons who attended at a rally in Washington D.C., support Hamas and Hezbollah and thus, we are terrorists."

"For the record, he wrote, "neither I, nor my organization, have ever supported terrorism, or groups associated with terrorism."

If only his deeds matched his words.

As our dossier on MAS shows, Bray was a character witness for convicted terror supporter Sami Al-Arian, and continues to stand by him after evidence showed Al-Arian was on the governing board of the Palestinian Islamic Jihad.

Similarly, Bray defended the Holy Land Foundation for Relief and Development, and continues to do so even after a jury in Dallas found the charity and five former officials guilty of illegally routing more than $12 million to Hamas.

He criticized the conviction of Ali al-Timimi for soliciting followers to wage war against the United States after 9/11.

He supports people with documented ties to terrorism, but insists he is not a terrorist supporter. "The citations by the Investigative Project are not based in fact," he told the Staten Island Advance. But he didn't cite any specific error or inaccuracy.

When pressed to do the same during Wednesday's hearing, a MAS official reportedly failed to do so and said that would come later. The dossier first was published in September 2007, giving Bray and his colleagues more than two years to scour it for mistakes. In February 2009, an investigation into Bray's criminal background exposed his two felony convictions, including one for a fraud in which he kept disability payments sent to his deceased grandfather.

Bray claims that, too, is a misrepresentation.

But it's the videotape that seems to be doing the most damage. Bray calls it "that silly, taken-out-of-context- video clip of the rally in question." The event, he wrote, "was a peaceful rally that called for a US foreign policy vis-a-vis the people of Palestine that was fair and balanced and that rejected violence. The chant for the support of Hezbollah and Hamas was a facetious response to Emerson's mis-characterization of the rally organizers as 'terrorists' or terrorist sympathizers. Why won't Emerson show the rest of the tape?"

Here is Alamoudi's entire speech, with the previous speaker leading up to him to show the full context. Previously, Bray tried to dismiss the controversy by casting Alamoudi's call-out as a joke:

"You saw me pumping my fists. You didn't see me raising my hands. If they had shown the audience, you would have seen people in the audience raising their hands and falling out laughing. For him to come and make these kinds of radical rants, no one took him seriously."

Alamoudi looks pretty serious on the tape. Moments after the Hamas/Hizballah call, he casts Hamas as a proper entity:

"Consummate with this internationally recognized principle we consider HAMAS in occupied Palestine and Hezbollah in Lebanon to be legitimate political liberation organization as opposed to western media's consistent depiction of them as terrorist organizations."

Despite all this, Bray says his emphatic gesture in response to Alamoudi is somehow out of context. Writing about the IPT, he said the information is part of an "attempt to create fear and hysteria by means of a well orchestrated- smear campaign that incites fear by linking, lawful Muslim organizations with international terrorism."

Other MAS leaders have similar videotape issues. Then-MAS President Esam Omeish was forced to resign from a Virginia state immigration panel in 2008 after IPT video surfaced of him giving a speech – just months after Bray appeared with Alamoudi – in which he praised Palestinians for learning "the jihad way is the way to liberate your land." He added, "We are telling them that we are with you and we are supporting you and we will do everything that we can, Insh'Allah, to help your cause."

In the Staten Island case, the IPT had no role in opposing the Staten Island land deal and learned about it only when Bray accused us of misrepresenting his record. The reporting on his record, on his support of people tied to terrorist organizations and on his actions during the 2000 rally all are well documented and accurate.

Bray's attempts to divert attention and blame the messenger are transparent.

As a Staten Islander, I've been educating myself about the parties in this issue. Of course I already know a bit about my fellow New Yorkers in the Midland Beach neighborhood where the Muslim American Society seeks to buy a church and convert it into an MAS mosque and facility. But until a few days ago, I didn't know anything about the MAS.

While I experienced 9/11 close at hand, like so many New Yorkers, and while I knew that radical Islamism was about, not just in the Middle East or in Europe, but here, too, I was nonetheless shocked to learn that what I consider to be jihadists were trying to move in so close to where I call home.

Another key lesson for me is that most of my friends and neighbors have no idea of who the MAS is, of what the varied and textured (if you will) expressions of radical Islamism look like, such that, through their still-overly-rose-colored-lenses, the local skirmish does not form an integral part of the overall war, such that, to them, there is one local battle between phobic locals and "different" others who may be "radical" in the conventional sense, but are, first and foremost, adherents of the Muslim faith; and another "political net" battle, between the "Islamophobe thinktanks" and some ultra-radical Muslim activists, none of whom are really hereabouts.

That is, they don't get it. Or, it's the Islamism, stupid.

-- a needed object lesson, I suppose.

We have been addressing the challenges of the ideology and politics of MAS for years. Some have counter-protested at MAS political rallies. There have been successful legal efforts demonstrating MAS' ties to the Muslim Brotherhood, and many of the public have been educated on this issue. As usual, the IPT clearly and coherently documents the facts on MAS.

I am concerned that those pursuing this new direction is a trap for those concerned about jihadist ideologies, that will show those against anti-freedom political views as just as intolerant as those who are for such views. Moreover, I can imagine how such news videos of angry American crowds at hearings about a mosque will play to other Muslim audiences and overseas audiences.

Instead of YouTubes of Mahdi Bray, others will have YouTubes of Americans protesting mosques to keep posting over and over.

In one week, we have seen two protests against mosques in New York. Where is this direction going to take us? It may be convenient for many of us to not comment and not to ask such questions, but we really need to have such discussions and consider the impact on the bigger picture.

The old standby for indefensible statements, it was taken out of context!! I love it!

Talk about disingenuous. I've seen the incident in question about fifty times. How is it even possible to take that out of context?

This kind of nonsense certainly fools the elected buffoons, but it's not fooling the majority of the people!!