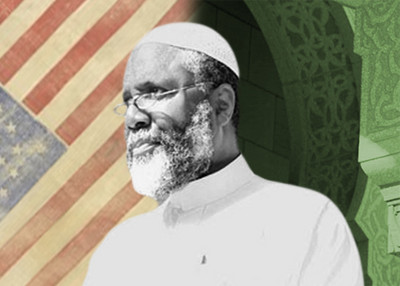 Imam Johari Abdul-Malik of Dar al-Hijrah mosque gives the opening prayer before the Virginia House of Delegates this afternoon. The effort is part of House of Delegates' desire to reach out to religious leaders of other faiths. However, selecting Johari Abdul-Malik, the mosque's outreach director, or any religious leader from Dar al-Hijrah, is questionable due to their support for radical and political Islamic issues.

Abdul-Malik issued a statement acknowledging criticism of his invitation. In it, he dismissed critics as "voices of intolerance and divisions" that are undermining the interfaith effort of delegates Kaye Kory and Adam Ebbins:

"We therefore should not allow voices of division and hate to go unchallenged. We differ on some [of] our basic beliefs and practices but we hold in common our commitment and love of God, a God of mercy and compassion."

The record of Abdul-Malik's statements suggests that his beliefs are more nuanced than he presents here. At a 2001 conference hosted by the Islamic Association of Palestine, a now defunct propaganda branch of the Specially Designated Terrorist organization Hamas, he called for attacks against Israeli infrastructure to show Muslim displeasure with Israel's treatment of Palestinians:

"I am gonna teach you now. You can blow up bridges, but you cannot kill people who are innocent on their way to work. You can blow up power supplies… the water supply, you can do all forms of sabotage and let the world know that we are doing it like this because they have a respect for the lives of innocent people."

This is not his first statement that was devoid of tolerance and compassion. Abdul-Malik has predicted a Muslim majority in America, as he did in a November 2004 Friday Khutba, or sermon:

"Alhamdullilah [Praise to Allah] and we will live, will see the day when Islam, by the grace of Allah, will become the dominant way of life… I'm telling you don't take it for granted because Allah is increasing this din [religion] in your lifetime. Alhamdullilah [Praise to Allah] that soon, soon… before Allah closes our eyes for the last time, you will see Islam move from being the second largest religion in America – that's where we are now – to being the first religion in America."

In addition, Abdul-Malik has openly expressed support for some very radical individuals.

His defense of convicted terror facilitator Ali Al-Timimi, an extremist cleric who stated "mujahideen killed while fighting Americans in Afghanistan would die as martyrs," is a prime example. According to court documents, Timimi recommended that his followers "obtain jihad training from Lashkar-e-Taiba because its belief system was good and it focused on combat." Abdul-Malik told the Times Union, on July 16 2005, that Timimi's conviction was "like being convicted of murder, even though you haven't killed anyone." He also told the New York Times about his concern that the conviction would "chill free speech." As the newspaper reported:

"There is a view many Muslims have when they come to America that you could not be arrested for something you say," said Imam Johari Abdul Malik, outreach director at Dar Al Hijrah Islamic Center in Falls Church. "But now they have discovered they are not free to speak their minds. And if our opinions are out of vogue in the current climate, we feel we are all at risk."

Just last month, the mosque hosted a fundraiser for Sabri Benkahla, who is serving a 10-year prison sentence for obstruction of justice and perjury for statements he made before a Virginia grand jury investigating the "Virginia jihad" terror cell inspired by Timimi.

Abdul-Malik is on record about the moderation of Anwar al-Awlaki, a previous spiritual leader at Dar al-Hijrah who went on to become an al-Qaeda affiliated radical fighting America from Yemen. Abdul-Malik falsely claimed that Awlaki was not extremist during his time at Dar al-Hijrah, when he stated:

"Let's be clear when Anwar Al Awlaki was at Dar Al-Hijrah, he was articulating the same message that I articulate today in Dar Al-Hijrah, a very open, a very engaging, a very community wise and contemporary understanding of the faith within the framework of its traditionalism."

However, while he was a prayer leader at Dar al-Hijrah, Awlaki declared that Palestinians who killed Israeli civilians were freedom fighters, claimed that the 9/11 terrorists were actually "victims not hijackers," and accused the FBI of pinning the blame on Muslims for the 9/11 attacks.

Abdul-Malik is not the only leader of his mosque to have defended violence or known terrorists. Several of Dar al-Hijrah's leaders have themselves been connected to, or convicted for, providing financial and logistical support to terrorist organizations. A former member of Dar al-Hijrah's Board of Trustees, Abdulhaleem al-Ashqar, brought together Hamas members and their U.S. contacts at a 1993 meeting in Philadelphia designed to discuss ways to thwart U.S.-led Middle East peace efforts. Ashqar also directed the Al Aqsa Educational Fund, a Hamas-linked group. Likewise, Ismail Elbarasse, a Dar Al-Hijrah founder, worked for Hamas leader Mousa Abu Marzook and wired $735,000 to Hamas operative Mohammad Salah.

Mohammed Adam El-Sheikh, Dar Al-Hijrah's imam from August 2003-May 2005, was the Baltimore regional director of the Islamic American Relief Agency (IARA), a U.S. designated terrorist organization. Mohammed Al-Hanooti, Dar Al-Hijrah's imam from 1995-1999, was the former director of the Islamic Association for Palestine, which, as mentioned earlier, was an American front for Hamas.

"Jihad is an obligation from Allah on every Muslim and cannot be ignored nor evaded. Allah has ascribed great importance to jihad and has made the reward of the martyrs and the fighters in His way a splendid one. Only those who have acted similarly and who have modeled themselves upon the martyrs in their performance of jihad can join them in this reward."

Moreover, in 2004, El-Sayed told the Chicago Tribune that Al-Banna's ideas are "the closest reflection of how Islam should be in this life."

Johari's statements and Dar al-Hijrah's extremist past run contrary to the spirit of cooperation which the mosque attempts to express today. There's nothing wrong with seeking leaders of many faiths to address the delegates. There certainly are better candidates.