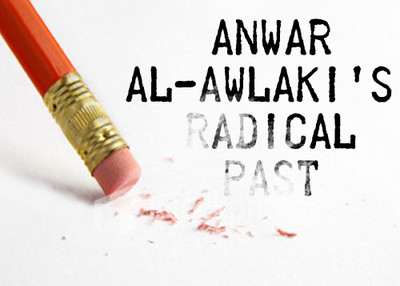 When a former imam from his mosque praised Fort Hood shooter Nidal Malik Hasan as a "hero," Dar al-Hijrah outreach director Imam Johari Abdul Malik took to the airwaves to criticize the remarks and cast them as surprising:

"Let's be clear when Anwar Al Awlaki was at Dar Al-Hijrah, he was articulating the same message that I articulate today in Dar Al-Hijrah, a very open, a very engaging, a very community wise and contemporary understanding of the faith within the framework of its traditionalism."

But a look at Awlaki's statements and connections during his time at the northern Virginia mosque shows that, at best, Malik's characterization was misinformed as to the facts. While at Dar Al-Hijrah, a mosque with a history of leadership tied to terrorists, Awlaki made statements that endorsed terrorism and defended the 9/11 hijackers.

Awlaki participated as a scholar in a forum of the popular Islamist and Yusuf al-Qaradawi-linked website, Islamonline.net, the week after the 9/11 attacks. In it, he tacitly endorsed terror against Israeli civilians and denied that any Muslim extremists were a threat to Americans:

That's an odd claim, since it had been more than three years since Osama bin Laden issued a fatwa saying that "to kill the Americans and their allies -- civilians and military -- is an individual duty for every Muslim who can do it in any country in which it is possible to do it."

In the same Islamonline chat, Awlaki also expressed doubt that Muslims were behind the 9/11 attacks:

"The evidence coming out is perplexing. You have a right to be confused. It appears that these people were victims rather than hijackers. It seems that the FBI went into the roster of the airplanes and whoever has a Muslim or Arab name became the hijacker by default." [Emphasis added]

Furthermore, in a Washington Post forum in November 2001, Awlaki defended the Taliban movement and accused America of rushing into war in Afghanistan. At the time, the Taliban had been openly supporting Al Qaeda. Al-Awlaki argued:

"The Taliban repeatedly said: show us the evidence and we will turn over whoever is guilty with the crime. The US should have given them the benefit of the doubt."

Johari Abdul Malik, who has taken the lead in defending Dar Al-Hijrah and Awlaki, has his own record of radical statements. At a 2001 conference hosted by the Islamic Association of Palestine, a component of a U.S.-based network of Hamas-supporters, Malik called for attacks against Israeli infrastructure to show Muslim displeasure with Israel's treatment of Palestinians:

"I am gonna teach you now. You can blow up bridges, but you cannot kill people who are innocent on their way to work. You can blow up power supplies… the water supply, you can do all forms of sabotage and let the world know that we are doing it like this because they have a respect for the lives of innocent people."

Malik has called for Islamic supremacy in America, as he did in a November 2004 Friday Khutba, or sermon:

"Alhamdullilah [Praise to Allah] and we will live, will see the day when Islam, by the grace of Allah, will become the dominant way of life… I'm telling you don't take it for granted because Allah is increasing this din [religion] in your lifetime. Alhamdullilah [Praise to Allah] that soon, soon… before Allah closes our eyes for the last time, you will see Islam move from being the second largest religion in America – that's where we are now – to being the first religion in America."

"I made a statement that we do support the Palestinian resistance...The so-called Israeli settlers are not civilian population. They are military reserves, they are armed, trained and dangerous. They invade the Palestinian neighborhoods at night and squander everything. They kill, maim, and destroy homes. If I were there, I would use every power in my hand to defend my family."

"So long as occupation continues, we say to the Palestinian people, go ahead. Continue your fight against occupation no matter what name they give you because we give you the name of courageous people who stand for the rights and we're standing with you."

Yet another example of Elsayed's radicalism can be viewed here.

More than simple pro-terrorist rhetoric, elements of Dar Al-Hijrah's leadership and membership have provided financial and logistical support to terrorist organizations. Records from the successful prosecution of the Holy Land Foundation for Relief and Development show that Abdulhaleem Al-Ashqar, a former member of Dar Al-Hijrah's Board of Trustees convicted of contempt and obstruction of justice, organized a 1993 meeting of Hamas members and sympathizers in Philadelphia. He was also the director of the Hamas-linked Al Aqsa Educational Fund. Likewise, Ismail Elbarasse, a founder of Dar Al-Hijrah, worked for Hamas leader Mousa Abu Marzook and wired $735,000 to Hamas operative Mohammad Salah.

Likewise, additional imams who preceeded and followed Al-Awlaki at Dar Al-Hijrah have been linked to terrorist fundraising groups and extremism.

Mohammed Al-Hanooti, Dar Al-Hijrah's imam from 1995-1999, was the former director of the Islamic Association for Palestine. In 1995, federal prosecutors in New York named Al-Hanooti as a potential unindicted co-conspirator in the 1993 World Trade Center bombing. While Hanooti had been an imam at the Islamic Center of Jersey City, the FBI considered him to be "a big supporter of Hamas," and the Albany Times Union reported in June 2002 that he regularly hosted events featuring terrorist mastermind Omar Abdel Rahman.

Mohammed Adam El-Sheikh, the imam of Dar Al-Hijrah from August 2003-May 2005, was the former regional director of the Islamic American Relief Agency (IARA) in Baltimore. In October 2004, the U.S. Treasury Department designated the worldwide network of IARA, along with five of its senior officials, as Specially Designated Terrorist Groups. The government declared: "Information available to the U.S. indicates that international offices of IARA provided direct financial support for UBL [Osama Bin Laden]." IARA also supported the terrorist groups Hamas and Al-Ittihad Al-Islamiya (AIAI). El-Sheikh was also an active member of the Muslim Brotherhood in his native Sudan from 1973-1977.

All of these facts contradict Malik's assertion that Anwar Al Awlaki was a moderate during his time at Dar Al-Hijrah, or that the mosque is free from violent rhetoric that leads to radicalism. If connections to 9/11 hijackers, praise for Hamas and ties to terrorist support mechanisms are considered moderate, it's fair to ask what Malik considers to be extreme. .

Detailed report. Thank you for your service to our country!

We need to let others know exactly what is happening in muslim communities and their practices, specially of TAQIYYA, RABAT (NYC mosque) and agreements and treaties entered in the 'SPIRIT OF HUDAIBIA'.

Wanting to be fair and tolerant, we are exposing ourselves to true diabolic practices, not unlike the MAFIA, and NAZISM. The sad part is that we haven't realized it yet. But with your help, we will, I pray that it will not be too late.

I recently heard and ex-muslim say the islam must CHANGE or be CRUSHED. As things are now, and from what I learn and hear every day, CRUSHED sounds good to me!