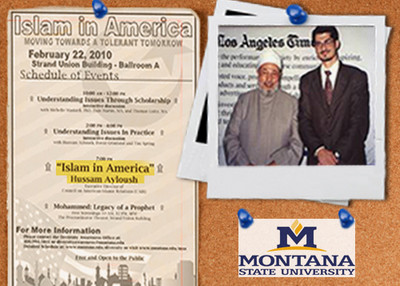 Take a Los Angeles-based director of a national Islamist organization and put him before about 50 people on a Montana university campus, and you'd hopefully get an enlightening and candid talk about his faith, his organization and the struggle against radicals.

Instead, Hussam Ayloush, Executive Director for the Council on American-Islamic Relations (CAIR) Los Angeles chapter, brought the heavy spin during two sessions on the topic of "Islam in America" last week at Montana State University.

The daylong conference, hosted by the Muslim Student Association and the University's Diversity Awareness Office, was designed to provide an overview of the basic principles of Islam. Rather than discuss the tenets of the faith, or point out where the vast majority of Muslims reject the interpretations of extremists, Ayloush's presentation misstated several key facts about the Islamic community's genuine struggle with terror.

While speaking on Muslims' views of terrorism, Ayloush claimed:

"The reality is, I don't know, I cannot think of one Muslim scholar that I know of, that I have ever heard of, who has actually condoned terrorism. I can come up with a list of actually every head of Islamic department, Islamic religious authority, in every Muslim country in the world that has actually strongly condemned unequivocally 9/11 attacks, the terrorism attacks, the beheadings that we watched in Iraq. There is no debate actually within the Muslim world. There is no scholar that says otherwise."

This is misleading at best. It ignores statements made by the prominent Muslim Brotherhood theologian, Yusuf al-Qaradawi, who has endorsed suicide bombings, including condoning the killing of American troops in Iraq. Leading Shiite scholar and Iranian supreme leader, Ayatollah Ali Khameini, and Sheikh Muhammad Sayyed Tantawi, the top Egyptian cleric of Al­ Azhar University, have both issued calls of support for "martyrdom operations."

In April of 2001 Qaradawi also told the Qatari newspaper Al Raya suicide bombings "are not suicide operations." Instead, he said:

"these are heroic martyrdom operations, and the heroes who carry them out don't embark on this action out of hopelessness and despair but are driven by an overwhelming desire to cast terror and fear into the hearts of the oppressors."

Qaradawi reaffirmed his support for suicide bombings just weeks ago on BBC Arabic saying that he "supported martyrdom operations" and that Palestinians are "forced to turn themselves into human bombs, in order to defend their land, their honor, and their homeland."

Ayloush can't plead ignorance here. He cited Qaradawi's views on zakat [alms giving] during a 2002 CAIR Fundraiser and even appeared with the Muslim leader side-by-side in a photo on CAIR-California's webpage in 2001.

The California CAIR representative also ignored endorsements of terrorism from other high-level Islamic scholars, such as Sheikh Faysal Mawlawi, who in a 2003 post on an Islam Online forum, wrote that "we are allowed to kill every Israeli until they stop this mass killing and paganism. It is only then that we can stop our attacks on the Israeli civilians…" [emphasis added]

Curiously, Ayloush chose not to address allegations surrounding his own organization, CAIR, for supporting the terrorist organization Hamas, a suspicion which now appears to be the focus of a federal grand jury investigation.

He misled his Montana State audience a second time when he described Al Qaeda's popular support:

"Al Qaeda does not exist openly in any Muslim country. They have to hide in some caves in Afghanistan because there is no country that will take them. Because they cannot operate. They are not popular. What people confuse is there is popularity in the grievances they take up."

It may be true that Al Qaeda does not operate "openly," a reality that has as much to do with the long reach of American Predator strikes as anything else. Ayloush's statement, however, minimized surprisingly deep support and power in some countries.

In Somalia, the Islamist terror group al-Shabaab recently pledged allegiance to Al Qaeda. Al-Shabaab controls wide plots of land in the southern part of Somalia. In Yemen and Pakistan, militants and civilians who remain sympathetic to the al Qaeda ambitions provide shelter for the group.

A 2007 Pew study of Muslim-American attitudes found that 7 percent of U.S. Muslims between the ages of 18-29 said that they have a "favorable" view of al Qaeda. Among the relatively large, young American Muslim population, that translates to tens of thousands of American youth who have some sympathy to Al Qaeda. The title of the survey's finding here is "Young Muslims: More Observant, More Radical."

After five college students disappeared in December and turned up in Pakistan hoping to join the jihad against American troops, Ayloush's bosses at CAIR national announced a recognition that they need to acknowledge and confront radicalism in their own community and "deal with it effectively." Pretending it doesn't exist, or that it lacks support, as Ayloush did before an interfaith audience, challenges the depth of that commitment.

CAIR should be indicted!!

CAIR has been supporting terrorists during rallies, seminars and University events for years. Why have we waited so long to probe them or carry out investigations, when we solid evidence and proof by pictures or video, that these people are invovled in radical islam in our own back yard. They use our freedoms to thier advantage and its unfortuante that we cannot do anything about it.