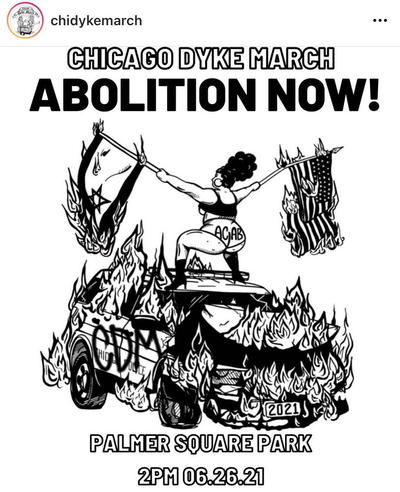 Another weekend has passed where Jews have been excluded from progressive spaces unless they toe the line and renounce support for Israel.

Organizers of the Chicago Dyke March, describe themselves as "anti-racist, anti-violent, volunteer-led, grassroots" activists seeking "to bridge together communities across race, ethnicity, socioeconomic status, age, size, gender identity, gender expression, sexuality, culture, immigrant status, spirituality, and ability." But they again decided to exclude Zionists and pro-Israel activists from participating in their June 26 Pride march. The 2017 march made headlines after participants carrying Jewish pride flags were asked to leave. Organizers said the mere presence of the Star of David made people uncomfortable.

A flyer promoting this year's march posted on its Instagram page over the weekend featured a caricature of a woman standing atop a flaming police car with a burning American flag in one hand, a burning Israeli flag in the other. "Chicago Dyke March Abolition Now!" was scrawled on top of the flyer. "Abolish CPD, Abolish the Isra*li Occupation Forces, Abolish ICE, All power to the people."

The flyer was removed after a backlash and Instagram's determination that it violated its community guidelines.

"Update: photo has been deleted, now a new one is up with flames covering the flags. The post reads 'Tired of Social Media Censorship?" activist and New Zionist Congress co-founder Blake Flayton tweeted. "I'm noticing a familiar trend where the antisemites do something antisemitic, get confronted, and then say they're being silenced."

In Philadelphia, an Israeli food truck was disinvited from a festival "celebrating diversity through food, art, entertainment, community," after other participants complained and threatened to protest.

"We won't be attending 'The Taste of Home' event, this Sunday on Father's Day," the Israeli food truck Moshava shared on Instagram. "We are deeply saddened by this. The organizers of the event heard rumors of a protest happening because of us being there and decided to uninvite us from fear that the protesters would get aggressive and threaten their event."

The nonprofit group Sunflower Philly also took to Instagram to notify patrons that the weekend food truck festival was cancelled.

"At Sunflower Philly we truly believe in creating a positive and inclusive community space here in Philadelphia," they wrote. "Due to the ongoing situation with one of our event partners @eatuptheborders and @moshava_philly we have decided to cancel the 'Taste of Home' event today."

"We were really hoping that the organizers @eatuptheborders and @sunflowerphilly would step up to the plate and defend local, small and immigrant based businesses, no matter where they are from," Moshava's post said. "... By the looks of it fear, violence, and intimidation got the best of them."

"We really do hope that in the future you don't succumb to such antisemitic and dividing rethoric (sic) and keep true to your words of a safe environment for all religions and nationalities- not just all of them except Israeli and Jewish ones."

Eat Up the Borders, the event's sponsor, issued a detailed apology. Moshava's truck was welcome previously, but organizers felt if the Israeli truck was present, a Palestinian truck should be, too. When the Palestinian truck couldn't attend last weekend's event, they decided it somehow wasn't fair for Moshava to be there.

"We understand that our actions have hurt you and we are truly sorry," the statement said. "We want to be very clear that we do not support antisemitism or allow antisemitism in our spaces. Our actions were ignorant and inexcusable.

"We now see that excluding any particular vendor in the name of trying to protect them was the wrong decision. We did what we thought was best in the moment, but we failed. Since then, we have cooperated with authorities to answer any of their concerns. We were ignorant in our actions, and it was inexcusable. We do not wish for this to be swept under the rug or forgotten, but rather we wish to learn from our actions and make up for our mistakes with help from our community as we continue to educate ourselves. We are in touch with leaders from the Jewish and Palestinian community to aid us in our growth and further the conversation."

These public events that are welcome to all, except supporters of Israel, are not isolated incidents.

The group Muslims4Abolition advertised a Juneteenth rally last year as "open to all minus cops & Zionists."

June 19th, or Juneteenth, commemorates the day the last slaves were freed in Texas, a full two years after President Lincoln signed the Emancipation Proclamation. Muslims4Abolition marked an event celebrating freedom by engaging in blatant bigotry. And unsurprisingly, the event was retweeted and promoted by anti-Semite Linda Sarsour and her organization MPower Change. Sarsour has argued that Zionists cannot be feminists and that "nothing is creepier than Zionism."

A Toronto-based restaurant also came under fire last year after the owner used the hashtag "Zionists not welcome" in social media posts.

"We are the ragged ranks of isolated objectors doing the dirty work of calling out anti-Zionism in America's powerhouses and hinterlands," wrote Tablet Magazine contributor Kathryn Wolf. "Because that's the stuff that rots the floor joists, leading to the moral collapse of otherwise good Americans who will grow to favor Deadly Exchange, and reject things like funding the Iron Dome that protects innocent Israeli children from rocket fire."

"And once that happens, they're just a breath away from justifying why someone might want to smash the face of, say, one Joseph Borgen, a red-headed accountant who had the misfortune recently to walk through Midtown while Jewish."

It is unclear what advocates of this kind of exclusionary behavior think they accomplish.

Banning Jews from progressive spaces will do nothing to help change Israeli policy or ease tensions between Israelis and Palestinians. But there is evidence it increases anger and hatred.

The London-based Community Security Trust found a 438 percent increase in anti-Semitic incidents mostly linked to the recent Israel-Hamas conflict that took place mid-May. Jew-hatred soared globally as activists took to the streets to rally in support of Palestine and called for Israel's destruction.

"Lo and behold, it turns out that vehement online anti-Zionism inspires people to engage in antisemitic violence offline, endangering Jews as a result," wrote activist Eve Barlow in Tablet Magazine. "In the streets of major cities around the world, Jews have been targeted with fireworks, with fists, and with human spit. Who knew this could happen? Well, we did, and we tried to make noise about it."

Banning Zionists and Israeli food trucks from gay pride parades and food festivals will not "free Palestine." It does fuel tension and animosity toward visibly Jewish people and neighborhoods. It promotes anti-Semitism, and should be condemned for what it is.