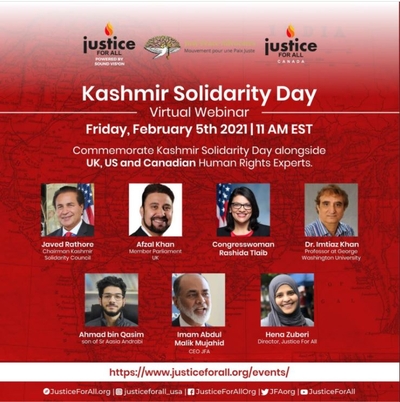 A Kashmir Solidarity Day event, dedicated to promoting the Islamist narrative on a decades-old conflict, drew the radicalized son of a prominent jihadist as well as a sitting member of Congress.

U.S. Rep. Rashida Tlaib, D-Mich., spoke at the Feb. 5 webinar sponsored by Justice for All, the activist arm of the Chicago-based multimedia company Sound Vision. Sound Vision is an offshoot of the proselytizing group, the Islamic Circle of North America (ICNA).

Tlaib discussed a 2019 voiding of a 70-year-old "temporary" provision that divided the disputed region of Jammu and Kashmir (J&K) into two federally-administered territories that are now governed directly by New Delhi.

She described "the horrific images, the horrific actions by the Indian government," in the aftermath of the 2019 action. "We know that it [India] continues that form of oppression, not only ... in Kashmir, but all around the country, but we are stronger when we come together and fight against those injustices."

Tlaib's comments fit into a broader campaign to misrepresent and exaggerate the situation in J&K.

India imposed political detentions, Internet and media restrictions after the status change to maintain order. Many of those restrictions have since been lifted and mainstream political figures released. Local-level elections were successfully conducted in the union territory in December.

Tlaib responded to India's changes by introducing a resolution in Congress "condemning the human rights violations taking place in Jammu and Kashmir and supporting Kashmiri self-determination." The resolution has not advanced.

Qasim described the Kashmir policy under successive Indian administrations as "evil" and claimed that "both in the Indian secular liberal imagination, and in the Hindu fascist imagination, Kashmiris are demons, they constitute the other, and they are killable people."

His Twitter posts, that are now visible only to his followers, advocate Islamist insurrection in Kashmir. 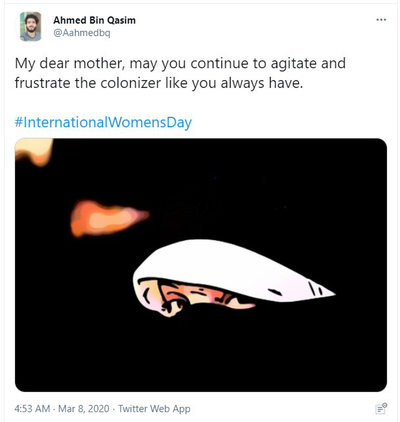 "My dear mother, may you continue to agitate and frustrate the colonizer like you always have. #InternationalWomensDay," Qasim wrote last March. Another tweet quoted Hizbul Mujahideen terrorist Riyaz Naikoo saying, "No colonial occupation has continued forever, and it is our firm belief that the Indian rule in Kashmir will also collapse sooner or later, until then, we will fight."

A former top commander of the Jamiat-ul-Mujahideen (JUM) Faktoo was sentenced to life imprisonment for his role in the 1992 murder of prominent Kashmir Pandit (Hindu) human rights activist Hriday Nath Wanchoo.

The pro-Pakistan JUM emerged in 1990 as a breakaway faction of the U.S.-designated terrorist group Hizbul Mujahideen (HM) and is reported to have carried out terror attacks in J&K. Faktoo reportedly is a founding HM member.

Qasim's mother, Aasiya Andrabi, is a hardcore pro-Pakistan separatist leader. She was arrested in April 2018 for running the terrorist organization Dukhtaran-e-Milat (Daughters of the Nation). In December, a National Investigation Agency (NIA) court ordered Andrabi and two of her associates be charged with sedition and conspiracy to commit terrorist attacks.

Dukhtaran-e-Milat, a banned outfit, has "called for jihad and use of violence against India," India's National Intelligence Agency said.

In 2015, Andrabi addressed a Jamaat-ud-Dawa (JuD) rally in Pakistan via telephone. The rally was led by JuD chief Hafiz Saeed.

Saeed is the co-founder of the U.S.-designated terrorist group Lashkar-e-Taiba, which was responsible for the 2008 Mumbai terror attacks that left 183 people dead and hundreds injured.

"There is a dire need for Muslims to rise to the occasion and wage jihad against the forces occupying Palestine, Kashmir and Chechnya," she said. "A Muslim who dies without an urge of jihad in his heart dies as an infidel and not as a Muslim."

Sound Vision, the Kashmir Solidarity Day webinar organizer, was created in 1988 by the Islamic Circle of North America (ICNA), which was set up to establish "Iqamat Deen," the Islamic system of life, in North America with the ultimate goal of founding a global Islamic state or caliphate.

It has a long history of advocating for Kashmiri self-determination. ICNA's flagship publication, The Message International, featured an exclusive interview with Syed Salahuddin in 1997, lauding the Hizbul Mujahideen (HM) commander as the "undisputed leader of the mujahideen struggling to liberate the territory of Kashmir from brutal Indian occupation." The U.S. Department of State designated Salahuddin a Specially Designated Global Terrorist (SDGT) in 2017.

ICNA's ideology mirrors that of the Jamaat-e-Islami (JI). The JI is a South Asian Sunni revivalist movement which was created in 1941 by Islamist ideologue Maulana Syed Abdul Ala Maududi in Lahore, Pakistan, which was then part of British India.

Maududi preached, "wherever you are, in whichever country you live, you must strive to change the wrong basis of government, and exercise all powers to rule and make laws from those who do not fear God."

During the webinar, UK Parliamentarian Afzal Khan described J&K as "one of the oldest unresolved dispute[s] on the UN books." He added, "the suffering of the Kashmiri people is not new, but it's been going on for more than 70 plus years. And what is sad is that the suffering is actually increasing by the day."

Khan, who claims to be "the voice for the voiceless Kashmiris," addressed a July online seminar in memory of Jamaat-e-Islami's former ameer Syed Munawar Hasan. Khan described Hasan as an "amazing" and "charismatic" individual and expressed admiration for his "commitment [and] dedication [to] goals." Afzal said he has known Hasan through this association with the UK Islamic Mission and Tehreek-e-Kashmir and saw him at conferences during the latter's trips to Britain and Europe.

Soon after U.S. Navy SEALS shot and killed Osama bin Laden in his Abbottabad, Pakistan compound, Hasan said people like bin Laden do not die but continue to live in the hearts of people. "We need to develop readiness for Jihad and passion for shahadat [martyrdom]," he wrote in 2016. He reportedly called the United States Pakistan's enemy, stating: "America was our enemy yesterday, it is so today, and tomorrow too it will not refrain from enmity against us."

Tlaib, meanwhile, likened the conflict in Kashmir to the Palestinian cause and promised to be "a fighter and a partner in the United States Congress."

"We have truth on our side and we always will because every single child that is harmed will continue to speak the truth even years later as they try to pretend it never happened and they will," Tlaib said. "And as a daughter of Palestinian immigrants, I see it happening to my ancestors, my family, every single day."

Tlaib's remarks at a webinar featuring supporters of the JI and Kashmiri jihadists are not surprising. They simply follow a past pattern of embracing Palestinian radicals who seek Israel's destruction and support terrorists.