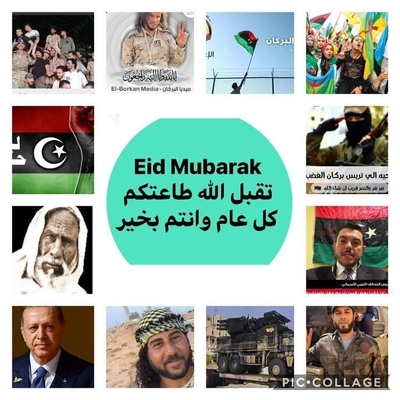 Esam Omeish posted the graphic that includes his own picture along with Turkish President Recep Tayyip Erdogan and three jihadists killed in battle over the past year.

A Google image search identified the three dead jihadists as:

Omeish denied knowing the connections of the jihadists who appeared in the graphic.

"The graphic (which I have since taken down) is [a] collection of pictures of famous fighters who died defending the capital of Libya and my birth place Tripoli," Omeish said in an emailed statement. "They are members of the fighting forces that are under the command of the Libyan Army led by the legitimate internationally recognized government of National Accord led by the Supreme Commander and Prime Minister Mr. Fayez Sarraj."

Omeish did not explain why he took the post down, or how – out of all the people fighting for the Libyan army – he somehow inadvertently used images of three jihadists.

He posted an open letter to President Barack Obama in February 2016 asking for support for Revolutionary Council of Derna, which Omeish described as "an alliance of moderate Islamists and local city council leaders."

But that same year, al-Qaida operative Ebu Al-Bara El-Azdi posted an online essay about Libya. The Shura Council of Derna, he wrote, "came from the Oldest Mujahideen group, none other than AQIM," referring to al-Qaida in the Islamic Maghreb.

Omeish also claimed in his statement that he rejects violent extremism. But his own words call that denial into question.

He has openly called upon Muslims to carry out jihad to "liberate" Palestine, including during a 2000 rally outside the White House, videotaped by the Investigative Project on Terrorism (IPT), in which he praised Palestinians for knowing that the "jihad way is the way to liberate your land."

He was forced to resign from a Virginia state immigration panel in 2007 after the Investigative Project on Terrorism (IPT) published video of the speech.

In 2004, Omeish mourned "our beloved Sheikh Ahmed Yassin" – the Hamas founder – after Israel killed him for his role orchestrating terrorist attacks inside Israel. Erdogan's presence in the Eid graphic also is at odds with another part of Omeish's statement, in which he expresses a desire for a "civil democratically and peacefully elected inclusive government in Libya."

Under Erdogan, Turkey imprisons and tortures political opponents and has all-but-eliminated a free press, policies which cannot be the model for an "inclusive government."

But Erdogan supports the Muslim Brotherhood and has trained and supplied jihadists in Syria and Libya.

"The Second Turkish Republic is born today to form the extension of the ancient Ottoman Caliphate and bury the cast off secular first republic from its roots and glorious history," Omeish wrote on Facebook after Erdogan's 2018 re-election. "A new presidential system translates the amended Turkish Constitution with democratic people's support and establishes a rightly guided governance which champions Turkey as a powerful prestigious state with a unique, historic leadership, which, if God wills, links the past to a promising future."

Libya's government remains in flux nine years after dictator Muammar Gaddafi's fall. The Muslim Brotherhood controls part of the country and is fighting to preserve power.

The Brotherhood and aligned jihadists refused to accept the results of a 2014 election. Instead, the Libya Dawn militia kicked the House of Representatives out of Tripoli and exiled it to Tobruk.

A reconciliation agreement brokered by the United Nations in December 2015 led to the formation of an unelected Government of National Accord (GNA) that had significant Brotherhood elements. Rejecting that Islamist influence, the Libyan House of Representatives refused to grant the GNA a required vote of confidence as mandated by the agreement. U.S. officials recognize the GNA as the legitimate government of Libya even though the GNA did not follow the terms of the U.N. agreement.

A Libyan House of Representatives committee in 2017 placed Omeish on its list of Muslim Brotherhood and al-Qaida linked terrorists.

Former Libyan parliament member Monem Alyaser, a former colleague of Omeish's, told the IPT that Omeish built numerous Libyan-American organizations that have lobbied on behalf of the Muslim Brotherhood. Many of those organizations have since become defunct.

LAA urged supporters to contact members of Congress, suggesting they say the bill "would clarify US policy in Libya, hold those destabilizing Libya and committing human rights violations accountable." A House version has 11 co-sponsors, including Democrats Tom Malinowski of New Jersey and Ted Lieu of California. Republican co-sponsors include Adam Kinzinger of Illinois and Joe Wilson of South Carolina.

No action has been taken in either chamber since the bills were introduced last November.

But the LAA has focused its lobbying on behalf of the bill supporting the U.S.-government supported Government of National Accord against the Libyan National Army headed by Field Marshal Khalifa Haftar, Egypt and the United Arab Emirates.

Omeish has given Malinowski $2,100 in campaign contributions since 2018, according to Federal Election Commission records.

Malinowski appeared with Omeish last July at an LAA event announcing a federal lawsuit against Haftar for war crimes damages. Malinowski and U.S. Rep. Gerry Connolly, D-Va., spoke out strongly against Haftar at a May 2019 hearing on Libya.

Connolly received $6,700 in contributions from Omeish since 2014.

Omeish may be getting his wish without congressional help. Haftar's forces have suffered significant defeats, and reportedly have been pushed out of Tripoli.

"Unfortunately, the French are labeling the Government of National Accord, also the GNA, as the military forces of the GNA, many cities of the West ... as being under the influence of Islamists. Our Islam is a moderate pluralist form of Islam," al-Mishri said.

Omeish denies knowing that the people in his posting were jihadists. Maybe that's true. But it's an odd coincidence to see a Muslim Brotherhood supporter who praises Palestinians for choosing "the jihad way" as the path to liberation accidentally incorporate three jihadists in his graphic.