Washington Lobbyists Duke It Out Over Libya's Civil War 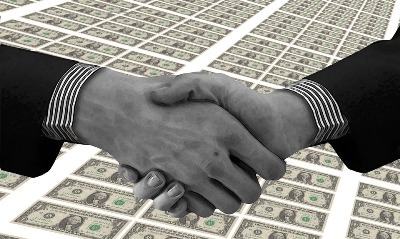 Both sides in Libya's ongoing civil war are waging political warfare in Washington. They have enlisted lobbying firms to shape perceptions of the conflict in Congress and within the Trump administration.

Libya's civil war pits militias backed by its democratically-elected House of Representatives (HoR), based in Benghazi, against those loyal to its Tripoli-based, Islamist-dominated Government of National Accord (GNA). Unfortunately, neither faction has "clean hands." Both employ mercenaries, are supported by foreign powers, and have been accused of war crimes.

The GNA formed in December 2015 through a United Nations-brokered agreement that was backed by the Obama administration and the European Union. This pact aimed to unite the Islamists who were installed in the capital in August 2014 after Muslim Brotherhood and allied al-Qaida militias exiled the secular/liberal dominated House of Representatives (HoR) to Tobruk in eastern Libya. The Islamists rejected elections in June 2014 which the Muslim Brotherhood lost in a landslide.

Numerous GNA members supported the jihadists who ousted the HoR from Tripoli in 2014. That has remained a sticking point for Field Marshal Khalifa Haftar, who leads the forces loyal to the HoR. Parliament members balked at a demand to transfer control of Libyan military forces to the GNA. The agreement that created the GNA expired in 2017. The Presidential Council was required to receive a vote of confidence from the House, but that never happened.

The split never healed, with both sides claiming to be Libya's legitimate government – the HoR based on popular elections and the GNA based on international agreement.

Turkey and Qatar back the GNA, providing it with weapons and mercenaries in violation of a United Nations arms embargo.

Human rights observers have accused militias loyal to both sides of torture, war crimes and other abuses, but those committed by the GNA have generated less news coverage. They also have accused the pro-GNA militias of using human shields.

Haftar has been the focus of critical reports. His forces, which control most of Libya's territory, have waged an offensive in Tripoli to end what they see as the Muslim Brotherhood and "terrorist" control of the city.

The lobby war took off in earnest following an April 2019 call between Haftar and President Donald Trump, in which Trump endorsed Haftar's offensive.

Since that call, however, the administration appears to have backed away. Haftar's hired lobbyist reportedly could not get him an official visit with administration officials last summer.

Haftar's offensive is driven by "what we call the three Ms – the militias, the money, and the Muslim Brotherhood," an unnamed senior State Department officials told reporters during a February background briefing. Haftar's actions, the official said, are "directly counterproductive to [his] goals. He is – his offensive is empowering militias in Tripoli."

Mercury has been paid $150,000 per month for the past year as part of a $2 million contract with the GNA. Mercury also works for Islamist governments supporting the GNA, including Turkey and Qatar.

Former Louisiana U.S. Sen. David Vitter is Mercury's point man for the GNA and Turkey, FARA documents show. POLITICO reported last year that Vitter is one of about a dozen of the firm's employees working on the Libyan contract.

In a March filing, Mercury denied that the GNA has connections with the Muslim Brotherhood or its Justice & Construction Party (JCP): "There are zero JCP members serving in the Government of National Accord (GNA); the GNA does not receive any type of support from the JCP, and the GNA would reject any offers of same."

But Brotherhood members dominate the GNA's financial institutions, including the Central Bank of Libya (CBL), over which the U.N. Security Council gave the GNA sole oversight in 2017. The CBL oversees all of Libya's multibillion dollar oil revenues and distributes them as it sees fit. It has given the GNA limited funding and refused to allow a required audit.

Former Libyan Ambassador to the United Arab Emirates Aref Nayed, who originally worked with the GNA, described the Brotherhood's control of the bank as "parasitic" and a "state within a state." The CBL pays millions to the GNA-aligned militias.

Haftar's supporters in Saudi Arabia, Egypt and the United Arab Emirates back him largely due to their hatred for the Muslim Brotherhood. Russia and Turkey covet Libya's oil.

But Gotham has characterized Haftar as a new Gaddafi. It claims that Haftar wants to be the military ruler of Libya, which the LNA rejects, affirming its allegiance to the House of Representatives.

Much of this rhetoric is similar to that used by Muslim Brotherhood supporters in the United States before the GNA hired Mercury and Gotham.

Esam Omeish hosted al-Mishri, the GNA state council chairman, at his Virginia home in February 2019. Al-Mishri met with Malaysian Brotherhood leader Anwar Ibrahim at the office of the Brotherhood-linked International Institute for Islamic Thought (IIIT) in Herndon, Va. during the same visit, a post on Omeish's Facebook page showed.

Besides casting Haftar as a war criminal and using rhetoric previously used by Brotherhood supporters, the GNA lobbyists have highlighted Haftar's use of foreign mercenaries, including Russia's Wagner Group, while ignoring their client's use of them.

Haftar ordered his men to "take no prisoners" in a 2015 battle with ISIS, saying "never mind [the] consideration of bringing a prisoner here. There is no prison here. The field is the field, end of the story" in a video. Several videos appeared to show his forces engaging in summary executions of unidentified men near Benghazi in 2017. The International Criminal Court indicted LNA commander Mahmoud Mustafa Busayf al-Werfalli that year on war crimes charges.

Turkey violated the United Nations' arms embargo in Libya and sent Syrian jihadists to fight alongside Islamist militias loyal to the GNA.

Since December, Turkey has ferried at least 7,400 Syrian jihadists who belonged to al-Qaida linked groups to fight against Haftar, the London-based Syrian Observatory for Human Rights reports.

Turkish fighters captured by Haftar's Libyan National Army (LNA) during the battle for Tripoli confessed to working for Turkey's intelligence agency, the MIT, a report by the European Eye on Radicalization said. Turkey's MIT has supported militias linked to the Muslim Brotherhood and al-Qaida.

One, the Sultan Murad Brigade, is connected with the Syrian Muslim Brotherhood. It developed a brutal reputation following the Turkish occupation of Afrin, Syria's Kurdish enclave. These jihadist mercenaries have been operating under a six-month contract paid by the GNA, Deutsche Welle reported.

Mercury claims that the GNA has worked to eliminate militias and fight terrorism. But the militias remain, and have built a cartel that controls state institutions.

U.S. policymakers still support the GNA because it enjoys international diplomatic recognition, which "which in the eyes of the international community makes it the most legitimate interlocutor in Libya," Joshua Meservey, senior policy analyst for Africa and the Middle East at the Heritage Foundation, told the Investigative Project on Terrorism.

"I do think the U.S. government needs to be very cautious about the GNA and have its eyes wide open in engaging with it, however," Meservey said.

GNA Interior Minister Fathi Bashaga concedes that the militias dominating the GNA's security forces have more power than GNA's leadership. Despite its international diplomatic recognition, critics say the GNA is a façade, and the militias call the shots.

The U.S. government also doesn't pay attention to the abuses by GNA-linked militias because they helped the U.S. military defeat ISIS, he said.

"They do not answer to the law or the instructions of the Attorney General," Bashaga said in February.

"The GNA's presence in Tripoli is underwritten by the support of powerful local militia groups, some of whom are reportedly involved in human rights abuses, crime, and illegal detentions," a 2018 Congressional Research Service report said.

One such militia in Tripoli, known as the Nawasi Battalion, recruited members of the al-Qaida linked Mujahideen Shura Council of Derna. The battalion also includes members of the Benghazi Revolutionaries Council, which was linked to the 2012 attack on the U.S. consulate that killed Ambassador Christopher Christopher Stevens and three other Americans. Appointments to GNA government bodies have been made with strong pressure from the militias. For example, the Nawasi Battalion leader's son-on-law was appointed head of the GNA's Ministry of Finance budget office.

Last fall, the GNA appointed militia leader Salah Badi head of its military intelligence. The U.S. Treasury and U.N. Security Council sanctioned Badi in 2018 due to his militia's hindrance of peace in Libya. Badi also was a past associate of Wisam Hamid, who was linked to the 2012 attack on the U.S. Consulate in Benghazi.

The United States should pursue a policy of strict neutrality in Libya's civil war, according to Meservey. Both sides employ mercenaries, are supported by foreign powers, use radical Salafist fighters, and have been accused of war crimes. He believes the U.S. should use its immense diplomatic heft to get Turkey, Qatar, Russia and other foreign powers to leave and stop arming the militias, and to hammer out a final agreement to end the civil war.

"None of them have legitimacy. What we have said is that you should push for cease fires nationally, see if you could push for some kind of political agreement, but municipal governments might be the way to go because they are a lot closer to the people," Meservey said.