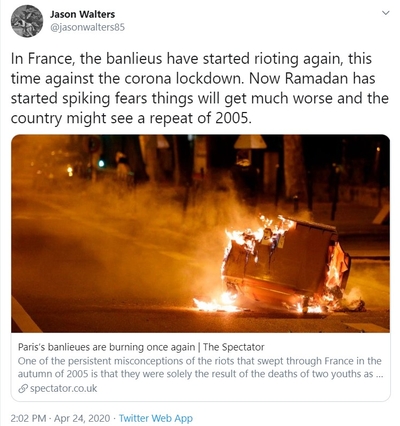 Riots recently broke out in the city's banlieues, the working class, largely immigrant areas known for their high crime rates, and where Muslim youth have long clashed with French police. In 2005, the death of two young Muslim boys from Clichy sous Bois, for instance, led to weeks of uprisings. Thousands of cars were torched, as were schools, synagogues, mosques, churches, and shops. Three people died in the melée; 126 – mostly first responders – were injured. Now, officials fear a repeat of the 2005 uproar as Muslim youth react against COVID-19-related restrictions, felt particularly acutely at the start of Ramadan.

And it isn't only Paris. While the rest of us concern ourselves with the health, safety, and well-being of our families and loved ones, extremists of all types are using the coronavirus pandemic to recruit, propagandize, and even to stage attacks across Europe and parts of the Middle East and North Africa.

ISIS and other extremist groups – including those from the far right and far left – deliberately exacerbate fear of the virus and an overall sense of vulnerability as a means to "reinforce their strategy and call for action," counterterrorism expert Andreea Stoian Karadeli said last Thursday during a webinar sponsored by the Geneva Center for Security Policy (GCSP). In addition, they have used disinformation to recruit, often by promoting hate against enemy groups – infidels and Jews, for instance – whom they blame for the pandemic.

In fact, she warned, "With the COVID-19, the problems that we had in our society have not disappeared. They actually got more intense, and have been empowered by the virus."

Indeed, early in the pandemic, ISIS, al-Qaida and other Islamist terrorist groups encouraged their followers to exploit the situation, calling COVID-19 "a soldier of Allah" and recommending attacks where people were likely to gather during the lockdowns: grocery stores and hospitals. And with students now stuck at home and largely locked onto the internet, radical groups are taking the opportunity to spread their online outreach among vulnerable youth, promoting hate-filled conspiracy theories, many of which blame Jews for the virus.

Added to this, the lockdowns also allow for the nursing of grievances – again easily exploited by those hoping to motivate destructive and violent action. In the largely-Muslim Brussels section of Anderlecht, for instance, riots broke out earlier this month after a young Muslim man died when his motor scooter crashed into a police car. The 19-year-old – identified only as Adil C. – had been pulled over by police for questioning after they spotted him on the streets in violation of lockdown orders.

Rather than comply, however, Adil raced off, only to collide with an oncoming backup car during the ensuing chase. He died on the scene. A bystander filmed the entire event– then posted the video online, calling for revenge under the hashtag "#JusticePourAdil" (JusticeForAdil).

"It is clear they did not come here to honor the memory of the young man who died, but were looking for a confrontation with the police," Anderlecht Mayor Fabrice Cumps later told Belgian national De Morgen.

Belgian leftists, too, are hoping to exploit the situation to attack police and other authorities. The pro-anarchist platform IndymediaBruxsel posted a pamphlet on April 8 providing instructions for possible action, beginning in May.

"The time is right to attack," the text said. "Our opponents are busy with other things. Authorities were never so overworked and yet so omnipresent in public, with their police cars and drones, or on foot patrol.... What would happen if we attack them with stones, explosives, and Molotov cocktails?"

How to do it? In a clear effort to take advantage of the crisis, the pamphlet notes that "hydro-alcoholic hand gel can also be used to set fires."

Notably, too, Belgium's Nieuwsblad reports, an update to the site also points to the death of Adil, which will "never be forgiven or forgotten." Accordingly, the call for protest in his memory points out that "Confinement has its negatives... but also some advantages: it is recommended to wear masks, and it is completely normal to wear gloves (no fingerprints!)"

While to date no violence seems to have erupted from anarchist groups, the same cannot be said of Islamists. In Romans-sur-Isere, a town outside Lyon where lockdown rules allow residents only to shop for groceries and other essentials, a Sudanese immigrant selected a street lined with bakeries, butchers, and tobacconists to whip out a knife on a sunny April Saturday and slash the throat of a Romanian man before his wife and small child. He attacked two workers and a customer in a tobacco shop before fleeing for a butcher shop and subsequently a nearby grocer. Police arrested him outside, praying in Arabic, the New York Times reported. Investigators later found documents in the suspect's home expressing anger at living in a country "of unbelievers." Two people were killed and eight injured, two critically, in the rampage.

Less than two weeks later, on April 15, another knife-wielding man identified only as "of Afghan origin" threatened police while they were patrolling a park outside of Paris – part of new measures to secure COVID-related 'shelter in place" regulations. When he lunged toward them, the officers opened fire, shooting him "multiple times," police later stated. While terror motives have not been determined, "nothing has been ruled out," they said. Past similar knife attacks on French police were determined to have been terror-related.

Moreover, counterterror officials are evidently not as distracted as ISIS and other terror groups may have thought. On April 15, for instance, German officials arrested four Tajik extremists believed to have been planning to attack U.S. Air Force bases. Plans also seem to have been in the works to assassinate critics of Islam. The four, who swore allegiance to ISIS in 2019, Deutsche Welle reports, also "had contacts with high-ranking figures from the group in both Syria and Afghanistan."

Similarly, on April 16, Poland's special services apprehended a resident of Lebanese origin, also said to have had ties to ISIS, and who had been in regular contact with the group and with other ISIS members based in Europe. His ultimate aim: "to set up a network in Poland and elsewhere in the EU that would carry out attacks in western European countries," according to a statement from the Polish special service.

In fact, in some instances, conditions created by the COVID pandemic have even proved helpful in fighting the terror threat. Early on, ISIS leaders advised former fighters planning stealth returns to their European homelands to avoid Europe altogether, even as they called on Europe-based sympathizers to launch attacks. Others who were slated to return under official conditions, such as women and children held in the Kurdish-run camps, or those who, like the Belgian ISIS widows Tatiana Wielandt and Bouchra Abouallal, had been captured and held in Turkish prisons awaiting extradition, are also unable to cross the now-heavily controlled borders into Europe.

Those controls have also helped lawmakers capture several widely- and long-sought terrorists, including one unnamed Belgian-Moroccan who had evaded law enforcement for 12 years. The 51-year-old, charged with affiliation with a Moroccan-based terror group, was planning an attack when the car he and a friend were traveling in was stopped for a routine Corona check on the Luxemburg-German border.

And in Spain, police tracked down and detained notorious British-Egyptian ISIS fighter Abdel-Majid Abdel Bary, a former rapper and son of U.S. embassy bomber, Adel Abdel Bary. According to Britain's Daily Mail, Bary and two accomplices had "adapted their behavior to the state of emergency...as a consequence of the Covid-19 pandemic, making few exits, separately, and always with masks to avoid being detected."

Still, experts warn that officials will need to maintain high alert, even as they are distracted by the events surrounding the virus's ongoing spread.

"If we take our eye off the ball for one second, given that we are under extreme conditions, we give these groups and networks the windows of opportunity that they seek," counterterrorism consultant Munir Zamir noted at the GCSP event. "And so actually inadvertently we may be one of the decisive factors in the re-emergence of certain narratives, actions, and ideology. And if we are talking about fear, we are no longer talking about hope. And one of the things that diasporas and communities will need to inoculate themselves against narratives of hate and extremism is narratives of hope, and of unity."