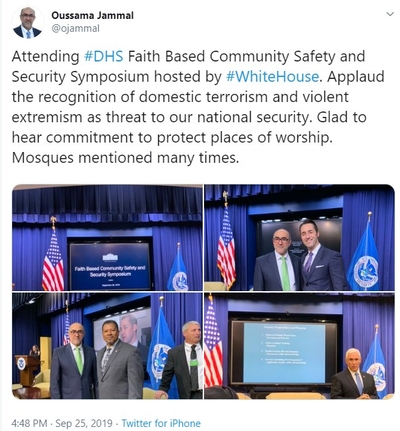 Trump administration officials continue to meet with American Islamists on domestic and foreign policy issues, though it is unclear whether these engagements influence the administration's policies.

In September, the Department of Homeland Security (DHS) held its Faith Based Community Safety and Security Symposium at the White House. Oussama Jammal, secretary general of the Islamist U.S. Council of Muslim Organizations (USCMO) attended, along with representatives of the Muslim Public Affairs Council (MPAC). They were among 180 participants representing faith-based communities, the federal government, and state and local governments who participated. Vice President Mike Pence spoke at the event.

The symposium focused on security at mosques and other places of worship in the wake of recent white supremacist terror attacks at mosques and synagogues in America.

DHS previously nixed a nearly $400,000 countering violent extremism grant to MPAC that the Obama administration issued in its waning days. A DHS source noted this happened due to concern over MPAC's past anti-Semitic statements and rhetoric the agency felt could contribute to Muslim alienation. That rhetoric included MPAC's claim that counterterrorism measures were a "War on Islam." That narrative is considered highly effective in radicalization and at helping terrorist recruiters. MPAC's other radical positions include:

Despite that history, then-Acting DHS Secretary Kevin McAleenan last May urged that MPAC be included in a Homeland Security Advisory Council's Subcommittee on Faith-Based Organization Security. A month later, MPAC promised to work with the Council on American-Islamic Relations (CAIR) and other Islamist groups to formulate mosque safety recommendations to DHS.

In August, MPAC touted a meeting with representatives from DHS's Civil Rights and Civil Liberties branch.

Anti-Semitism among USCMO members, along with their support for foreign terrorists and opposition to efforts to prevent Islamist terror on American soil is are causes for concern.

"We've been saying for the past 10 years these are the last people the U.S. government should be consulting on matters of mosque security because they are dyed-in-the-wool Islamists ...," said Zuhdi Jasser, president of the American Islamic Forum for Democracy (AIFD). "This is a denial of the fact that their Islamism is upstream from that of the more militant Islamism."

Islamist support for militant jihadists in Syria, together with their effort to alienate Muslims from the rest of America, make this evident, Jasser said.

But they, too, have participated in Trump administration outreach events.

CAIR, for example, was an unindicted co-conspirator in the Hamas-financing prosecution against the Holy Land Foundation for Relief and Development and five former officials. U.S. District Court Judge Jorge Solis ruled a that the evidence in that case created "at least a prima facie case as to CAIR's involvement in a conspiracy to support Hamas." The FBI ended formal liaison work with CAIR due to concern whether connections between its executives and Hamas. CAIR co-founder and Executive Director Nihad Awad is a member of the USCMO's board of directors.

Nonetheless, Customs and Border Protection agreed to send its officers to a training session in October hosted by CAIR's Chicago chapter.

The session "gave an overview of Islamic faith traditions, illustrated the rich diversity of the Muslim community, and delved into the rise of Islamophobia and how bigoted policies, including the Muslim Travel Bans, affect Muslims and other marginalized communities," CAIR Chicago said in a statement.

CBP did not respond to questions about this event.

While AMP leaders say they advocate for a Palestinian state, their statements show a more radical objective that includes eliminating Israel. The phrase "from the river to the sea, Palestine will be free has been endorsed by AMP leaders and is a ubiquitous chant at the group's events. That includes a Times Square rally co-sponsored last month by AMP. A Palestinian state "from the [Jordan] river to the [Mediterranean] sea" would cover all of Israel.

But that call for eliminating a country didn't stop AMP Executive Director Osama Abuirshaid from joining Jammal and other USCMO representatives from lobbying the State Department in August 2017. They protested Israeli security measures at Jerusalem's Al Aqsa Mosque, including cameras, which the delegation falsely described as an "ongoing Israeli effort to alter the religious landscape of Jerusalem." AMP also visited the State Department in May 2017 as part of its Palestine Advocacy Day. None of the participants reported any outcomes from these meetings.

Jammal, Abuirshaid and Awad were back at the State Department in September 2017, this time talking about Myanmar's Rohingya Muslim minority. More than 742,000 Rohingya refugees have fled Myanmar since 2017 due to violence and persecution.

USCMO has maintained an ongoing relationship with the State Department. In early September, Jammal, Awad, Abuirshaid and ICNA Executive Director Zahid Bukhari met with Deputy Assistant Secretary of State for Pakistan Affairs Ervin Massinga at the State Department to discuss Kashmir. Massinga promised to keep USCMO informed about developments on Kashmir. U.S. policy, he said, aims to bring India and Pakistan to the negotiating table to resolve the Kashmir issue.

Bukhari's Facebook page includes multiple posts supporting Jamaat-e-Islami Pakistan, which has close ties with the Hizb ul-Mujahideen terrorist group. One such post shows the funeral of Jamaat-e-Islami founder Maulana Maududi, whom Bukhari calls "mourshid" or "the leader." Maududi advocated the destruction of all insufficiently Islamic governments and replacing them with Islamic theocracies.

The Canadian Revenue Agency called this group the armed wing of Jamaat-e-Islami Pakistan. Hizb ul-Mujahideen was founded by a Jamaat-e-Islami member and evidence suggests a close financial relationship with the terrorist group.

Jammal, the USCMO leader, has been the main point of contact between Turkish President Recep Tayyip Erdogan and the American Islamist groups, former Turkish National Police counterterrorism official Ahmet Yayla wrote in a report from earlier this month.

Jeffrey said the Trump administration supported a constitutional process to bring an end to the Syrian civil war, claiming it would include all parties.

Many of the SAC's leaders belonged to the Syrian Muslim Brotherhood, according to Molham al-Droubi, a key Brotherhood leader. A 1992 phone book of the international Muslim Brotherhood seized by federal investigators listed SAC founder Talal Sunbulli as a member.

State Department officials also attended a July discussion on Syria co-sponsored by the SAC and the Erdogan-linked Turkish Heritage Organization.

By giving American Islamist groups access the Trump administration has given legitimacy to groups whose aims are at odds with American democratic values due to their theocratic goals.