While Erdogan Slammed Israel At U.N., Turkish Support For Terror Was Revealed 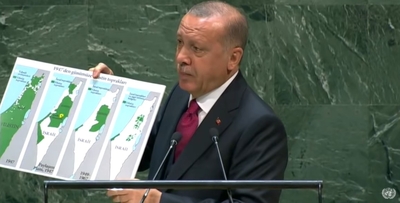 This article originally was published Oct. 1 by the Daily Wire.

Turkish President Recep Tayyip Erdogan used his United Nations General Assembly speech last week to blast Israel as the cause of "injustice" in the Middle East and vow that his country "will continue to stand by the oppressed people of Palestine as she has always done." But a new report by Israel's Meir Amit Intelligence and Information Center, as well as new sanctions announced by the U.S. Treasury Department, make it clear that Erdogan is in no position to cast aspersions.

"Turkey turns a blind eye to Hamas's covert operational and financial activity being carried out from its territory (which has recently been demonstrated in the American sanctions) and regularly denies its existence," the Meir Amit center reported.

"[T]he latest American designations clearly demonstrate that Turkey continues to be used as a hub for Hamas's operational and financial activity, even after the departure of Saleh al-Arouri," the Meir Amit report said. Arouri, a founder of the Hamas military wing and a member of the Hamas political bureau, lived in Turkey until last year.

During his time in Turkey, he helped plot Hamas terror attacks. He claimed credit on behalf of Hamas for the 2014 kidnapping and murder of three Israeli yeshiva students. Later that year, the Shin Bet "uncovered an extensive Hamas military network which operated in Judea and Samaria. Its operatives had planted IEDs in Samaria. They [were] handled by Hamas's headquarters in Turkey," the Meir Amit report said. "Hamas's military operatives who were trained abroad (in various countries, including Turkey) participated in this activity."

For his part, Erdogan considers Hamas a "liberation movement" and denies that it is a terrorist group.

While it supports the Palestinian-Arab cause, Turkey denies autonomy to more than 15 million Kurds and even represses the use of the Kurdish language. It has bombed Kurdish civilians. It occupies much of northwestern Syria and has engaged in ethnic cleansing against the Kurds there. Turkish warplanes bombed a hospital in Afrin during its invasion of the Kurdish enclave last year, independent analysis by Bellingcat, a citizen journalism organization that focuses on war crimes and criminal activities, showed.

Those include Zaher Jabarin, who heads Hamas' finance office from Turkey and manages tens of millions of dollars in Hamas money. Jabarin's transfers of U.S. dollars "finance HAMAS's terrorist activity," the Treasury statement said. Like Arouri, Jabarin was one of the founders of the Hamas military wing in Judea and Samaria. Jabarin was in charge of a Hamas squad that abducted and murdered Israeli border policeman Nissim Toledano in 1992, the Meir Amit report said.

"Jabarin has served as the primary point of contact between Hamas and the [Iranian Revolutionary Guard Corp –Quds Force] IRGC-QF. Since 2017, his relations with them were enhanced based on Hamas operatives' efforts to increase funding from Iran," the report said.

Erdogan's inner circle has encouraged bloodshed between Israel and the Palestinians by providing assistance to the al-Qassam Brigades. Israel's Shin Bet arrested two suspects last year linked to the Turkish private military company SADAT, which run by top Erdogan military adviser retired Brig. Gen. Adnan Tanriverdi. It accused them of helping Hamas' military buildup by providing money and weapons to the terrorists. SADAT's website calls for the use of military force against Israel. Meir Amit reported that Jabarin had recruited the men under instructions from Arouri.

"The liaison of Palestine with the globe should not be left at the mercy of Israel. This requires open support by Islamic countries. Every effort should be made, including use of force," SADAT says on its website.

Erdogan presented Turkey as a terrorism fighter, saying Turkey killed ISIS fighters in areas of Syria it occupies. He glossed over Turkey's clandestine support for ISIS in Syria.

"Turkey has been the country most influenced by the [ISIS] threat; this terrorist organization has harassed our borders and targeted our cities very near the borders with suicide bombings that have killed hundreds of Turkish citizens," Erdogan said. "Turkey is the first country that has delivered the heaviest blow to the [ISIS] presence in Syria."

Internal documents and whistleblowers tell a different story — one of a country that plays both sides when it comes to ISIS. Leaked emails from Erdogan's son-in-law and current Turkish finance minister, Berat Albayrak, showed his connection to an ISIS oil smuggling operations.

Turkey provided ISIS with drones and munitions, an ISIS fighter detained by the U.S.-backed Syrian Democratic Forces (SDF) who was interviewed by the International Center for the Study of Violent Extremism said. He and a Palestinian-Arab ISIS fighter held by the SDF said that Turkish hospitals provided medical assistance to wounded ISIS terrorists.

"Like me, thousands of ISIS members have been treated in Turkey. Everyone knows that Turkey is the mother of all jihadist groups," said former ISIS fighter Islam Ahmed Muhammed Balusha. "This applies to the jihadist groups in Syria, Iraq, Libya, and even from Palestine to Afghanistan. Turkey has supported the ISIS massively."

Erdogan's pretense of being the savior of the region's problems belies the fact his government has become a major terrorism supporter and is guilty of everything he criticizes Israel of doing.

John Rossomando is a senior analyst at the Investigative Project on Terrorism and Steven Emerson is its executive director.