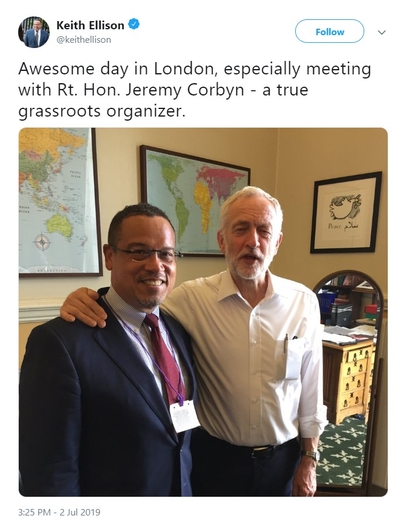 Corbyn's Labour Party has been embroiled in an anti-Semitism controversy that has seen key leaders leave the party. Nearly 40 percent of British Jews said they would consider leaving the U.K. if he were to become prime minister.

Ellison, a savvy politician, has to be aware of Labour's problems. That did not give him pause about posing with Corbyn, who has embraced terrorist organizations Hamas and Hizballah and called them his friends.

Before becoming Labour leader, Corbyn praised a re-issue of a century-old book that claims Jews control banking and the press. Corbyn wrote a foreword in the 2011 edition of J.A. Hobson's "Imperialism: A Study."

"I am sickened that Labour is now perceived by many as a racist, anti-Semitic Party," MP Mike Gapes wrote in a February resignation letter posted on social media. "But there has been considerable reluctance since then to seriously deal with hundreds of cases of anti-Semitism and several prominent anti-Semites have been readmitted to the Party."

Despite the scrutiny, "Nothing has changed," Jewish Labour Movement Secretary Peter Mason told the newspaper. "We continue to see the same behaviour that we have seen for a very long time and no action taken to tackle it."

Ellison, a former congressman, is also no stranger to embracing bigotry and anti-Semitism.

In 2010, Ellison promised at a private fundraiser that Israel's influence on American foreign policy would change once more Muslims got involved in politics.

He was also forced to denounce Louis Farrakhan, a fervent Jew-hater, despite the fact that he met privately with him in 2016. Ellison had said that his ties to the Nation of Islam and Farrakhan ended in the early 1990s.

Ellison insists he's being unfairly maligned. But he does himself no favors when, as a state attorney general, he makes a point of showing the world he's aligned with Corbyn. In 2015, Ellison criticized U.S. Rep. Steve King's invitation to anti-Muslim Dutch activist Geert Wilders.

Wilders, who has advocated banning the Quran and Islam, has a right to speak, Ellison said. But "we should not be offering the United States Congress as a platform for hate, division and bigotry."

Somehow, it's okay to provide a platform for hate, division and bigotry if it's in the United Kingdom?