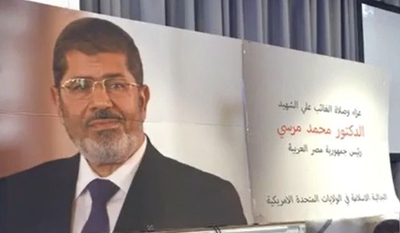 Morsi had served one year as president before the Egyptian army, responding to massive street protests, toppled his Muslim Brotherhood-led government in 2013. His supporters accuse Egypt of murdering Morsi, implying harsh conditions in the country's jails triggered an apparent heart attack.

Somehow, though, mourners at a memorial service last Wednesday in New Jersey, found a way to make Morsi's death about the Israeli-Palestinian conflict. The event was almost entirely in Arabic, videos posted to YouTube show. The Investigative Project on Terrorism translated what was said.

"Dr. Mohamed Morsi was killed because he challenged the world order and said 'No, we will not leave Gaza alone. We will not leave Gaza alone,'" said Hani Elkadi, president of the Brotherhood-supporting Egyptian Americans for Freedom and Justice (EAFJ). Elkadi's consistent Brotherhood support includes social media posts mourning the death of a leader who spun off two terrorist branches and encouraging Egyptian youth to wage jihad against the military government.

Morsi had been out of power six years when he died last week. His thoughts on Gaza were relevant for a relatively brief time.

Elkadi also placed Morsi among the Brotherhood's most revered martyrs – Sayyid Qutb, who was executed by Egypt in 1966 for plotting against the Nasser government, and Brotherhood founder Hassan al-Banna, who was assassinated in 1949.

Morsi's image dominated a giant poster at the service, which drew about 50 people to a meeting hall in North Bergen, N.J. "Condolences and absentee funeral prayer of Dr. Mohamed Morsi, President of the Arab Republic of Egypt," the poster said in Arabic. It claimed to speak for "The Muslim Community in the United States of America."

Said Abbasy, vice president of the Egyptian Americans for Democracy and Human Rights (EADHR), a group similar to Elkadi's EAFJ, also spent part of his eulogy making up a story about Israel's glee over Morsi's passing and issuing a threat.

"An Israeli Zionist report came out today from the tombs," Abbasy said. "They are happy that President Mohamed Morsi is lying in a tomb. They are telling Israel it is safe now. By Allah, you will not be safe. By Allah, you will not be safe as, Allah willing, the blood of the martyr President Mohamed Morsi will be a curse upon you, and upon all the criminals and the hypocrites, and we will pursue our revolution, as revolutionists, as freemen, we will continue the path."

Morsi did reopen the border crossing between Egypt and Gaza, but never took aggressive action against Israel. He left Egypt's 1978 peace treaty with Israel intact. Many Egyptians, especially those who marched against him, believed that Morsi spent his time in office trying to entrench the Muslim Brotherhood's control at the expense of economic and quality of life needs of Egyptians. He pushed a theocratic constitution and tried to seize emergency powers over the courts.

Across the country, the Islamic Center of Southern California (ICSC) allegedly prohibited Khaled Abou El Fadl from talking about Morsi during a sermon El Fadl was invited to give after Friday prayer. El Fadl blasted the mosque and its leaders during a 50-minute video posted on YouTube. The mosque prefers to avoid divisive political discussions after prayer unless they directly affect American Muslims, El Fadl said he was told.

That's tantamount to censoring him, he said, calling the action "authoritarian and despotic garbage." Mosque leaders are "ignorant idiots" who don't represent Islam, El Fadl said. "You are an embarrassment to Islam."

He wasn't a Morsi supporter, he said, but he did want to talk about Egypt's human rights record.

The New Jersey mourners also blasted Abdel Fattah el-Sisi's government, but their support for Morsi and the Brothers repeatedly was made clear.

Mohammad Qatanani, a Hamas-supporter who serves as imam at the Islamic Center of Passaic County, said Morsi was "known for his love for Egypt, and his love to humanity, and his love of truth, his love for democracy, and for his love to support the oppressed in Syria, in Palestine, and everywhere. He was truly a human being, he did not lose anything. He gained martyrdom, but Egypt lost him, the Muslim ummah [nation] lost him, the pious men on earth lost him, Palestine lost him and Syria lost him."

Morsi's love of democracy appeared limited, given the anti-democratic acts he took in office and his failure to protect Egypt's Coptic Christian minority.

Qatanani, meanwhile, called for a new intifada – a violent Palestinian uprising – during a 2017 rally in New York: "Our message to the Palestinian authority, you have to stop all kinds of peace process, no peace process and negotiation with the occupation in Palestine. Oslo has to be stopped and to be finished. We have to start a new intifada. Intifada, intifada!"

Morsi, he said, "has joined the ranks of martyrs. He will gladly meet with his lord. He must have joined the leaders of the ummah today with the omnipotent God, such as [Hamas spiritual leader] Sheikh Ahmed Yassin, may Allah rest his soul."

Morsi's American mourners follow groups that have "freedom," "justice" and "democracy" in their names. But the groups' rhetoric consistently shows a hatred for Israel and support for political violence, by Egyptians, Palestinians and more.

Their sadness over Morsi's death was no exception.