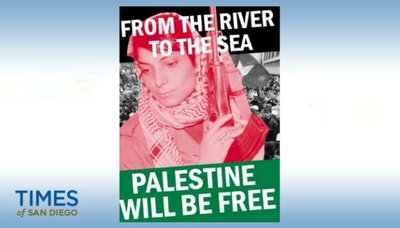 He pointed to an email from SDSU's Women's Resource Center which included the slogan "From the River to the Sea Palestine Will Be Free" and a photo of Popular Front for the Liberation of Palestine (PFLP) terrorist Leila Khaled clutching an AK-47. Khaled hijacked two airliners in 1970. Khaled and the PFLP been active in the Boycott, Divestment, Sanctions (BDS) movement that seeks to economically and politically strangle Israel. She remains a member of the PFLP's political bureau.

PFLP terrorists also gained notoriety for the 1976 hijacking of a Paris-bound Air France flight that was diverted to Entebbe, Uganda. It also claimed joint responsibility with Hamas for a deadly East Jerusalem attack in 2017 that left an Israeli female police officer dead and several others were wounded.

Coming so soon after last month's Poway synagogue shooting near San Diego, the email's imagery "seems especially shocking," Herman wrote. "But how are we to respond to a glorification of violence in a university-sanctioned newsletter?"

He invoked a 1984 statement by Abu Iyad, leader of the Black September terrorist group responsible for the 1972 Munich Olympics massacre, who told Radio Amman: "The Zionists took Palestine inch by inch. And we must retrieve it inch by inch. We believe that Palestine, from the river to the sea, is our country."

What happened at SDSU isn't isolated.

The Temple University SJP chapter posted the same image of Khaled on its official Twitter page in March 2016 in celebration of International Women's Day. Last summer, the same SJP chapter wrote a lengthy opinion piece supporting the PFLP. Chapter leader Brandon Do attacked Palestinians whom he claimed had sold out to Zionism following the 1993 Oslo Accords. He also praised PFLP founder George Habash, the "Godfather of Middle East terrorism" for "raising the Arab world's consciousness against Israel."

Supporting the PFLP has grown mainstream elsewhere on the Progressive Left. The U.S. Campaign for Palestinian Rights (USCPR) and its Executive Director Youssef Munayyer have tweeted their support for the terrorist group. U.S. Rep. Alexandria Ocasio-Cortez retweeted Munayyer on an unrelated issue in February.

Terrorists should be abhorred not celebrated.

Update: The SDSU Women's Center apologized for using Leila Khaled's image, the Algemeiner reports. It was "harrmful and hateful toward members of our Jewish community and counter to our values of encouraging and promoting a safe, supportive and inclusive environment," a statement said. The university also pledged to enact new policies "with center staff to help ensure that this does not occur in the future."