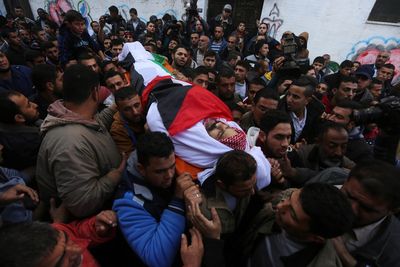 Back in 2016, the U.S. Campaign for Palestinian Rights (USCPR) posted a tweet mourning the death of a Popular Front for the Liberation of Palestine (PFLP) terrorist.

The PFLP is best known for pioneering airliner hijackings in the 1960s and 1970s. Its hijacking and subsequent blowing up of three airliners in Jordan in 1970 was the PFLP's most infamous terror attack. Forty hostages were taken off the planes before the PFLP destroyed them. More recently, PFLP terrorists carried out several suicide bombings during the Second Intifada. In 2017, the PFLP celebrated the 45th anniversary of its terrorist attack at Lod Airport that killed 26 Israelis.

The PFLP has become active in the Boycott, Divestment and Sanctions (BDS) movement, of which the USCPR is major player in the U.S. Leila Khaled – a PFLP hijacker who participated in the 1970 incident – has represented the terrorist group at numerous BDS events.

BDS aims to isolate Israel economically and politically through sanctions and economic boycotts.

PFLP refers to its terrorists as "activists." An Electronic Intifada article linked to in the tweet described the funeral of Sami Madi, a PFLP terrorist, and described him as a "Devoted Comrade." The terrorist who was killed by an Israel as he approached Gaza's border.

"Sami was a lifelong PFLP activist. His affiliation to the left wing Palestinian resistance faction began during the first Palestinian intifada in the mid-1980s when as a teenager he would throw stones at vehicles going to and from the Israeli settlements built on Gaza's land," the Electronic Intifada article said.

Jamil Mizer, PFLP's leader in Gaza called Madi, "a defiant fighter whose blood will be a further step on liberation's path."

This isn't isolated. USCPR Executive Director Youssef Munayyer is sympathetic to PFLP on his Twitter feed. He posted a PFLP communiqué in June 2017 announcing an attack in Jerusalem, noting the terrorists' "previous imprisonment by the occupation." Several other tweets remind people that the PFLP and other factions including Mahmoud Abbas' Fatah are fighting alongside Hamas "against Israel in this war."

In April, Munayyer reminded readers of his Twitter feed that Hamas leader Ismail Haniyeh carried a photo of imprisoned PFLP General Secretary Ahmad Saadat aloft and that all terror factions were united.

USCPR's propaganda claims it just wants "a just and lasting peace for Palestinians and Israelis based on human rights, international law, equality, and relevant UN resolutions." But how does that goal square with mourning a member of a terrorist group that is pledged to Israel's destruction and rejects peace negotiations with the Jewish state?

Or how does its propaganda square with the message on the "Make Israel Palestine Again" hat it sold at the recent Netroots Nation conference? These factors highlight that the USCPR is about Israel's destruction, not Palestinian rights.