IPT Exclusive: MAS Lied About School in Jihad Video Being a "Separate Entity" 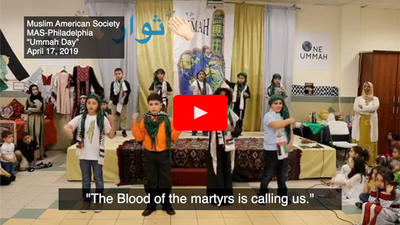 The Muslim American Society (MAS) Philadelphia chapter had a clear message after a shocking video showed up on its Facebook page last month showing school children lip-syncing to a pro-jihad song that called for beheading and torturing Israelis.

We have nothing to do with it, MAS-Philadelphia said in a statement condemning the video's content.

Even though the school is called MAS Leaders Academy, and even though it was among many school videos posted on MAS social media outlets, the statement described it as "a separate entity renting space from MAS Philadelphia."

MAS-Philadelphia has existed at least since 2003, records obtained by the Investigative Project on Terrorism show. But it filed new articles of incorporation April 25 under the name Muslim American Society of Phila, Inc.

Khatib was listed as treasurer in the MAS-Philadelphia 2003 corporate record.

In addition, Rimah Hasan, another person listed on the MAS Leaders Academy articles of incorporation, self identifies as a past MAS employee on her Facebook page.

MAS' desire to distance itself from the video is understandable. First reported by the IPT, it showed "Ummah Day" videos featuring elementary school aged Leaders Academy students. Ummah generally refers to the overall Muslim community. The children lip-synced to a song which included verses saying, "The blood of the martyrs is calling us." Elsewhere, the children continued acting out the song with light choreography, even when it promised Israelis that revolutionaries would "chop off their heads ... and we will subject them to eternal torture."

The song was produced by "Birds of Paradise," which makes popular children's songs, which often carry disturbing messages about martyrdom for Palestine.

The video's appearance on MAS social media pages was another fluke, the MAS-Philadelphia statement said.

"Unfortunately, the video from the school was uploaded to the chapter's Facebook page without verifying the content of the video for appropriateness and making sure it conforms to our hate-free policy and values. The chapter will take further steps in assuring strict adherence to publishing and posting policies."

MAS, meanwhile, is acting like it has something to hide. Not only did it take down the Ummah Day video, it took down all MAS Leaders Academy videos, including a graduation ceremony. The entire MAS-Philadelphia Facebook page was down Wednesday.

MAS was formed by Muslim Brotherhood members in the United States, who debated whether to be open or secretive about their affiliation, the Chicago Tribune reported in 2004, after interviewing MAS founders. The Brotherhood, based in Egypt, is devoted to Israel's destruction. The original Hamas charter acknowledges that it was created by the Brotherhood to be "of the links in the Chain of Jihad in the confrontation with the Zionist invasion."

In that light, the songs in the Ummah Day video are not wildly out of step with a Brotherhood-linked group.

As we noted Monday, pro-jihad rhetoric – especially involving Palestinians – has been repeatedly invoked by MAS officials and speakers at its conferences. Past president Esam Omeish praised "our Brothers and Sisters in [Palestine] ..." during a 2000 speech, for "you have known that the Jihad way is the way to liberate your land."

This came during the height of the second intifada, which was dominated by a wave of suicide bombings targeting Israeli civilians.

This history becomes even more relevant when MAS seems to be actively misleading the public about MAS Leaders Academy being "a separate entity."

MAS leaders need to do more than condemn the Birds of Paradise song performed by schoolchildren at the Ummah Day event. They should restore all the videos to determine whether this really was a failure by one staffer, whom they claim was fired.