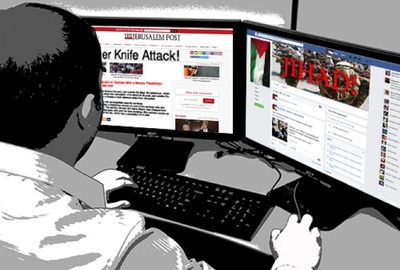 Israel's domestic intelligence agency chief Nadav Argaman last week released sobering figures on the scope of the ongoing terrorist threat facing Israelis. The figures that make it clear that the relative quiet routine in Israeli cities is deceptive, and that this quiet rests completely on counter-terrorist efforts, which almost defy the imagination in their scope.

Communities located on Israel's border region with Gaza have been experiencing frequent Hamas assaults in recent months, from rockets, mortars, and now explosive devices and Molotov cocktails attached to kites and balloons, which are sent over the border into Israel to burn down farmland and forests.

The rest of Israel, however has been mostly free of attacks for some time – though this is not because the terrorists have stopped trying.

The Shin Bet agency thwarted 250 significant terrorist attacks since January, including suicide bombing plots, shootings, and kidnappings, according to Argaman.

These plots represent organized, 'classic' terrorist attack plans generated by the major Palestinian armed factions. Most involve creating attack cells in the West Bank – although many of these plots are overseen and orchestrated from outside of the area.

In addition to the 'classic' threat of organized terrorism, the Shin Bet also is dealing with a second variant, known as the "lone attacker" phenomenon. This type of threat came to the fore in 2015, when a wave of Palestinian lone attackers – not sent, financed, or equipped by established armed factions – took it upon themselves to launch vehicle, knife, and gun attacks on Israelis.

Since that initial spike, the number of such lone attackers has dropped dramatically. This is in no small part due to significant breakthroughs achieved by the Shin Bet in the ability to accurately predict such incidents, mark out the suspects, and stop them before they act.

The intelligence agency has invested heavily in the worlds of big data, machine learning, and artificial intelligence, creating a new ability to forecast intelligence. This predictive ability has joined the traditional work of detecting and foiling organized terrorist cells.

As a result, in addition to the 250 organized plots, an estimated 400 suspected unorganized lone attackers have been stopped this year. In 2017, Israel prevented 1,400 suspected lone wolf terrorists from acting. In 2016, the number of unorganized attacks that were prevented reached 2,200.

Individual terrorists try to mimic previous attacks and often respond to incitement to violence that they see on social media forums.

The Shin Bet joined forces with other intelligence agencies in Israel, and with intelligence services in friendly countries around the world, to share its new knowledge and techniques.

When it comes to organized terrorism, Hamas leads the way in attempting to turn the West Bank into a base for attacks. It uses its headquarters in the Gaza Strip and overseas to try to create and activate West Bank terrorist cells. Its goal is to strike Israeli targets in both Israel proper and in the West Bank. Such efforts are joined by other organizations like Palestinian Islamic Jihad.

These efforts are constant and the Shin Bet, together with the Israel Defense Forces (IDF), work around the clock to foil them, often without the knowledge of the general public.

As part of its ongoing adapting to new threats, the Shin Bet has developed new cyber defense and offensive tools. These have led to quality intelligence, which in turn contributed to the prevention of major terrorist plots, and the saving of lives.

"The map of threats and challenges is diverse, and spreads out across a number of unstable and challenging arenas," Shin Bet chief Argaman said last week, outlining the two-pronged threat of organized and unorganized terrorism facing Israel.

Addressing the unorganized variant of terrorism, he said, "The Shin Bet knew how to adapt itself to this threat, and to act through technological, intelligence, and operational means in order to track down the attackers ahead of time."

"At the same time, the Shin Bet continues its determined work to thwart classical terrorism," he added.

A few days after he spoke, the extensive threat posed by traditional terrorism once again became apparent, when the Shin Bet announced that it had thwarted a large-scale cell operating out of the northern West Bank city of Nablus.

The 20-man cell had been plotting severe, multiple attacks in the heart of Israeli cities, including a bombing attack in Tel Aviv. It also planned to carry out a suicide bombing and to plant explosives in Jerusalem, along with a shooting attack in the northern West Bank. Most of the cell members belonged to Hamas.

Israeli security forces seized explosive materials they described as "significant and of high quality," which were designed to be remotely activated via cellular phone.

Bomb-making material, firearms, and instructions on how to manufacture bombs were also seized. Two Hamas operatives from Nablus headed up the cell, the Shin Bet said.

The cell's exposure underlines "the motivation and efforts invested by the Hamas organization in the setting up of terror infrastructure in Judea and Samaria [the West Bank], with the goal of promoting severe attacks in Israel," a senior Shin Bet source added.

The relative calm that reigns in Israel and the West Bank these days is not only fragile, but also misleading. If Hamas and the other terror factions had their way, Israel's cities would be ravaged by one terrorist atrocity after another.