CNN's website published a bright, happy feature last week on "25 Influential American Muslims." The people profiled and given brief videos to discuss issues ranged from political figures and religious leaders to entertainers, "and they all have remarkable stories to tell," the network said.

In most cases, it's obvious that those featured carry influence in their fields. What's not always clear is whether that influence is positive.

For example, one political leader believes Jews disproportionately control American foreign policy. At least two clerics espouse harsh anti-gay sentiments rooted in their religious beliefs. Another hates the state of Israel so much, it's a disqualifying trait in any potential friend or ally.

CNN provides almost no context or background on those controversies, one of which directly and unfairly tarred one of the network's top anchors. The list was generated by interviews with more than 100 Muslim Americans, CNN said.

It offered no information about how those 100 people were selected, or what diversity in opinion or religious devotion they offered. But it's likely that those people skewed toward religious conservatism.

Only two of the 11 women profiled as influential are shown without hijabs. That might present a misleading image of Muslim life in America. In a 2017 Pew poll of Muslim Americans, only 44 percent said dressing modestly is an "essential" part of what it means to be Muslim. 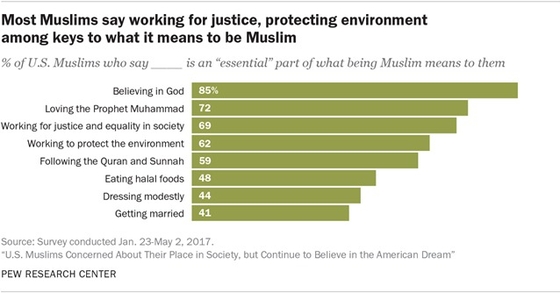 Among the 25 people CNN showcased, none is more controversial than Linda Sarsour. The network briefly acknowledges this, writing that "Sarsour has faced criticism for aligning with questionable characters and sharply denouncing Zionism."

Granted, the format does not allow for a detailed analysis, but "questionable characters and sharply denouncing Zionism" hardly covers the depth of Sarsour's radicalism and hate. She has allied with some of the most extreme clerics in the United States and spoke at a 2015 Nation of Islam rally led by Louis Farrakhan.

She praised Imam Siraj Wahhaj, an unindicted co-conspirator in the first World Trade Center bombing case, as her "favorite person in this room" and a mentor who "taught me to speak truth to power and not worry about the consequences."

Wahhaj described America as "a garbage can ... filthy and sick" and once discouraged Muslims from becoming politically active here, because "your leader is for Allah."

When CNN anchor Jake Tapper criticized Sarsour and others in the Women's March who lauded fugitive cop-killer Assata Shakur, last summer, Sarsour chose not to respond with an explanation, but instead lashed out, accusing Tapper of being part of the "alt-right."

"Nothing is creepier than Zionism," she wrote on Twitter. Zionists cannot be feminists, she argued. And in lashing out against two women critics, she wished to "take their vaginas away."

Sarsour, a national co-chair of the Women's March, has such strong influence that people are breaking from the movement because of the divisive leadership she and her colleagues have provided. The Women's March For All says it broke off "to return trust and faith to the #WomensMarch movement of America." It aims to restore unity "in eradicating division by bringing together under one umbrella all individual groups and chapters that stand firmly for the empowerment and civil rights of ALL women and stand firmly and unequivocally against bigotry..."

When it comes to Israel-bashing, U.S. Rep. Keith Ellison, D-Minn., is another influential American Muslim. Ellison is the first Muslim elected to Congress and, also like Sarsour, can't seem to escape connections to Louis Farrakhan.

He insists he is not opposed to Israel, but in private comments during a 2010 fundraiser obtained exclusively by the Investigative Project on Terrorism, Ellison complained that Israel and its supporters control U.S. foreign policy:

"The United States foreign policy in the Middle East is governed by what is good or bad through a country of 7 million people ... Does that make sense? Is that logic? Right?"

Ellison first tried to dismiss the recording as "edited and taken out of context" and then as "clip tapes and smears that the right wing is shooting at me." What he never did was say whether he still believes what he said at the time, or, when and why he changed his mind.

But he is influential.

Two of the imams CNN singled out have their own record of intolerance aimed at gays and lesbians.

For example, CNN describes Omar Suleiman as "The rising star," and an unnamed Muslim is quoted praising him as one of the "few imams who blend the spiritual and worldly aspects of the job" well.

But the Simon Wiesenthal Center considers him an anti-Semite, and he emphasized the Quran's view that homosexuality is never to be accepted.

"When Allah describes homosexuality as a repugnant shameless sin and details his punishment of a people that practiced sodomy, how can anyone who believes in Allah not find it immoral?" he asked in a video posted last year.

"If as Muslims we don't take a clear stance on this," he added, "we will be forced to conform and watch this disease destroy our children."

Other examples of his other retrograde views can be seen here.

This raises the question of whether CNN would run a feature of other religious conservatives, including people with similar views but failing to make any mention of it.

Similarly, influential imam Suhaib Webb is cited for his social media savvy, but CNN says nothing about his outlandish comments. Islamophobes, he said in 2016, intend "to create a Muslim genocide in this country. Omar Mateen's massacre of 49 people at Orlando's Pulse nightclub "was a gift to them," he said.

He then described a need to find a way to talk "around our positions" toward gay people:

In that same talk, Webb urged young Muslims to reject more liberal applications of their faith, rejecting the "very slick, if you will, appealing, irresponsible leftist message within the Muslim community, who if left unabated will leave us with zero orthodoxy. And what it will leave us with is just kind of the gift wrapping of Islam without the basics and fundamental principles which make us as Muslims and allow us to enjoy a life of faith and service for the right reasons."

In other talks, Webb expressed what applying orthodoxy means: He has claimed that effeminate men are cursed and that Muslims should fight gay marriage. He complained that American girls are "bad people" who they "don't wear any clothes." He accuses Jews of trying to kill Jesus and of being Muhammad's greatest antagonists, and he tells his congregation that animosity toward Jews is understandable.

He's an influential spiritual leader. This is his message as he understands his faith.

Webb's CNN video includes a different message. Muslims, he acknowledged, "are not monolithic."

CNN may have tried to demonstrate that point in its list of influential Muslim Americans. But it fell short. Too many of those showcased accuse others of hate while failing to look in the mirror. It would have been great to hear from reform advocates, ex-Muslims or more secular Muslims whose influence reaches beyond their identities.

That's a list that could trigger an interesting, and influential, conversation.