Your taxes are funding terrorists -- Demand that this stops

This article originally was published at Foxnews.com. 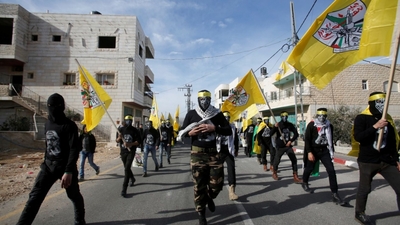 Tuesday is the due date for 2017 federal income tax returns – your deadline for tallying up how much of the money that you worked hard to earn all year goes to Uncle Sam to fund all sorts of important and worthwhile projects ... like supporting the families of terrorist murderers.

Yes, you read that right.

These payments make about as much sense as having American taxpayers send monthly support checks to the families of the Sept. 11, 2001 terrorists or the family of the Las Vegas gunman who murdered 58 people last year.

You might think the Palestinian Authority would be interested in spending more money on schools, housing, medical care, job creation and other things to improve the lives of Palestinians. You'd be wrong.

Faced with the possibility of U.S. congressional action to withhold aid, Palestinian Authority President Mahmoud Abbas not only placed it openly in the 2018 budget – he defiantly thumbed his nose in the face of the American taxpayer.

The U.S. funds do not go directly to the Palestinian terrorists and their families. But your tax dollars pay for other projects that enable the Palestinian Authority to divert $360 million for its terrorist support program.

This creates a perverse financial incentive to commit murder. While in normal society someone might worry that going to prison or becoming a suicide bomber would create financial hardship for his family, in Palestinian society the family benefits financially from terrorism.

One has to question a culture that makes it more profitable for its people, including its youth, to die while killing civilians than to live. Some would call that philosophy self-inflicted genocide. And it turns morality on its head – glorifying murder as a virtuous act of martyrdom.

In recent years, the Palestinian Authority hid its line item budget for terrorist payments. This year, however, when faced with the possibility of U.S. congressional action to withhold aid, Palestinian Authority President Mahmoud Abbas not only placed it openly in the 2018 budget – he defiantly thumbed his nose in the face of the American taxpayer.

Abbas stated in January: "There is something that the Americans are telling us to stop – the salaries of the martyrs and the martyrs' families. Of course we categorically reject this. We will not under any circumstances allow anyone to harm the families of prisoners, the wounded, and the martyrs. They are our children and they are our families. They honor us, and we will continue to pay them before the living."

President Trump signed the Taylor Force Act into law March 23. It is named after a U.S. citizen killed by a Palestinian terrorist during a March 2016 attack in Jaffa. Taylor Force was a former U.S. Army officer and West Point graduate who had served honorably in Afghanistan and Iraq, heroically risking his life in defense of America.

Force was a student at Vanderbilt University's graduate school of management at the time he was brutally murdered by Bashar Masalha, a Palestinian terrorist from Qalqilya in the West Bank. Israeli police killed Masalha and Palestinians literally danced in the street celebrating his "martyrdom."

To think that the Masalha family will now be financially rewarded for this heinous act is insulting to the Force family's memory of their son. To think that U.S. taxpayers – that means just about everyone reading these words – are indirectly footing the bill for these payment is outrageous and disgusting.

The Taylor Force Act directs the State Department to certify that the Palestinian Authority has ceased payments to terrorists and their families and to report to Congress any violations. Congress is then legally required to withhold funds until the egregious violations are corrected.

Has the State Department initiated an investigation into whether the Masalha family received any funds or financial benefits from the Palestinian Authority? If payments were made, that would be a clear violation of the law.

In light of the Palestinian Authority's 2018 budget and the comments by its leaders, the United States needs to take immediate action to cut the purse strings and turn off the spigot of funds that emboldens and incentivizes terrorists to continue to murder innocent men, women and children. Failure to enforce the law renders it meaningless.

Taylor Force deserves better than that. So do all the other victims of Palestinian terrorists who indirectly have received payments from American taxpayers.

If the Palestinian Authority is determined to pay blood money for the murders of innocents we can't stop it. But it is both illegal and immoral for U.S. taxpayers to foot the bill for support payments that incentivize and reward Palestinian terrorism.

I urge every American to contact President Trump and contact your members of Congress to demand that the Taylor Force Act be enforced, so that your tax dollars stop going to the Palestinian Authority until it ends payments to terrorists and their families.