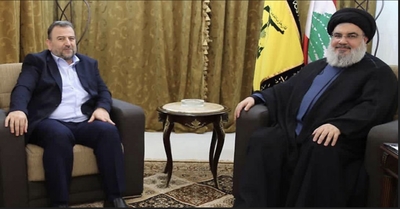 The meeting comes after Israel destroyed an offensive tunnel originating in Gaza and stretching into Israeli territory, killing several senior Hamas and Palestinian Islamic Jihad members. Al-Arouri and Nasrallah discussed "the Zionist aggression against Gaza and its ramifications," even though the tunnel was constructed to attack and abduct Israelis in a future confrontation.

The tunnel's construction started after the 2014 war with Hamas ended, according to Israeli military officials speaking to the Jerusalem Post.

Such a high profile meeting signals a major rapprochement between the terrorist organizations, after ties were formally severed in 2011 when the groups took opposite positions in Syria's civil war.

Arouri has led two Hamas delegations to Iran during the past three months to strengthen ties with the group's traditional terrorist state sponsor. He also helped facilitate the reconciliation deal between Fatah and Hamas, while remaining in charge of coordinating Hamas' terrorist activities in the West Bank.

While senior Palestinians officials around the world promote the unity deal to Western audiences as an effort to achieve peace, other Palestinian leaders from across the political spectrum explicitly call for Israel's demise.

"Gone is the time in which Hamas discussed recognition of Israel. The discussion now is about when we will wipe out Israel," Hamas leader Yehya Sinwar said Oct. 19, adding that "no one will disarm us."

But these seemingly diverse messages are not contradictory. The main Palestinian factions may wish to attain a temporary state on 1967 borders now, while continuing to fight for the Jewish state's destruction in the longer run.

Hamas' latest reconciliation efforts with Iran and Hizballah only reinforces the view that its primary objective is to militarily confront Israel – whether or not a Palestinian unity deal is struck.