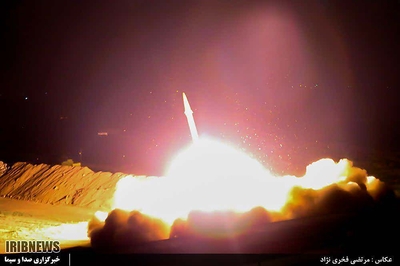 Iran's recent missile attack on ISIS targets in eastern Syria represents another escalation in the ongoing war between radical Shi'ites and jihadist Sunnis across the Middle East.

Iran, which is leading an array of heavily armed Shi'ite proxies and militias deployed in the region, fired a volley of six to seven missiles at targets located 700 kilometers away. It was in retaliation for deadly ISIS terror attacks earlier this month on Tehran's parliament and a shrine of Ayatollah Khomeini, who founded the Islamic Republic.

Israeli sources have reportedly said that most of the missiles missed their targets.

But more missile strikes could follow. Despite Tehran's rhetoric, however, those strikes will not target strong states in the region any time soon, a senior defense expert told the Investigative Project on Terrorism (IPT).

The Syrian strikes mark the first time Iran fired surface-to-surface missiles outside of testing programs since the Iran-Iraq war, nearly 30 years ago, said Tal Inbar, head of the Space and UAV Research Center at the Fisher Institute for Air and Space Strategic Studies in Herzliya, Israel.

"In this respect, there is perhaps a certain crossing of a psychological line. Ballistic missiles are seen as strategic weapons that are rarely used," he said.

Shedding light on the type of missile used, dubbed the Zolfaghar (apparently named after the sword of Imam Ali, the first imam of Shi'ite Islam), Inbar said, "This is the most advanced of a whole family of solid fuel missiles, that began with the Fateh 110 missile. The Fateh 110 missile exists in Syria, and according to many reports, it has also been passed on to Hizballah [in Lebanon]."

This family of Iranian missiles comes with advanced guidance systems, including satellite guidance, Inbar said, though their performance in the June 18 strike had to be assessed.

"It is a totally original Iranian missile. Here too, there was a message, in choosing their own missile. The range was not only the consideration," he said.

"The question is, will this be a one-off incident, or has a strategic and psychological dam been burst, and this will become routine?" Inbar asked. "We don't yet know if this will become a trend."

Iranian officials have, for their part, wasted little time in indicating that they are prepared to fire more missiles, as part of the ongoing war between the Salafi-jihadist Sunni organizations and Shi'ite Iran.

"If they [Islamic State] carry out a specific action to violate our security, definitely there will be more launches, with intensified strength,"
Gen. Ramazan Sharif of Iran's Islamic Revolutionary Guards Corps (IRGC) said on state TV.

The missile strikes were as much a media event for Iran as they were an operational attack, Inbar said. "It is clear from the footage that the Iranians prepared for this long in advance. There is video from hours before the launch. They brought in their TV broadcasters, and filmed preparations from a drone." The Zolfaghar is a "tactical missile for fast responses. It can be fired by trucks that appear and vanish quickly. But the Iranians did not use it this way here."

"The Iranians will not fire directly on too strong an enemy," Inbar said.

Emily Landau, head of the Arms Control and Regional Security Program at the Institute for National Security Studies in Tel Aviv, saw two messages in the Iranian missile strikes.

Washington "is no longer turning a blind eye to Iran's regional aggression and ongoing provocations – whether in the missile realm, fighting in Syria, or [its] harsh approach to the U.S. [President] Trump visited the region last month and placed Iran in the crosshairs," she said.

Trump suggested the U.S. would lead like-minded states in cooperation against Iran's hegemonic moves, and Iran is "trying to signal that it has capabilities that it is willing to use," Landau stated.

At the same time, Iran continues to claim that its missile program is for defensive purposes only. "So the stated reason for the attack is retaliation to the ISIS terror attack in Iran," Landau added.

Still, some figures in the Iranian regime used the incident to send veiled threats to Israel, Saudi Arabia, and the U.S.

"The Saudis and Americans are the main recipients of this message," the IRGC's Sharif said.

Israel now "has much to worry about," Al-Islam also said. Israel, he added, "understood the missiles' messages well. We are targeting terrorists only, and the countries that support them must know what it means when we use these missiles."

Israeli Prime Minister Benjamin Netanyahu fired back, saying, "The military and the security forces are continuously monitoring Iran's activity in the region. This activity is also about Iranian attempts to settle in Syria and, of course, to transfer advanced weaponry to the Lebanese Hizballah. I have a message to Iran: Do not threaten Israel."

However Iran proceeds, its long-term ideological vision to spread Shi'ite radical Islamism across the region and later, across the world, is no secret.

IRGC commanders have made a series of statements and speeches in recent months, documented by the Middle East Media Research Institute (MEMRI), that reflect this radical ideology.

IRGC commanders hold that Iran is only at "the first stage on the path to the spread of the rule of Shi'ite Islam in the Middle East and worldwide," MEMRI said in a report.

For example, IRGC Commander Ali Ja'afari declared that, "We are on the path that leads to the rule of Islam worldwide."

In another recent speech, Ja'afari added, "The Islamic Revolution is aimed at creating an infrastructure of the religion of God on earth, and it will wait for no man on its path advancement. All [Iranian] officials must adapt to the accelerated progress of the Revolution."

These sentiments were echoed by Ali Saeedi, who represents Iran's Supreme Leader, Ayatollah Khamenei, in the IRGC. "There is no doubt that the Islamic Revolution is a prelude to Islam becoming global," Saeedi said. "Therefore, the Revolution must be strengthened in the best possible way, in order to create the framework for the revelation of God's promise."

Esmail Qaani, deputy commander of the IRGC's overseas elite operations unit, the Quds Force, said: "Without a doubt, our martyrs and those of the dear ones like you Fatimiyyoun [an Afghan militia set up by Iran] will not settle for less than the global rule of the Imam Mahdi. Our martyrs inaugurated a great path. Syria and Aleppo are the temporary aims, and the main aim is global rule, which I hope is not far off."