Iran's Plans for the Disintegration of the West 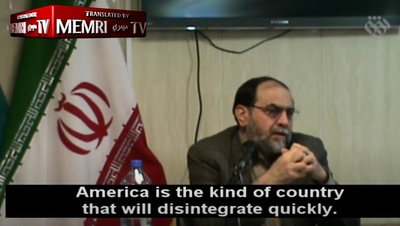 Protests following the police killing of George Floyd have spread from the United States to other Western democracies and Iran is loving it. The rioting and looting that initially engulfed the streets of cities in the United States and Europe is exactly what the Islamic Republic of Iran's strategists have wanted for years.

In 2011, following what became known as the "Arab Spring," I received a video of Hassan Rahimpour-Azghadi speaking to an audience outlining Iran's plans for a "global operation" and the "disintegration of the West."

Rahimpour-Azghadi, who calls himself a strategist, is no ordinary Iranian. He is a member of the powerful Supreme Council for Cultural Revolution, and many former Iranian political prisoners claim he was their interrogator in prison. Furthermore, it is said that Supreme Leader Ali Khamenei listens to two people, and Rahimpour-Azghadi is one of them.

Rahimpour-Azghadi's 2011 speech outlined how "the revolution is on its way" to toppling world governments and how Iran's "units are now present throughout the five continents."

In 2017, I posted a video of Iranian political strategist, Hassan Abbassi, the head of the Center for Borderless Security Doctrinal Analysis, which is affiliated with Iran's Revolutionary Guard Corps. Abbassi discussed the same plan of global operations and claimed that Iran has exploited the lack of proper vetting by Western countries, and has sent its agents and sleeper cells to establish firm roots on Western soil.

"We have 2 million Iranians there [in the United States]. Be certain that I will raise a guerilla army from amongst them against you." Abbassi said, ".... look how vulnerable you were on 9/11, when 4 Arabs from Saudi, who don't know how to fight, managed to endanger your foundations. Yet with us you face a nation even stronger. Don't forget we have 7,000 PhD holders in the U.S. ... If only 11 people created 9/11 do you realize what we can do?"

Abbassi's numbers are not accurate. There may be as many as 1 million Iranians in the United States, but many of them fled the Islamic Revolution. And the 9/11 attacks involved four aircraft hijackings, involving 15 Saudi nationals.

Regardless, Abbassi then emphasized his Trojan horse plan, which does not even have to be carried out by Iranians.

"We have people from all Islamic countries," he said, "...we will guide anyone who has problems with the U.S. We have identified the U.S.'s Achilles heel. We have all their ground, naval, air technology and their other vulnerabilities and we let the global guerilla armies have them. As it happens, we have set up a department for England too. we have the section for England's implosion on our agenda too. We will print T-shirts too, which will say 'Disintegration of USA.'"

What Abbassi meant by "we will guide anyone who has problems with the U.S." was explained to me by former Iranian diplomat Abolfazl Eslami, who defected in 2009 after the violent crackdown on Iranians protesting against election fraud.

"Every Iranian diplomat is assessed by how well they do in two tasks and promoted accordingly," Elslami said. "First, if they are stationed in countries hostile to Iran they should find organizations, media outlets, lobbyists or whatever, who are sympathetic to Iran and will help promote the Islamic Republic in those countries. Second, they should find disgruntled individuals who are hostile against their governments and introduce them to the embassy. Once they are assessed and evaluated they will be sent to Iran, where they will receive training in subversive tactics and sent back to their original countries, ready for when the moment is right."

The Washington-based, Middle East Media and Research Institute (MEMRI), published another video in February in which Rahimpour-Azghadi specifically explains how Iran must exploit and provoke racial tensions in the United States:

"... [W]e have to make our presence felt in the conflicts in America that involve blacks and people of color," he said "...If their media fabric and the oppressing structures [police force] loosen a little bit, America is the kind of country that will disintegrate quickly. I am not just saying this; I have traveled to America two or three times. I talked with different types in seminars. There are levels of hatred, alienation and estrangement there."

He then laments Iranian complacency in exploiting past U.S. racial tensions:

"There is hatred of various kinds there, and we are not taking proper advantage of it," he said.

He called for "several thousand of our surplus people" to move abroad, including to England, and "even get married to the local girls. This is how we will change things."

But if statements from Iranian leaders are any indication, the Islamic Republic has its own overt racism to deal with. In 2010, Mohamad-Javad Larijani, the American-educated secretary of Iran's Human Rights Council and a top advisor to Ayatollah Khamenei, publicly uttered the N word in reference to President Obama. In 2014, Iranian President Hassan Rouhani used a different racial slur against black people during a United Nations speech.

None of this means Iran has stoked the reaction to Floyd's killing. But it does show it has wanted to foment racial tensions in the West for years.

During December's British elections, several candidates had close connections or sympathies with the Iranian regime.

One, Ali Avaei, is the son of the Iranian's Supreme Leader's representative in Manchester. Avaei ran for the Liberal Democrats. Another candidate, Ali Milani, has expressed support for the Islamic Republic by appearing on Iran state TV and calling for U.S. sanctions on Iran to be removed. He ran with the Labour Party. Milani had a history of posting anti-Semitic tweets. He also can be seen in this 2014 video introducing former Labour leader Jeremy Corbyn as the guest speaker at the representative office of Iran's Supreme Leader in Maida Vale, London.

On June 3, New Jersey's Office of Homeland Security and Preparedness published an analysis citing "International Islamist extremists and terrorist groups continue to publish propaganda about US racial and political tensions to proliferate their deception that America is a corrupt state."

The bulletin mentioned Iran, and a transcript of a May 27 video tweet by Iranian Supreme Leader Ali Khamenei, which claimed "African Americans are deprived of human rights in the United States."

It was an ironic assertion, given how Iran deprives its citizens of their human rights, including the Baha'is, women, Christian converts, Jews, Afghan refugees, gays and lesbians and thousands of political dissidents.

It is not just that Iran is reveling in the current protests: these events will also make it easier for Iran to crack down on any future domestic protests. It will enable them to claim they are dealing with rioters as was done in the West.

Iran cannot believe its luck. Last November, it was receiving international condemnation for having brutally murdered 1,500 protesters. In January, it shot down a passenger plane on its own soil killing 176 passengers and still refuses to hand over the black box.

The current global protests and the initial violent looting and riots however, have made sure all that is forgotten for now. It is a win/win situation for the Islamic Republic of Iran.