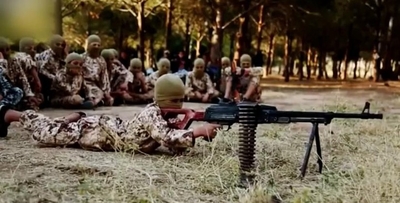 Children have become a key target group for recruitment by terrorist groups who are increasingly turning to social media to showcase their successful efforts in indoctrinating them for jihad. In January, for example, Wilayat Khorasan (or "Khorasan Province"), the Islamic State (ISIS)'s branch in the Afghanistan-Pakistan region, released a propaganda video titled, "Cubs of the Caliphate Camp," that showed young boys undergoing training for jihad.

Screenshots from the video showed young boys dressed in camouflage learning how to fire Kalashnikov assault rifles. The training center, likely located in Afghanistan's eastern province of Nangarhar, is reported to be the fourth such Islamic State training facility in the region.

Similar camps are openly flourishing in Syria and Iraq, where children are being actively recruited by ISIS to serve as the next generation of fighters for the terrorist group. A new report published in the Combating Terrorism Center at West Point's CTC Sentinel claims that in the past year, at least 89 male child soldiers were eulogized as "martyrs" on Twitter as well as the Islamic State's official Telegram channel. The child soldiers hailed from countries as varied as Iraq, Syria, Yemen, Libya, and Nigeria, Yemen, Saudi Arabia, Tunisia, Libya, the United Kingdom, France, and Australia.

Four percent of the child soldiers died conducting suicide missions and another 18 percent were inghimasis (meaning "to plunge" in Arabic) – that meant that the children fought alongside adults to attack enemy positions with light automatic weapons and subsequently killed themselves by detonating suicide vests, the report said.

The published photographs of the child martyrs showed a consistent "theme of happiness at the prospect of martyrdom." Children could be seen "standing in orchards and meadows, scenery presumably chosen to echo the paradise to which they thought they were destined."

Another important conclusion of the report was that, unlike other conflicts where child soldiers are a "strategy of last resort" and serve to replace adults in battle, ISIS' child soldiers "are fighting alongside, rather than in lieu of, adult males."

Recruiting children not only ensures a next generation of fighters for a terrorist group but it's also easier brainwashing young impressionable minds. "It's been done for the same reasons that Hitler had the Hitler Youth," Charlie Winter of the Quillam Foundation, a counter-terrorism think tank based in London, told NBC News.

"There's no term better suited to it than brainwashing," Winters added. "These children won't have any point of reference other than jihadism so the ideology will be a lot more firm in their heads and lot more difficult to dislodge."

In October, London-based Channel 4 News published a video that showcased examples of ISIS "nurturing a new generation for the Caliphate to fight infidels."Children undergo rigorous physical training and pledge allegiance to the terrorist group by declaring: "I must listen and obey even if I have to die."

A former instructor who escaped one such camp after being "disillusioned by the scale of violence" perpetrated by ISIS confessed that the terrorist group convinces children into jihad by telling them that "It's written in the Quran you have to fight jihad" and that "all of us will die martyrs and reach heaven, all of us."

Children who refuse to fight jihad on behalf of ISIS not only risk death, but also of torture and other punishment. In one horrifying example, ISIS chopped off a 14-year-old's hand and foot with a butcher's knife as a warning to other children not to resist taking up arms in support of the group. ISIS told the gathered children and teenagers, "This man is an infidel so we will cut off his hand and foot," and "All those who fight against us will have their hands and feet cut off."

Children also are encouraged to spy on their parents who, in turn, risk death if they object to their kids joining the terrorist group.

In July, ISIS released a video showing a young boy beheading a soldier serving in the Syrian Army under the watch of a senior militant near the ancient city of Palmyra. Earlier last year, ISIS released a video showing a boy who appeared to be younger than 15-years-old behead two alleged Russian spies. In another example, Khaled Sharrouf, who left Australia to join Islamic State fighters in Syria, posted a photo of his young son holding up a decapitated head of a man.

Groups such as ISIS have "aggressively targeted children for recruitment, providing free lectures and schooling that included weapons and other military training," a Human Rights Watch report said.

This was confirmed by a United Nations report that asserted that children as young as 12 or 13 are being recruited by ISIS to undergo military training in Mosul, Iraq. Boys who had been forcibly recruited by the Islamic State but managed to escape confessed to their families that they had been "forced to form the front line to shield" fighters as well as coerced to donate blood for injured fighters. ISIS also uses children for propaganda purposes, and the report cited an example of militants forcing two sick children at a cancer hospital in Mosul to pose for pictures holding the Islamic State flag that were subsequently posted on the Internet. 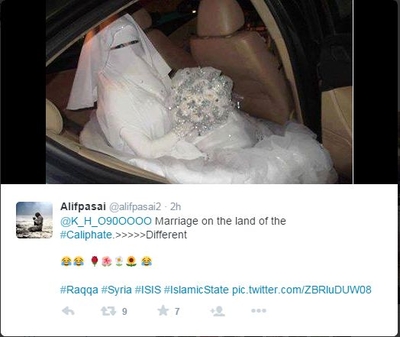 The Islamic State also has been using the Internet to ensnare young girls into jihad. Online chat rooms routinely advise girls "on how to discretely disobey their parents and sneak away" to the Islamic State. When girls express concern at the financial cost of taking the trip, they're told to "get in touch privately and we will help you out." The terrorist group has also set up a "marriage bureau" in Aleppo province of northern Syria for "single women and widows who would like to marry ISIS fighters."

Recruiting children for jihad is not restricted to just the Islamic State. A report on Jafrianews.com claims the Taliban has enlisted hundreds of children to wage jihad in Afghanistan and Pakistan since 2006. Several juvenile recruits join the Taliban willingly to avenge the killing of family members. The new volunteers then go through a "systematic motivation process" where "they are made to watch video films, showing physical torture and killing of Muslims [sic] women and children in Kashmir, Afghanistan, Chechnya and Somalia by what they call infidels," the report said.

In a May feature story on child suicide bombers, the CBS News program 60 Minutes noted that children as young as 7 are being recruited as suicide bombers in Afghanistan and Pakistan. "Children accept what you say after you talk to them just a couple of times," a Taliban commander said. "They can be used in rickshaw, bicycle or motorcycle attacks."

Training takes four to seven months, he added, and recruits were picked up for different tasks based on their abilities, including for the job of a suicide bomber.

Documents from the Joint Intelligence Group at the U.S. military prison at Guantanamo Bay included statements from detainees that detailed methods employed by the Taliban to indoctrinate children. "Taliban used hard-line interpretation of the Quran as a recruitment tool" and "[j]uveniles are more willing to martyr themselves due to their lack of reasoning on taking innocent lives," the documents show.

In the PBS documentary Children of the Taliban, journalist Sharmeen Obaid Chinoy interviewed Taliban commander Qari Hussain, who bragged recruiting children as young as five. "Children are tools to achieve God's will. And whatever comes your way, you sacrifice it," Hussain said.

Child recruitment also is widespread among terrorist groups operating in Africa. In Mali, jihadists recruit poor children from rural areas who have been sent to distant Islamic schools by their families, who cannot afford to pay for their school fees or to feed them. Sometimes the children volunteer to join the terrorist group for money or following indoctrination in religious schools.

In Nigeria, Boko Haram has been using girls between the ages of 11 and 15 as female suicide bombers to spread terror in the region. "It's easier for women and girls to slip into crowds where they can carry out mass atrocities than for men," Mausi Segun, a Nigerian researcher with Human Rights Watch in the capital city of Abuja, explained. "In northern Nigeria, the dressing of the woman gives her the ability to move about with all kinds of things undetected. She wears a long, voluminous head veil that reaches, sometimes, to the ankles - and also because security forces are not prone to searching women." 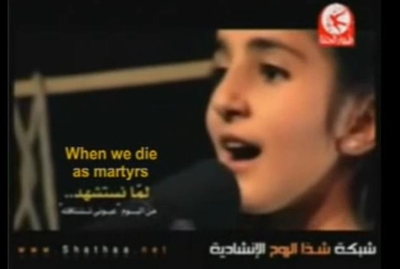 Hamas has used its media arm, Al-Aqsa TV, to indoctrinate Palestinian children and glorify jihad for years. In 2007, the television show, "Tomorrow's Pioneers" featured a Mickey Mouse knockoff named Farfour. For several weeks, Farfour and his child co-host urged children to violently resist Israel while touting the supremacy of Islam. After Farfour refused to succumb to pressure from "authorities" to give up his land, his co-host Saraa informed viewers that he had been "martyred at the hands of the criminals, the murderers, the murderers of innocent children...."