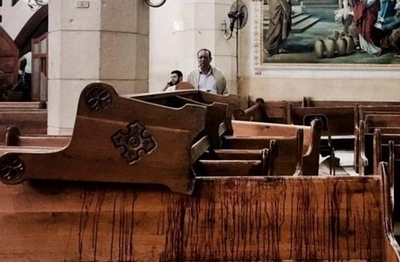 Suicide bombings of two Coptic churches in Egypt Sunday by ISIS terrorists should not be viewed in isolation. The bombings killed 44 people and injured 100 more, and mark the deadliest in a series of attacks targeting the country's Christian minority.

Many Islamists remain angry with the Coptic community for supporting al-Sisi after the 2013 ouster of President Mohamed Morsi and the Muslim Brotherhood's political party after a year in power. 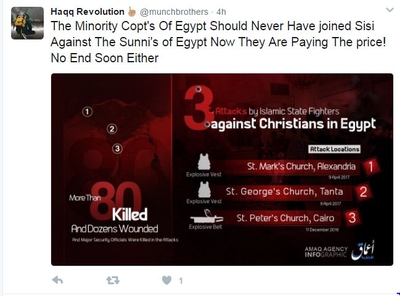 "The Minority Copt's (sic) Of Egypt Should Never Have joined Sisi Against The Sunni's of Egypt Now They Are Paying The price! No End Soon Either," an ISIS supporter identified as @HaqqRevolution wrote on Twitter.

Last month, ISIS's Al-Naba newsletter vowed that attacks against the Copts would intensify unless they convert to Islam or pay the Quranic tax known as jizyah. Al-Naba also attacked the Copts for supporting al-Sisi.

Al-Azhar University, Sunni Islam's most prestigious institution, spews anti-Christian statements and fatwas that label Christians as heretics. Al-Azhar distributed a free book in June 2015 describing Christianity as a "failed religion," and suggested that the Bible contains "seeds of weakness."

Building churches is a crime under Al-Azhar's curriculum which also suggests that churches should be barred in Muslim countries.

"Hence, it is a mistake to say that the attacks currently taking place against Copts in Minya and elsewhere are the acts of individuals [and not part of a larger phenomenon]. [Al-Azhar] students will continue to study until they attain a certificate or a license to preach at a mosque, and then they will spread what they learned among the worshipers," Egyptian researcher Ahmad Abdu Maher wrote last August.

"Fanaticism in Egypt is a matter of education, so there is need to reform the education received by [the members of our] society, who are raised on the concept of discrimination against the other," Al-Dakhakhni wrote. "[The change] must start in school – because fanaticism begins with religion classes that separate Muslims from Christians, so that the child discovers in his earliest formative years that there is an 'other' who is different and who must be shunned."

Government forces either are unable or unwilling to protect civilians, especially Christians, from ISIS in Sinai.

A Human Rights Watch (HRW) report issued last month criticized Egyptian security forces' response to ISIS attacks against the Copts. Over the past two months, 355 families have fled the northern Sinai city of Al-Arish, located near the border with Gaza and Israel. Of those, only 59 Coptic families have received housing.

Egyptian troops did nothing when ISIS established checkpoints hunting for Christians, according to a Daily Beast report. In one instance, ISIS fighters demanded to see a Christian man's ID card to check his religion and to see if he had a wrist tattoo common among Coptic Christians.

"Convert, infidel, and we will spare your life," the ISIS fighters said as they dragged him out of his vehicle. He refused. They shot him 14 times.

Christians in the Minya governorate, about three hours south of Cairo, face intimidation from terrorists, civil society and government alike, according to numerous news reports. Christians account for one-third of the 5 million people living in the Minya governorate. They have faced at least 77 sectarian attacks since the 2011 revolution that toppled former President Hosni Mubarak.

Police arrested several suspects, but the court declined to prosecute them. Instead, they were let go after reconciling with their victims. HRW notes that such enforced reconciliations deprive the Christians of their rights and allow their attackers to evade justice.

While al-Sisi promises to build Egypt's largest church, he ratified a church construction law in September giving governors latitude to deny building permits without the chance for appeal. HRW slammed the law, partly because it contains security provisions that could subject permitting decisions to the whims of violent mobs.

Muslim mobs destroyed four Coptic homes and six buildings including a nursery in the village of Koum al-Loufi, near Minya, in late June and mid-July, after Muslim neighbors claimed Christians intended to use them as churches, HRW notes.

In March 2016, an Egyptian court convicted four Christian teenagers and their teacher of contempt for making a video mocking ISIS that also appeared to mimic Muslim prayers. Three were sentenced to prison terms ranging from three to five years, while the fourth was sent to a juvenile detention facility.

In January, an Egyptian court dropped charges against Muslim men accused of beating 70-year-old Christian grandmother Soad Thabet and ripping her clothes off during a sectarian riot. Instead, the court prosecuted her son, Ashraf Abdo Attia, for adultery for an alleged affair with a Muslim neighbor's wife. Mob anger over the alleged affair led to the assault against Thabet last May.

A Muslim mob burned and looted at least 80 Christian-owned buildings in Al-Beida, south of Cairo, last June. A rumor that a building under construction could be a church sparked the rampage. Al-Beida police were unwilling or unable to stop the violence.

Muslim Brotherhood members torched the main Coptic church in the southern Egyptian city of Sohag. "And for the Church to adopt a war against Islam and Muslims is the worst crime. For every action is a reaction," a memo posted on Facebook by a local branch of the Brotherhood's Freedom and Justice Party (FJP) in Egypt's Helwan governorate said.

Islamists previously raised an al-Qaida flag over the church.

Sunday's attacks mark the continuation of a violence spree targeting Egypt's minority Copts. Al-Sisi needs to bring the full power of the Egyptian state to bear in the cause of reforming society to end it and end the Copts' second-class status.