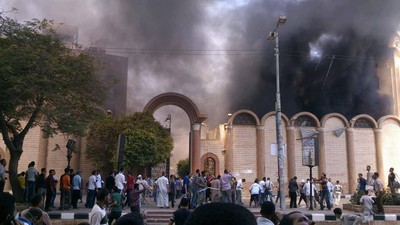 Egypt's Coptic Christian minority has become a favorite target for Muslim Brotherhood supporters and other radical Islamists across the country in the wake of the military's decision to clear supporters of ousted President Mohamed Morsi from their Cairo sit-ins this morning.

No sooner did security forces, backed by armored cars and bulldozers, clear encampments in the city's Nadha and Raba'a al Adiwiya squares did the Islamists turn to targeting Christian churches. Approximately 1,000 Muslim Brotherhood supporters set fire to the Churches of Abraham and the Virgin Mary in Menya.

Angry mobs also targeted churches, monasteries and other church properties in Alexandria, Suez and a number of other cities in Upper Egypt, according to Egypt's Al-Ahram.

Muslim Brotherhood members also firebombed Mar Geergiss Church, the main Coptic church in the southern Egyptian city of Sohag, burning it to the ground. Islamists had previously raised an al-Qaida flag over the church. St. Theresa Church in Assiut in Upper Egypt was also burned.

"It is a climate of violence," he added, "and the people are scared," Father Rafic Greiche, a Catholic Church spokesman in Egypt, told Vatican Radio.

Coptic priests and laymen have been killed, churches have been burned or scrawled with anti-Christian graffiti by Islamic militants across Egypt in the past month.

"These guys have been blowing places up and killing people in Sinai. They've been attacking churches all over Egypt – putting al-Qaida flags and Morsi's pictures on churches, so there is no question that the Brotherhood are the new terrorists," Michael Meunier, president of Egypt's Al-Haya Party and a Coptic Christian, said regarding the violent Islamist attacks against Christians since Morsi's fall.

Just last week, a 10-year-old Coptic girl was shot dead by Islamic militants on her way home from Bible school. Muslim extremists tossed firebombs through the windows of four Christian homes and a local church last Sunday to stop a Christian neighbor from building a speed bump in front of her home. The clash left 15 people wounded.

But if you ask some Muslim Brotherhood leaders about Christian-Muslim relations, things have never been better.

Muslim Brotherhood politician Abdul Mawgoud Dardery, who served in Egypt's dissolved parliament as a member of the Freedom and Justice Party, denied during a press conference last Friday held at the National Press Club in Washington, D.C., that the Muslim Brotherhood was anti-Christian.

Dardery was asked about the torture and violence that had been visited on the Copts by Brotherhood supporters during Morsi's year in power, but Dardery deflected the question.

"[W]e've had the best relationship for the past 1,400 years," he said. "Compare the relationship in Egypt between Muslims and Christians and many other countries in the world, you will find Egyptian model is one of the best models on the face of the earth."

The Muslim Brotherhood's year in power brought a litany of abuses against the Copts by the Brotherhood and its allies. Examples include its torturing opponents; deterring Copts from voting in last December's constitutional referendum; tolerating the assault on Coptic Christianity's holiest cathedral by Islamic militants in April; and quashing an investigation into the October 2011 Maspero massacre that left 30 Copts dead and 500 wounded.

Egypt's military moved on Islamist protesters Wednesday and dozens of people died in the fighting. It's a tragedy for all involved. But the Islamists' reaction – to attack a Christian minority that might comprise 10 percent of the country's population – is an outrage that exposes the depravity of their thinking. Scapegoating, conspiracy theories and attacks on innocent bystanders. They all show the hollowness of Dardery's platitudes and what the Brotherhood really believes about Egypt's Coptic Christians.

Today's destruction of Christian Churches and Muslim Brotherhood's liquidation of innocent Christian children in Egypt is the modern Islamic pattern for all those who've ever wondered why the ancient and peaceful CHRISTIAN NATIONS of Iraq, Kuwait, Turkey, Jordan, Syria, Egypt, Tunisia, Libya, etc. have become Islamic hellholes today. It's called: "Erase the Kafirs" from the world. Welcome to the Peaceful Religion of Islam. Christianity was 600-years-old in these wonderfully peaceful countries, until Islam's prophet called for a brutal way to create Islamic hegemony worldwide.

Stability and the Egyptian Military

Somehow I find it difficult to gin up any sympathy for dead salafists. The Egyptian military is merely doing what has now become necessary to restore order after 2 years of chaos. I predicted this would happen when the Mubarak regime was forced from power and so it has. A liberal democracy virtually anywhere in the middle east outside of Israel has always been something of a chimera. With luck, the generals will hold on to the reins of power until such time that the military can safely return to their barracks: 20 or 30 years sounds about right. :-)