Palestinians Turn Jerusalem Into a Tool of Terror 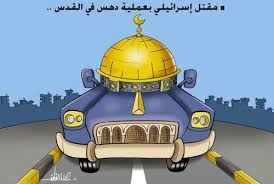 Palestinian and other Arab leaders threatened violence in response to President Trump's pledge to move the U.S. embassy from Tel-Aviv to Jerusalem. While Bill Clinton and George W. Bush also promised such a move as candidates, each backed off.

The terrorist who killed four Israelis in Jerusalem Jan. 8 by mowing them over with his truck expressed agitation after hearing a sermon at a local mosque criticizing Trump's embassy relocation promise.

The Palestinian Authority (PA) leadership reportedly instructed the mosques it controls to focus their religious sermons on the embassy relocation. Worse still, the PA promised the terrorist's widow a lifetime, $760-per-month stipend for her husband's "martyrdom for Allah."

Arab reactions to Trump's embassy plans are more heated than they were to those of candidates Bush and Clinton perhaps because of Trump's pledge to recognize Jerusalem as Israel's capital and relocate the embassy there from Tel Aviv, not only as a candidate (including during his address at last year's AIPAC Policy Conference) but also as president-elect, issuing public reassurances on the issue. Trump even planned to visit the Temple Mount as a candidate, although the visit never materialized and – as president – he said last Thursday that it was "too early" to discuss moving the U.S. Embassy.

Nevertheless, Palestinian and Arab leaders have warned that moving the embassy could lead to unrest and violence. Influential Iraqi Shiite cleric Muqtada al-Sadr called the idea "a declaration of war against Islam." PA President Mahmoud Abbas said he could revoke the PLO's recognition of Israel, while his Fatah party warned the move "would open the gates of hell."

Such declarations by political and religious leaders give a green light to Palestinians to react violently, as the Jerusalem terrorist truck attack shows.

Palestinian leaders, including the "more moderate" Palestinian Authority, regularly deny that Jews have any historical or religious connection to the Temple Mount.

PA Jerusalem Affairs Minister Adnan al-Husseini demanded an apology Sunday after United Nations Secretary-General Antonio Guterres said it was "completely clear that the Temple that the Romans destroyed in Jerusalem was a Jewish temple." The statement "violated all legal, diplomatic and humanitarian customs and overstepped his role as secretary general," al-Husseini said.

This is not the first time that the Palestinians, including the "more moderate" Palestinian Authority, manipulated Jerusalem into an incendiary trigger for terror.

As Palestinian Media Watch reported, Abbas led calls in 2015 for Palestinians to act violently to "defend" Muslim holy sites. He blessed "every drop of blood that has been spilled for Jerusalem" and presented violence in "defense" of holy sites and against the Jews' "filthy feet" as a religious imperative.

Indeed, the "stabbing intifidah" was launched in 2015 by false rumors that Israel was trying to change the status quo on the Temple Mount.

"Arabs are convinced that Israel is set on destroying, desecrating or 'Judaizing' Haram al-Sharif, the Jerusalem compound that includes al-Aqsa, Islam's third-holiest site," Benny Avni wrote in the New York Post. Such incitement persists, Avni noted, even though "Israel points out that the arrangements that have existed since 1967, when it seized control of the Temple Mount, Judaism's holiest site, are intact, and will remain so: A Jordanian trust, the Waqf, maintains the Mount. Jews can visit, but not pray there."

Writing about the 2015 "Stabbing Intifida," journalist Jeffrey Goldberg rightly pointed out that it was "prompted in good part by the same set of manipulated emotions that sparked the anti-Jewish riots of the 1920s: a deeply felt desire on the part of Palestinians to 'protect' the Temple Mount from Jews."

In the 1929 Arab riots, Arabs killed more than 130 Jews, and nearly as many Arabs died when British police responded. Among the findings of a subsequent investigation by the Shaw Commission was that "the Mufti was influenced by the twofold desire to confront the Jews and to mobilise Moslem opinion on the issue of the Wailing Wall" (in Jerusalem) and that one of the chief causes of the riots was "Propaganda among the less-educated Arab people of a character calculated to incite them."

Arab incitement against Jews happens regularly, often without the explosive element of Jerusalem. In a sermon broadcast on Hamas's Al-Aqsa TV in early January, a Hamas leader name Marwan Abu Ras, accused Jews of sending "AIDS-infected girls to fornicate with Muslim youths." He also claimed that Israel was allowing drugs to be smuggled through tunnels into Gaza, while blocking the entry of essential goods. "Their state is about to disappear," Abu Ras said. "...My brothers, know that people, stones, and trees all hate [the Jews]. Everyone on Earth hates this filthy nation, a nation extrinsic to Mankind. This fact was elucidated by the Quran and the Sunna."

But adding Jerusalem to Arab incitement against Israelis can make the resulting violence even more explosive.

Qanta Ahmed, a pro-Israel Muslim reformer who visited both the Jewish and Muslim holy sites at the Temple Mount, eloquently noted the Islamist thinking that enables the weaponization of Jerusalem: "Forbidding worshippers from entering holy sites in Islam, including non-conforming or pluralist Muslims who reject both the ideology and accouterments of Islamism is an impassioned pastime of fervent Islamists who foolishly believe only they are the keepers of our Maker..."

Unfortunately, Jerusalem has a long and bloody history of being manipulated by Muslim leaders into an explosive tool of incitement. But if Islam truly is a religion of peace, its leading practitioners should stop turning religious holy sites into weapons of war, and instead embrace Doctor Ahmed's tolerance.