The New Axis of Evil (or Comedy): CAIR, JVP and the Huffington Post 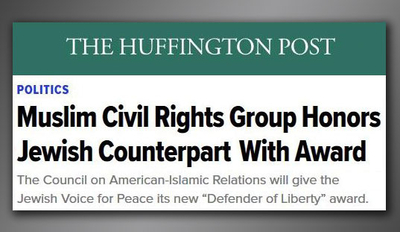 The Council on American-Islamic Relations (CAIR) has finally found a Jewish group it likes.

At its annual banquet on Dec. 17, CAIR gave its new "Defender of Liberty" award to Jewish Voice for Peace (JVP).

The Huffington Post ran the original story about this award, continuing its long tradition of running apologias for radical Islamist and Muslim Brotherhood front groups all over the United States as well as promoting virulent anti-Semitic conspiracy theories.

In 2012, the Huffington Post UK even hired Mehdi Hasan, a radical Islamist who has also proposed a one-state solution to the Israeli/Palestinian conflict – one which would lead to the slaughter of the new Jewish minority. He also was once caught on video calling non-Muslims "animals:" Hasan called on Muslims to keep "the moral high ground," adding: "Once we lose the moral high ground we are no different from the rest, of the non-Muslims, from the rest of those human beings who live their lives as animals, bending any rule to fulfill any desire."  And he nefariously blamed Israeli influence for the war in Iraq. David Duke would be proud of the Huffington Post.

CAIR's decision to honor a Jewish group may seem odd to those familiar with its anti-Semitism. Hussam Ayloush, the director of CAIR's Southern California chapter, has used the term "zionazi" to describe Israeli Jews. CAIR officials have repeatedly claimed that Jews control U.S. policy. CAIR has even invited a neo-Nazi, William Baker, to speak at several conferences, and attacked those who pointed out Baker's history. CAIR has repeatedly defended the virulently anti-Semitic Muslim Brotherhood cleric Yusuf al-Qaradawi, who has said: "On the hour of judgment, Muslims will fight the Jews and kill them."

Qaradawi has defended suicide bombings and is hostile to Jews, saying: "There should be no dialogue with these people [Israelis] except with swords."

CAIR is vehemently opposed to both the Israeli-Palestinian peace process and to the normalization of relations between Israel and the Palestinians. Despite claims to the contrary, CAIR officials have rejected a two-state solution and justified violence as a means to a legitimate end. "Our preference is peaceful negotiation...but if the peace process is flawed, then resistance is necessary," CAIR co-founder and executive director Nihad Awad said in 2001.  Awad addressed a rally outside the Israeli embassy in Washington, D.C. in October 2000, at which rallygoers chanted, "Khaibar, Khaibar, Ya Yahud, Jaysh Muhammed Safayood" ("Khaibar, Khaibar, O Jews, the Army of Mohammed is coming for you"), as well as the Hamas slogans, "With our blood and soul we will liberate Palestine," and "with our blood and soul we will sacrifice our life on your behalf, martyr."

Given CAIR's vehemently anti-Semitic background, it is hard to imagine any Jewish group that would be palatable to this "civil rights" organization, but in Jewish Voice for Peace, it found its perfect match: a Jewish group that is adamantly opposed to Israel and eager to retail Palestinian revisionist history and grievance propaganda against Israel. JVP supports Boycott Divestment and Sanctions (BDS) actions against Israel, targeting numerous companies for boycotts because they do business with Israel. It also has supported divestment campaigns on college campuses, succeeding in getting divestment resolutions passed at Hampshire College and Evergreen State College, and engaging in failed divestment campaigns at the University of California Berkeley and the University of California San Diego.

JVP's mission statement calls for "an end to the Israeli occupation of the West Bank, Gaza Strip, and East Jerusalem." Echoing CAIR's criticism of the U.S. alliance with Israel, JVP calls on the U.S. government to "stop supporting repressive policies in Israel and elsewhere." It even applauded former U.S. President Jimmy Carter for meeting with Hamas leader Khaled Meshaal, and called on Israeli officials to meet with Meshaal as well.

Marking its 28th anniversary, Meshaal's organization vowed "to remain faithful to the liberation of Palestine and to keep its weapon directed at the Israeli occupation only."

Meshaal also rejected peace efforts and wondered how "can anyone possibly have an excuse to abandon the path of jihad?"

"The Palestinians have reached the realization that negotiations with the (Israelis) are useless...the so-called peace process is futile. There is no peace. Only the path of Jihad, sacrifice, and blood (will bear fruit),"

So the first Jewish group that CAIR honors is a venomously anti-Israel one that retails propaganda against the Jewish state and ignores the genocidal anti-Semitism of its foes.

The "Defender of Liberty" award that CAIR gave to Jewish Voice for Peace ought to be regarded as a mark of shame for an organization which claims to represent Jews and work within the Jewish tradition while advocating for policies that would expose the Jews of Israel to greater danger, greater poverty, and greater international opprobrium.

CAIR, JVP, and the Huffington Post, all such staunch promoters of Islamist terrorist front groups, deserve one other.