Women's Flotilla About Everything But Helping Gaza 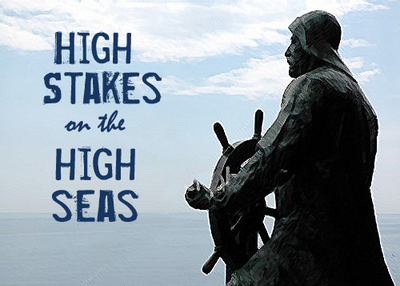 Arguably, more humanitarian aid flows into Gaza than ever before. And strong evidence indicates that Hamas chooses to divert significant amounts of construction material that should be used to rebuild housing in order to gear up for future terrorist attacks against Israel.

And so a flotilla aimed at drawing attention to Palestinian suffering hopes to set sail shortly and make it to Gaza by Oct. 1.

Its message: Israel is to blame for everything. It should willingly embrace suicide for its people by ending a naval blockade on Gaza that stops Hamas from importing even more weapons of war. The Women's Boat to Gaza's message for Hamas?

The boats will carry women only, in an attempt to put forth a more peaceful message, organizers say. Think of it as a sort of Lilith Fair on the sea for Israel-hating women.

"The Freedom Flotilla Coalition has decided to launch the Women's Boat to Gaza because we believe that it is essential to highlight the vital role women play not only in the resistance movement, but in the survival of the Palestinian people as a whole."

The ships will carry no aid, organizers say. Ending the blockade is the sole mission. Organizers insist it is illegal but offer no support for the claim. They ignore a United Nations investigation conducted after a 2010 flotilla ended violently. Passengers on the Mavi Marmara attacked Israelis troops who raided the ship to stop it from reaching Gaza.

"Israel faces a real threat to its security from militant groups in Gaza," the investigation found. "The naval blockade was imposed as a legitimate security measure in order to prevent weapons from entering Gaza by sea and its implementation complied with the requirements of international law."

But the blockade does not stop legitimate aid from reaching Gaza residents. It adds a measure of control. Aid to Gaza is peaking, especially since the recent rapprochement between Israel and Turkey opened the door to direct Turkish deliveries – 25 trucks daily – including food, toys, medicine and more.

That blockade isn't going away anytime soon, so the flotilla's actual benefit to the people of Gaza is minimal at best.

There are things the passengers can do to help, however, if their agenda truly is about improving life for Palestinians and not some feckless attempt to discredit Israel.

Start by condemning Hamas political leaders for making jihad a priority over improving living conditions. As much as 95 percent of cement meant for rebuilding Gaza gets diverted to tunnel building. The Los Angeles Times also described a concern among some Gaza residents that the money that does go toward home construction benefits Hamas insiders and mosques first.

This is no Israeli spin. Hamas and the Palestinian Islamic Jihad frequently acknowledge deaths and injuries to its fighters due to tunnel collapses during construction.

What benefit do any of these death holes bring to Palestinians today?

The boat women also can demand that Hamas stop indoctrinating Palestinian children with messages glorifying violent jihad and martyrdom. It has been going on for years. Simply put: It is indefensible.

Finally, a flotilla of women hoping to improve life for Palestinians in Gaza should say something about the treatment of women under Hamas rule. Something is amiss in a society when women riding bicycles creates a stir. Women in Gaza also cannot dance or smoke in public or have their hair done by men.

If Hamas were pressured into adopting a more peaceful agenda, Israel's justification for the blockade would crumble. Perhaps the boat women know this is a losing battle.

As Arab-Israeli journalist Khaled Abu Toameh showed last month, the Hamas charter has never been altered despite years of spin alleging the terrorist group somehow is now willing to live side-by-side with Israel.

Hamas sees the land encompassing Israel and the Palestinian territories as a religious trust "until the Day of Resurrection, no one can renounce it or part of it, or abandon it or part of it. There is no solution to the Palestinian problem except Jihad. The liberation of that land is an individual duty binding on all Muslims everywhere. In order to face the usurpation of Palestine by the Jews, we have no escape from raising the banner of Jihad."

Abu Toameh also pointed to a statement last month from longtime Hamas political leader Mousa Abu Marzook that promised, "The Zionist entity will not be part of this region. We will continue to resist it until the liberation of our land and the return of our people."

"Abu Marzouk did not talk about building new schools and parks for the Palestinians," Abu Toameh wrote. "When he talks about 'serving' the people, he means only one thing: recruiting Palestinians to Hamas and jihad against Israel and the Jews.

It is worth noting that previous flotilla efforts and land-based convoys worked closely with Hamas officials, with leaders from the terrorist group greeting the international travelers. And the women's flotilla could be no different. The Al-Awda Palestine Right to Return Coalition is among the groups endorsing the flotilla.

Al-Awda advocates "the rights of all Palestinian refugees to return to their homes and lands of origin, and to full restitution of all their confiscated and destroyed property," according to the organization's website. The group's logo is a picture of the map of Israel and a key. 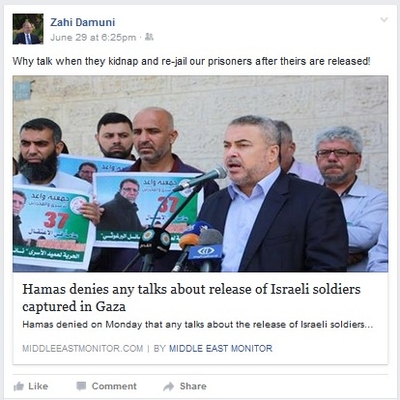 In the June Facebook posting at right, Al-Awda co-founder Zahi Damuni refers to Hamas terrorists in Israeli custody as "our prisoners."

The Women's Boat to Gaza effort coincides with other Gaza-focused campaigns. IHH, a Turkish charity with ties to Hamas and a suspected al-Qaida funder, announced plans to deliver meals to 600 Gaza families in a program called "Martyrs of the Freedom Flotilla." IHH organized the 2010 flotilla in which 10 passengers on the Mavi Marmara died after attacking the Israeli troops enforcing the Gaza blockade.

At least it's real assistance. There's a lot that Palestinian advocates can do to improve living conditions in Gaza. To do so, however, they must be willing to face some uncomfortable realities about why the quality of life has grown worse since Israel withdrew more than a decade ago. They can continue hating Israel and still acknowledge Hamas's failings.